In preparation to promote Fat Tailed Geckos to a top level category, we need to build a trait list for the genes and combos.

For each of these, we need to know what kind of gene it is (recessive/incdom/dom) OR what combination of genes represent it.

Please add anything that is missing or correct me where I am wrong.

If you know anyone that work with Fat Tailed Geckos, send them a link to this thread and ask them to help out.

If you feel comfortable editing then please do so, if not just reply below.

Mistakes:
Striped is recessive
Whiteout is co-dom with a non-viable super
Banded is normal.

This is why you are truly valuable to this community @westridge

It’s been my understanding that Stripe is a Dominant gene?

I could be mistaken.

I would call a Snow with caramel a “Caramel Snow”
As Amel Oreo (very very rare but still can be produced) is more of a true form of “snow”.

I would probably switch zero to super zero (basically a different line of patternless) as well in the Recessive section and put normal zero next to stinger. Supposedly it’s just a het patternless marker / different “lineage” of patternless at this time being (as far as I’m aware). A stinger is just a non striped zero so you could also have a “super stinger”.

And to clear anything up, there is a “super” version is stripe as well. But you can’t tell the difference between a 1 copy stripe and a 2 copy stripe unless you breed it / know the paring.

You could probably add starburst and granite as they are a poly genetic trait just like tang would be but not as common these days so it’s up to you really I personally don’t think they are necessary at this time may lead to more confusion when people search.

Just my opinion on what I would personally change. Thank you! And I can’t wait.

Aberrant, tangerine and Jungle are also all line bred traits as far as I know

I believe amel Oreo has proven to be lethal

You’re going to get a lot of debate on Stinger. Though, it is a polygenetic / line bred thing, associated with het Patternless. I would keep it listed with poly / line bred stuff. A “Super Stinger” (a false name, but a good descriptive tool for marketing) literally is a Patternless with the ability to produce Stingers.

Zero is the combo of Stinger + Stripe, and is NOT a simple-mendelian-recessive gene, so I would change that. It is the same poly trait that Stinger is, but just with a Stripe on it.

Super Zero is the combo of Patternless + Stripe, with the ability to produce Stinger / Zero.

If you would like to contact JMG Reptile, they can confirm the above. It was originally discovered by his dad when he owned JMG, and was found on some wild caught individuals, I believe. We discussed this together loosely before, but the more prominent breeders in the community would agree on the above, as well.

As far as everything else you listed, it looks correct to me.

Other combo names:
Snow (Oreo + Amel) …Unfortunately Oreo + Caramel has the same combo name. The AFT community still hasn’t fully duked that one out yet. Not sure how you want to approach the dual-name in your tags.
Purple Haze (Ghost + Oreo + Patternless) coined by Jessica Smith of Gecko Babies

AND since it will not let me reply above to a comment by Hellfire Exotics about how to tag Stinger /Zero / Super Stinger / Super Zero, I was directed to edit my previous replies instead so here we go:

Separating Super Zero/ Super Stinger from Zero and Stinger, will just create a dual-tag by accident that would indicate the same gene.
You’d have a bunch of het Super Zero and het Super Stingers, as well as a bunch of Zeros and Stingers, all different tags, but meaning the same gene. This will make it difficult for users looking up one or the other, and not getting the entire pool of animals that would actually meet their search criteria. One label for each should be used, not two.

It should be uniformly put under either line bred, OR recessive. It’s a tough one, since it isn’t a simple mendelian trait.

Personally: I would go for putting Super Stinger and Super Zero in as combos? Patternless + Stinger = Super Stinger and Patternless + Stinger + Stripe = Super Zero, since, essentially that is what they are. Stinger and Zero just associating with the pattern that occurs on the heterozygous Patt forms, and when you hit visual Patt, it masks the Stinger and Zero - but they are still there and should be accounted for. Combo would make this easy, and people using the search tool would have a better time locating what they need to. When they input Stinger or Zero then, they’d get ALLLL the results of them and their “super” forms, not just half the results like they’d get if their “super” forms were input as different genes completely (which they are not).

Almost all Amel combos have proven lethal, with the exception of a few lines of Amel. Oreo Amel has been produced before, which disproves its complete lethality.

Amel oreo has been made 100% . More than once. Even whiteout Oreo amel as well.

I wrote this out a cpl weeks ago… 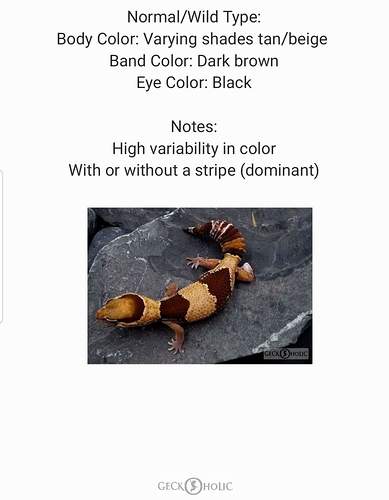 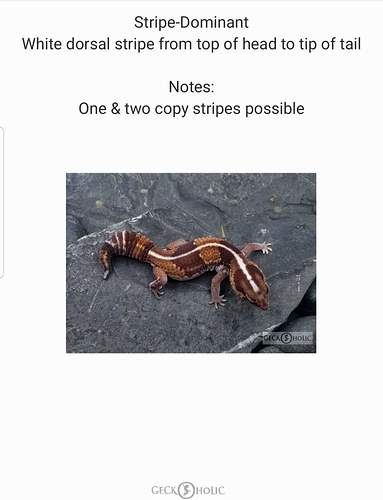 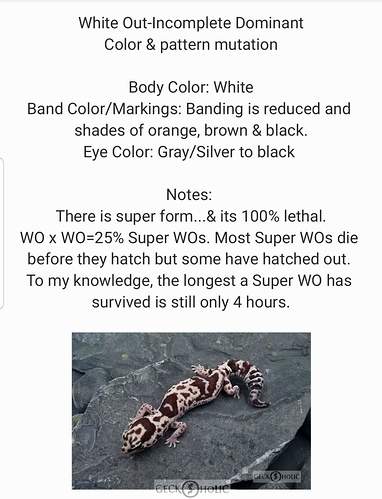 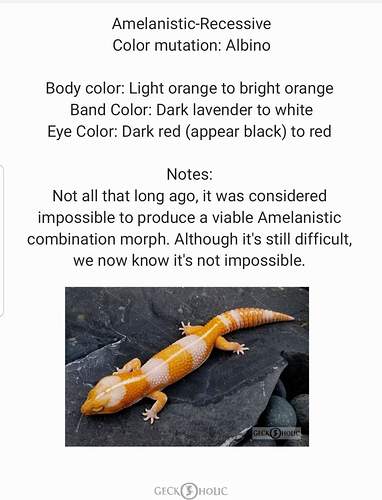 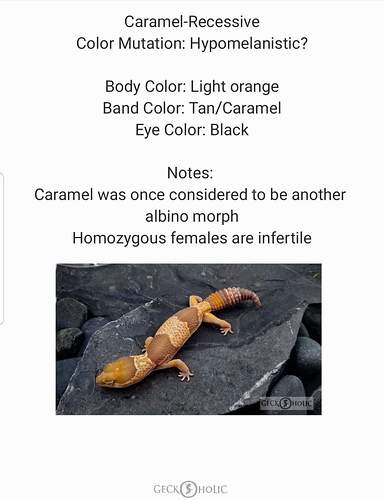 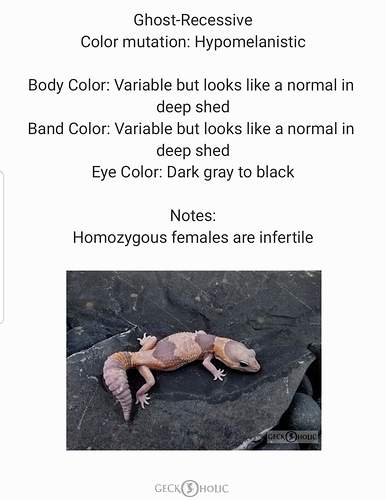 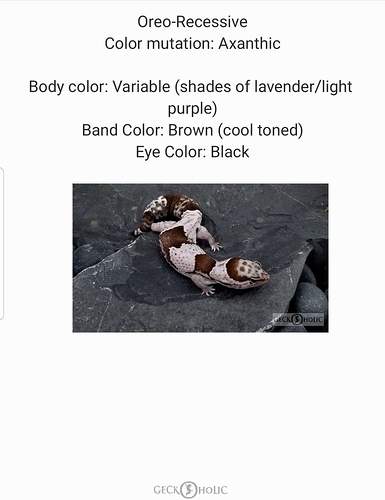 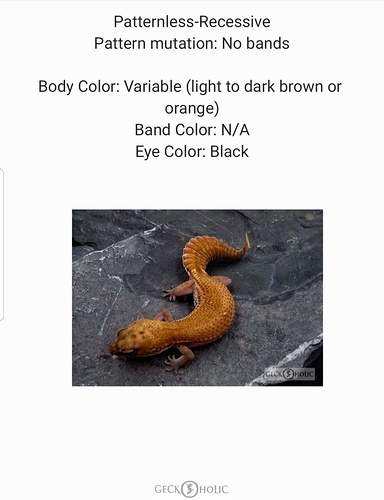 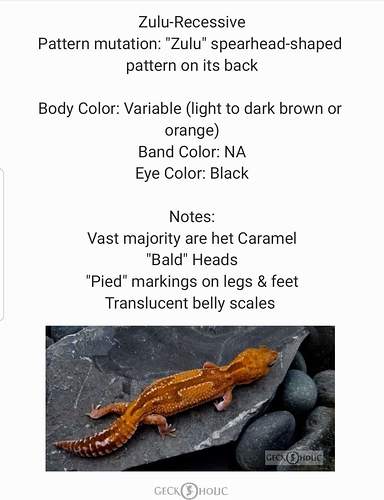 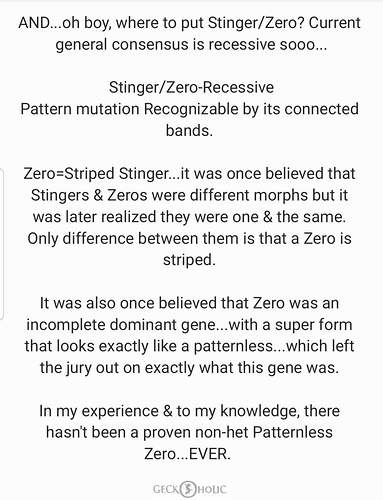 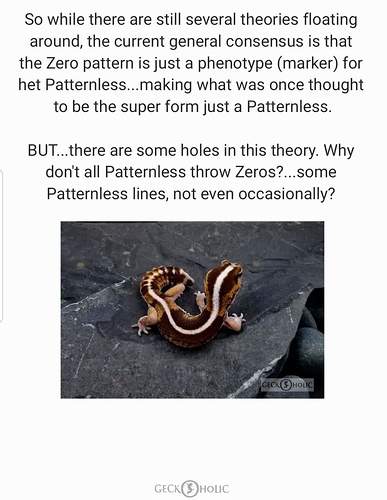 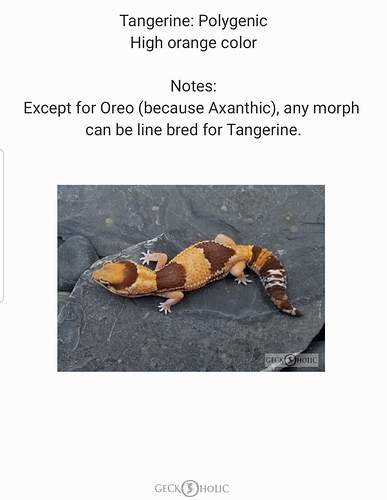 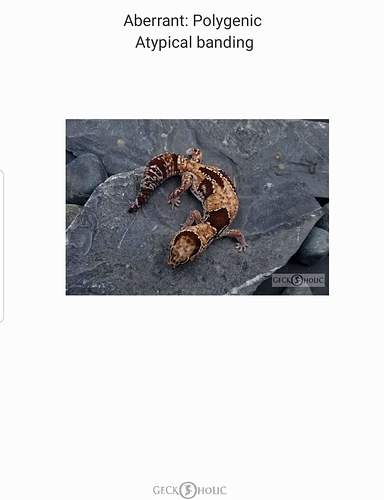 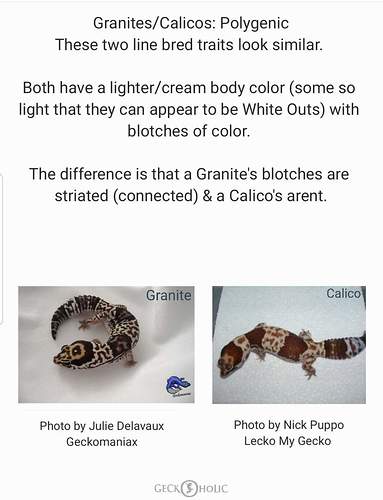 Stripe is not recessive

& while not easy, all Amelanistic combos have been successfully hatched now…

Not true, just that certain lines of amel are more compatible with other morphs.

Stripe is dominant, not recessive

I was hoping you’d post this. It’s so easy for new people to understand.