The struggle to get a full body shot is real. She is nearly impossible for me to manage with one hand since she is longer than I am tall lol. I did sit her in my yard to see if I could get some nice shots of her. Instead of staying on top of the plants she decided to hide in it. This is the shot I got of her before she went under them. 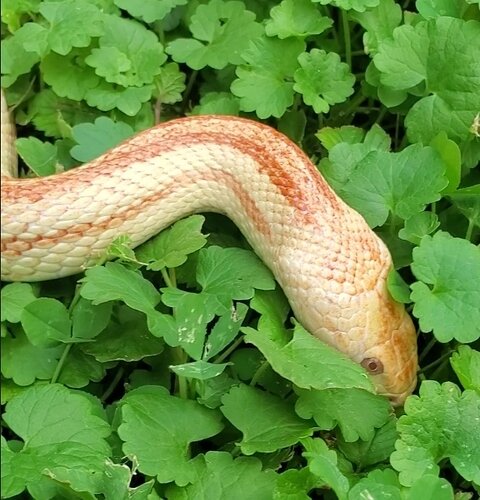 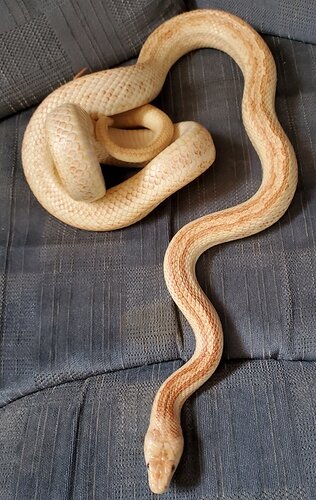 @imtooclosey88 I don’t think I am allowed to name breeders, that said I don’t believe they are selling on MM anymore as they sold all of their breeder females(or so they said). I also wouldn’t recommend them as they knew this girl was sick, didn’t tell me and aren’t willingly helping me with the vet bills. I am going through PayPal to try and get some money back from them as they went quiet on me and have been for 3 weeks now. Sucks too because they had great reviews.

ahh thats alright! do you know any breeders that sell that type?

Nope. As stated in my original post, she is completely unique from what I know. I can’t find anything online even slightly resembling her. Eastern rat snakes are highly variable throughout their range. I have heard that the ones from NC can (rarely) have stripes so her bloodline could originate from there. The greenish rats, yellow rats, and Everglades rats (all variations of the Eastern rat) are known to have stripes as well. None of them look like her as albinos though. None of them have that red/cream/white that she does.

So, I have had to get some testing done on her today as the antibiotics I was giving her had seemingly no affect. She has gotten a bit worse (louder breathing and more open mouthed breathing) but is still active and eating. Results for the many cultures I am getting done will be in a week to 10 days. I am hoping she hangs in there until then. She is so personable and I have already gotten a bit attached to her. She acts more like a lizard than a snake.

Eastern Black rats are my favorite snake. Very beautiful. I hope to get an albino some day.

I decided to help her out with her breathing while we wait for the test results. I know them having their heads angled up helps them breathe, so I got some small PVC pipes and made a cross bar of sorts for her earlier. She is already taking advantage of it and hasn’t been open mouth breathing as much since she started using it. 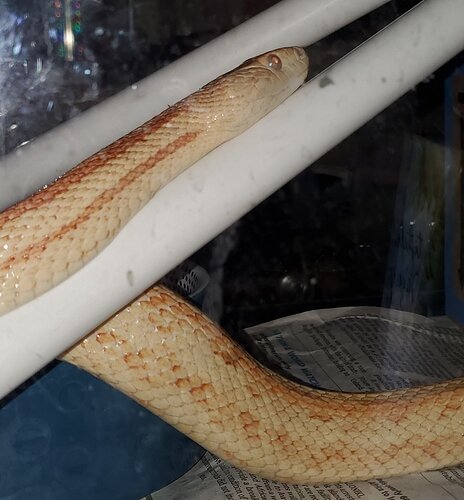 She looks comfortable. Hope she gets better soon. Good luck. Is she possibly a licorice albino?

Thanks, I hope the test results are in this week. And no, she isn’t a licorice. Licorice rats are white sided black/Texas rat snakes (black rats tend to get bigger than Texas rats and are not the same species from my understanding, but instead Texas rats are a subspecies). The albinos are really clean and don’t look anything like her. They only have a dorsal stripe and full white sides. The only thing I could think of is that she might be a darker colored/high red greenish rat snake(still an Eastern rat snake variant) albino. I have never seen an albino greenish rat snake look like her though. Chances are she is as she was advertised from the breeder (as stated in a previous post, some black rats in NC can have stripes). If she pulls through, finding a nice albino or het albino male that has stripes like her maybe tricky.

Turns out she is actually 6’1" (185cm) according to the tool for measuring snakes on the MM resource tab (http://serpwidgets.com/main/measure). Way bigger than I thought so I might have to make her enclosure slightly bigger now. Still waiting on the test results but she hasn’t gotten any worse in the past week.

Glad she is doing good. Saw a big male stripped rat snake on mm. Too bad he isnt het albino, but he is really nice.

I seen that one too. Looks like he might be wild caught with how big/scuffed up he is (he looks like he has a bad nose rub, common in wild caught snakes due to stress). Males in captivity rarely get over 5 feet. Though she doesn’t have solid/wide stripes down her sides like him, or any Greenish rat snake for that matter. The only stripe that stays but still fades slightly is her dorsal stripe.

So, got word from the vet earlier and the meds I was giving her are what the bacteria in her lung is weak to. There are 2 types of bacteria which is probably why it was getting worse for a bit as it just takes longer for the antibiotics to work. The vet said for me to start her back on the others, and I will be getting some antibiotics for a nebulization chamber in a couple days as well.

Gave her the first round of nebulization chamber treatment today, and will be giving her them for 21 days everyday. I also gave her another shot, and cleaned her cage. Even after all that she still ate just fine. She definitely isn’t one to get stressed or scared. Then again if I was 6’1" I probably wouldn’t either.