Funny enough today is pic update day! Everyone is growing and they all have little pot bellies from last nights crickets

You’re more than welcome to go through my portfolio and take any pics you need. And if you need anything else let me know, you know who I have

Hi, what morphs are you looking for?, I’d love to use some of mine as examples. Would you want them on a cork bark, or in hand, or on a particular colour background? At the moment I have around 30 hatchlings, along with breeders and grow ons also.

So I’m ideally looking for the following, if anyone has any, just message it to me and I can add. Credit will be given. It must be your pic of your gecko:

I’d ideally like pics that show off the certain trait but doesn’t matter if they are held or on a display, just as long as it’s good quality… what ever you are happy having your name too.

Think you’ve got all the rest of mine haha x

I have a great example for Crowned, and floppy crests!! Also a great patternless, and plenty of dalmations/Super dals. I have tigers, but they aren’t clean, they have dal spots.
Unfortunately I parted with my tri colours, and lavenders so wouldn’t be able to share those. How would I message you with these photos?, thankyou 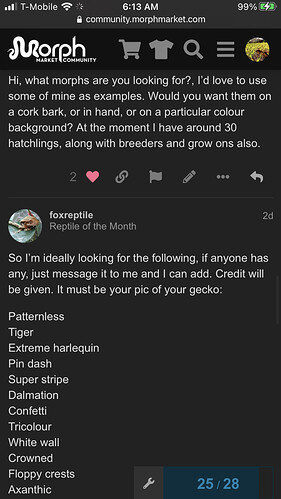 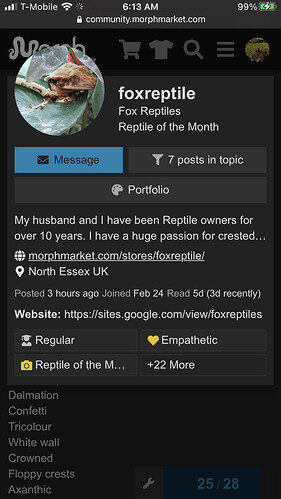 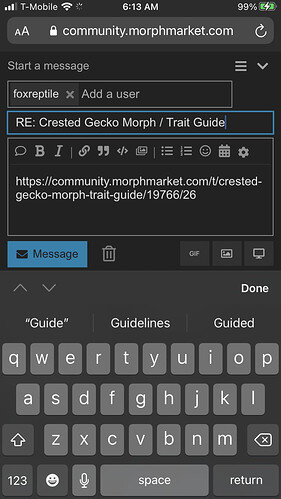 Tap on her user name, and then press message. And you’re all set

Can just post on here too, she won’t mind I’m sure

As @lumpy said. Send me a PM or I can send you one of its easier? If you still want to send me the Tiger pics I can still add them as long as the Dal spots don’t hide the Tiger pattern.

Somehow I hide that I’m actually in the conversation 😶‍🌫️

I sense a Lumpy lurking…

Here is a Dalmatian. 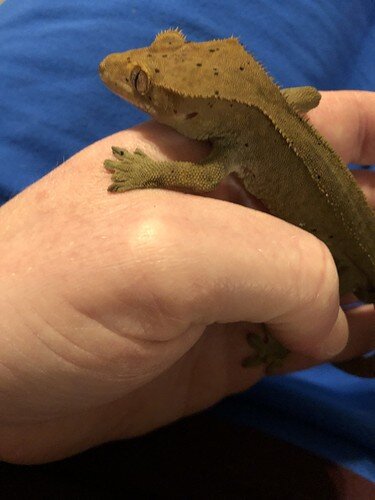 I love this post!
I am curious about the pink line from Fringe. Are they an official color yet?

Several breeders have named types of Cresties if they were the first to discover it and prove it out. I think the pink line & true pink from fringe morph is amazing, but unless it has the lineage from the original Cresties then you wouldn’t be able to use that morph name.

Unlike if you produced a harlequin, it doesn’t matter on lineage, it’s still a harlequin.

So morphs/traits are tricky. I’ve only done a basic guide that I hope to one day add every morph into. There are people out there that are trying to compile a list of what is in fact a morph/trait! We may be wrong about a lot of well known traits.

But pink Cresties do exist, so I guess pink can be an official colour trait!

Lovely dalmation, I can add it to the guide later in the week.

I’ve added some new pics @ghoulishcresties how could i not add in your new addition! Plus added Pongo (think I’ve got the name right).

If anyone would like me to add a morph/trait or pics of your crestie, just let me know.

Feel free to take any other images. Babies and all