Eating trouble, Newbee.. guys anyone help me help my guy

Hi everyone. Idk who is going to see this but I hope someone does, plus help me get my guy eating. I’m in need of some help. I purchased this Het genetic stripe, He was delivered to me 3/24/20 his birth year is 2019 don’t know the exact date. I have a tank set up a 29 gal tank. Yes that may be to big for him but it has 2 hides vines there’s my set up. I uploaded a picture of my setup to much to post. I have a jump start to control the heat temperature also the humidity is at 50-55 % heat is about 85-86 you can see his head sticking out the wooden hide in the picture. I really like him a lot. I do he’s my guy! Since I’ve had him he won’t eat? He pooped yesterday he did it in the water bowl. I’m like ok yea he’s gonna get hungry soon after digesting. I tried fuzzy he won’t take it. I bought live hopper mice/ rat he won’t take that either. I weighed him on 3/28/20 he weighed 140g then 3/30/20 he weighed 143g today he’s at 137 I’m just concerned I would like to see him eat since it’s been about 9 days since I’ve had him. 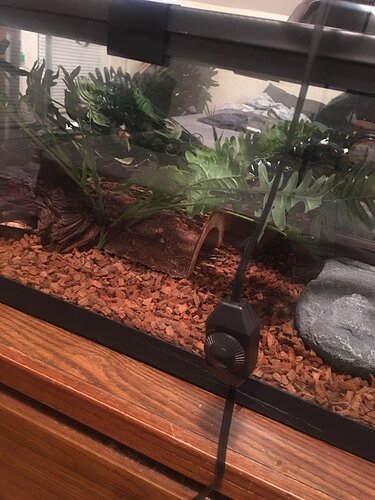 Yeah hes probably more than likely not eating from the tank being too big. I would divide it in half with some cardboard and see how he does

The standard advice for new ball pythons is to wait a full week of not bothering them at all before offering food. Which would mean today would be the usual time to first time to offer food if I’m reading the dates right.

There are a few tweaks you could make, so maybe make those now, and then leave him alone for at least 5 days except to visually check temperature/humidity and that he has water.

It’s good you’re being proactive, but it doesn’t sound like it’s time to get overly worried. Try out these things and do your best to make him feel like he is invisible for the next week.

It can take a while for them to settle in. He may not feel secure since the tank is rather open. Blackout 3 sides of the tank and replace the half log hide with a hide with only 1 opening.

Like already stated, it might be because the tank is too big, but ball pythons are pretty finnicky, so just some things you could maybe try, many of those have worked for me:
Glass tank: try covering up three sides of the tank, he might feel too exposed.
Leave him alone for a while (unless he’s getting too skinny). Offering food too often or interacting too much during the time he needs to get used to his new environment is a common cause of stress.
If you thawed the fuzzy at room temp, you might try heating it up. My favourite snake, Sammy, will absolutely not take live, but he does prefer his rats to be slightly above a live rat’s usual body temp. Thawing in warm water will do the trick. If you want to preserve the scent, put the mouse in a plastic bag before putting it in the water.
How do you feed? tongs coming from above might intimidate him-birds prey on bps in the wild, so he might be in survival mode, not feeding mode. Maybe try leaving him alone with a mouse (a dead one, never leave your snake alone with a live prey item) placed directly in front of the hide he’s in.
How many hides does he have? Because he might not recognise the half log as a safe place.
Is the room dark when you feed him? Many bps will feel more comfortable eating in the dark/at night, since they are nocturnal.
Other than that… how does he react to the food? Is he at all interested?
What exactly did the previous owner/breeder feed him? Sometimes balls will even be picky about the colour of their prey, so I’d suggest asking about his previous feeding schedule, enclosure, prey etc.

I would not worry too much yet, though. Yes, he lost a little weight, but that may also just be from pooping. Most likely, I’d say. Monitor his weight, try implementing some changes to make him feel safer and there’s a good chance he’ll eventually eat for you.
I can fully understand your anxiety, though. When my first snake wouldn’t eat, I was honestly close to tears. Many new ball python owners experience something similar, I think

Cool thanks for all the response. I definitely will cover the 3 open sides of the tank. He does have a hide that has 1 opening he spends most of his time in that. Now the temperature on the heated side is directly under the tank with his hide on top of it. I don’t have a temp gauge that I can set in the middle of the tank to get a accurate reading of what the temp would be in the middle. Every night he comes out flickering his tongue Roaming around - nocturnal. Yesterday he seem interested in the dead rat, but did not take it. I was using tongs to try and feed. I will cover the tank and throw a fuzzy in there tonight. All I have right now to cover the outer tank is cardboard, I’m going to have to use that.

Wait a week for each feeding attempt. Don’t over do it or you will stress him more. Cover 3 sides, make sure your temps are right and safe, and leave him be for a week. You can also drape a towel over the tank if you need to. Do you have an UTH with a thermostat? Do you have a thermostat at all? Also, you need 2 hides that have 1 entrance.

I have a zoomed digital thermometer with a probe. That probe is right next to the jump start thermostat probe. That’s where I get my reading from under his rock type hide he’s always in. I also have a Temperature gage above his hide and there is a heat lamp above it. I know about those gauges and how inaccurate they could be that heat lamp I don’t keep running all day it’s off while I’m at work and on b4 I go to bed.

. My jumpstart is set to 83 degrees and the digital thermometer reads 89.9 well after that I turned off the lamp because he stuck his head out I already have a fuzzy that ready for him. I open up the tank I was swinging it back and forth he struck 2 times but

he missed now he’s back in his hide so I left the fuzzy there for him I hope he takes it. I was not expecting those quick strikes! 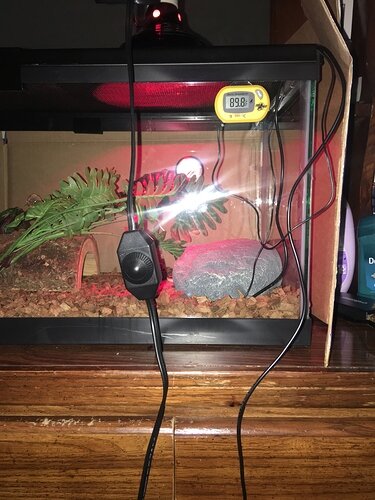 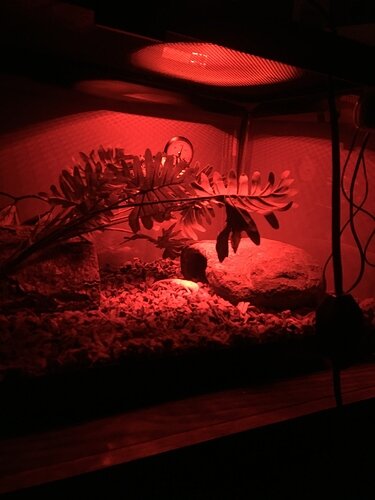 Hopefully he eats the one you left in there. Otherwise, my biggest recommendation at this point is to leave him completely alone for a full week except to visually check temperature/humidity and that he has water.

Strikes where a ball python doesn’t grab the prey and then goes to hide are usually defensive strikes out of feeling stressed and scared.

Can we see the whole tank?

And the tank lid?

It is best not to have them bother the snake. 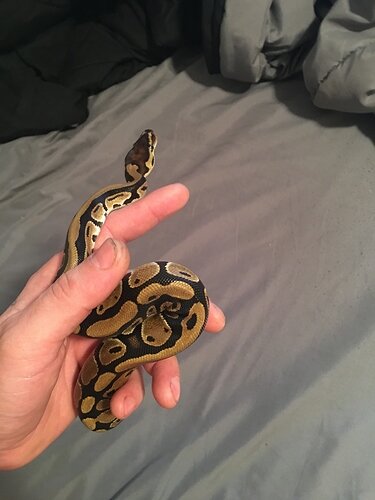 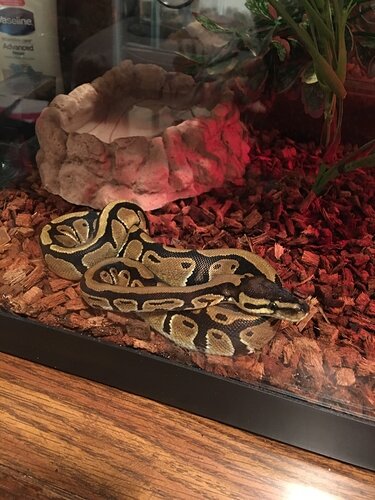 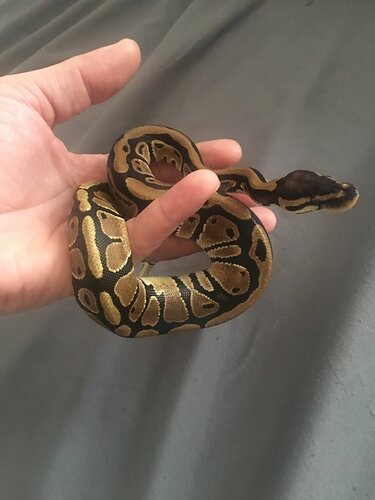 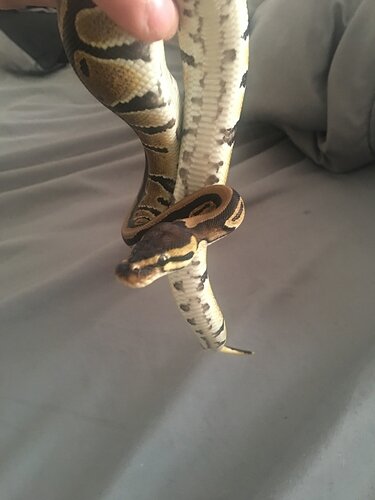 I would
Like to thank everyone that gave me great tips on what I should do. I waited almost just about a 2 weeks. I covered up the sides of the tank. Left him alone. Thawed a fuzzy n heated it nuke warm. He took it. I’m stoked