If you had $500 to start a collection

So I’m not new to ball pythons, I used to have a small collection that I need up selling before I started graduate school. Now, 5 years later, I realize how much I miss their irresistible little faces and want to start back up again.
Given the current trends and prices, and what morphs seem to be most desirable, if you had $500 to invest in getting one (or several) balls to start out, what would you get? I know it’s not much, but definitely enough to get started.
A bunch of hets? One snake with multiple “genes”? A breeding pair? This has been kind of a fun game I’ve been playing over the past month and was curious what others would choose.
I have access to an unlimited amount of mice as well, so cost of food doesn’t factor into my decision at all

Buy females. You have 2 years of feeding and growing before they will be ready get your male a year or year and a half in.

But like you said you aren’t new, you probably know that.

I would start building into a recessive. Just seems like that’s where the value is and give you long term potential. I would try and get a couple het females. It’s going to cost a lot more than that eventually…but if you could get 2 or 3 girls and start growing them up that’s a start.

Depends on what you like! I’d take the time to browse the market and find some genes you think are gorgeous within your price range and move from there. Personally I’d try to find two normal adult females and one very nice multi-gene male. Depending on where you live you might be able to get a steal too. I live in Southern California and have had some amazing deals come to my door…

I mean $500 initially can get you a few animals whatever you decide but there’s a lot more expense coming in the years before you ever produce a clutch. Gotta be ready for the long haul and an investment of most likely several thousand at least before you start seeing money. Lots of ways you can go…you just have to plan ahead.

You could easily get a nice little start into the hobby for 500. The real question though is do you want co dom or recessives? For recessives you could get a visual pied or clown male and 2 or 3 hatchling het females. And if you want visuals quickly you could get a male banana combo like a banana Mojave and then get a couple of normals. You could probably get about 4 to 5 normal hatchlings and then the banana combo as well since normal hatchlings are like 20 to 50, but in the end it’s your choice on what you want to do and get involved with what Gene’s you like.

Thanks for all the opinions! I really enjoy hearing everyone’s suggestions. I’ve been looking around for about a month now and figured it’s kind of a fun game since everyone has a different “strategy”
My favorite morphs are bananas and piebalds, so my dream pair would be a banana het pied and a regular pied and go from there, which would likely run over $500, but might be doable.
There’s some pretty cool clown morphs out there as well which are pretty tempting! When I got out of ball pythons I gave my pair of het VPI axanthics to a friend, so he will likely give me back one or two of the offspring at some point, so I will have those as well.

I’ll mirror the advice to wait on getting your male. I’d sink all the $500 into the single best female you can find right now. Next year another female within the same project. The following year pick up the male. If you get your male now he will be able to breed far before the females. If you had waited you could have got more male for your money.

Banana pieds are really cool. Banana is unusual in that it is sex linked thus females are generally more expensive. The ideal scenario would be to find Pied female then in a year or two pick up a Banana het Pied male. Banana is a dominant mutation and you only need one parent to produce visual bananas.

Being sex linked, and assuming you purchased the more common and lower priced “male maker”, all bananas would have a very high probability of being male. Fun clutch for sure!

Yes, that’s what I was thinking! I’m actually a geneticist, so this is right up my alley

I’m hoping to collaborate with someone at my institution at some point to sequence a few ball python genomes, because it would be really helpful if we were able to test for hets just like I do with my mice. But that’s its own complicated project…

As much as I hate to sink that much money into a single snake to start, I think your advice about getting a nice female and letting her get up to breeding size first is pretty solid. Maybe I’ll start looking for a nice female pied since that seems to be the logical place to start. Then if I get an axanthic and/or banana male I can go either way

Deciding whether to go for more valuable versus more animals is always difficult. My first ball python project is focusing on dreamsicles (homozygous pied / homozygous lavender albino). Three primary tiers to get into it: Dreamsicle level ($2000), Pied het lav level ($1000), or Double het Pied/Lav level ($400). My philosophy is to strive to get the highest level possible. Each animal costs the same to feed/house regardless of its market value. Optimizing efficiency means better eventual returns and that much more I can put back into it and grow my collection. It’s a continual balance of what can I actually afford and how can I convince the wife?

Post up some pics and let us know what you end up with!

I follow the others to some extent, I would go for a visual pied girl, but preferably het for something else like albino. I don’t know how much they cost in the US but I got my pied het albino girl for € 265,00 at Hamm expo. The difference between pied and pied het albino was not even that big. Than you still have some money left for an other co-dom girl like pastel and for example enchi, orange dream, yellow belly, mojave or anything else you like. They don’t even have to be to expensive because even simple genes like pastel and yellowbelly, enchi, mojave ect. Look great in pied in the future.

You still have two year to save up for a real nice male like banana pied. Preferably het for the same as the pied girl. They might not be cheap but we are still taking hundreds and not thousants of dollars.

If the pied girl takes more time than three years, or if you are really unfortunate she doesn’t lay eggs, you still have an other nice girl waiting. It’s nature so I would not put all my luck on one girl knowing it takes at least three years to mature another if anything goes wrong with the first one.

You can pair the male with the pied girl and get 100% pieds with or without banana. If they are both het for ( for example) albino about 25 % is even double visual recessive and the others are 66 % het for albino.

If you pair the male with the other girl you can get some nice different combo’s that are all 100% het pied and 50% het albino ( or whatever het you choose).

If you keep one male offspring with most visual genes from them than that will also give you a nice start for the next step, pairing him next year to your pied girl. This will then bring some new pied + co-dom combo’s. So with three snakes to start with, you can already create several different combo’s and it can give you a nice start for the longer run. Like maybe go for supers in the future.

I always think it’s good to bet on more “horses” or snakes in this case, and to look for something that can give you more roads in future, because after several years getting pieds and banana pieds you might be getting tired of them and want something else to come out of the eggs without waiting another three years for a girl to mature.

Thanks! My current plan is to start with a visual clown female (I decided to go with clown instead of pied), and hopefully in the upcoming year add another female, likely a blade het. clown as a backup (good idea @lindasark). That will probably bring me up to my $500 mark.
Next year I’ll look for a male banana het. clown and hopefully get a male VPI axanthic back from my friend.

That would give me the possibility to make both Axanthic and banana blade clowns, both of which are super cool and relatively newer morphs as compared to some of the pieds.

Solid beginnings of a plan. Clown is massive and will continue to be. It’s next on the menu for me as well

Thanks! I was on the fence between pied and clown, but it seems like more has already been done with pied than with clown and I want to adventure a bit!

Clowns are incredible. Hard to argue against them and pieds being at the top of the ball python game as a recessive base. Great plan!

Het clowns for sure, so many possibilities and probably not even fully explored but we can all have a bloody good go trying.

Desert ghost is the future imho. I would get a few DG hets, or a DG female. There isn’t anything Ive seen that rivals DG as they age. Everything looks amazing when they are hatchlings, then they dull out for the most part as they become adults. Not DG, its the opposite! Like wine, they get better with time.

Pieds are always a nice choice and there are plenty of combo options. 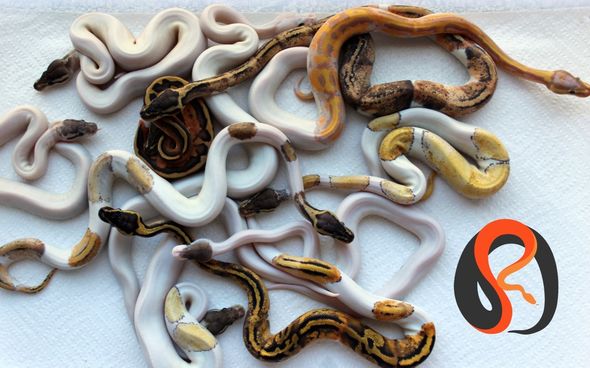 Sounds like a good plan. I chose pied because you mentioned pied yourself ( and I love them too) but clown is also very nice instead. Love banana clowns. And always good to have two ressecive genes to start with and an extra girl.

With clown, banana and axanthic I immediately also think about pastel, and fire after that. And I don’t know how you feel about spider but with axanthic and clown they are also great. Love the black and white snakes, and even though I know axanthic gets more brown in time, dark brown and white is still beautifull and fire gets lighter in time. With clown spider moves the patern all up to the dorsal side. I know super blade does that too in clown but I really don’t know what blade does to VPI axanthic. In morph market and google there are almost no examples on blade and vpi axanthic combo’s. But if you are really up to adventure it’s maybe nice to find out yourself.