Is this an old egg that was passed?

Recently came home from a 3 day trip looking at houses out of state to find my big Lavender Albino girl I got 3 weeks ago passed something odd. I’m a newbie to ball python keeping/breeding. I never saw anything like this with my boas. Could this be an old egg that was bound up and didn’t pass until now? On top of that when I pulled her out to clean her cage I noticed a persistent mistakable popping in her breathing, I assume early stage RI. My quarantine room is spot on, 83 ambients / 90 hot spot, reptizorb for substrate in an ARS rack. Clean setup. I definitely didn’t noticed any popping until now. I’m surprised she would develop an RI in my care given my attention to husbandry. I guess a vet visit is in order? Does this look like an old egg?

I moved her into a secondary quarantine room since she is showing symptoms and I have other animals in quarantine. Glad I picked up an extra rack for that purpose! 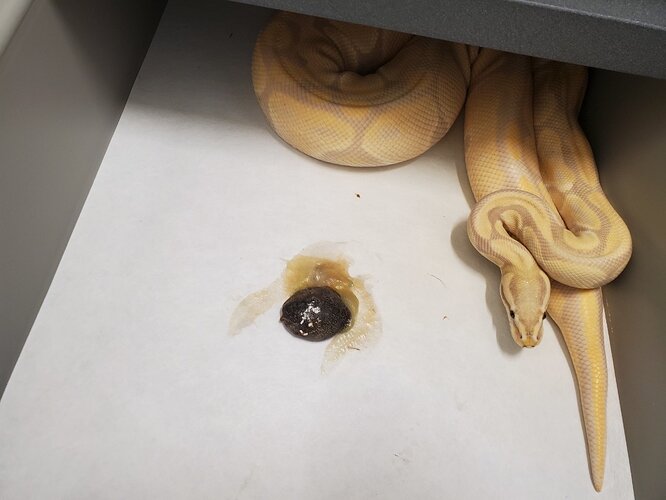 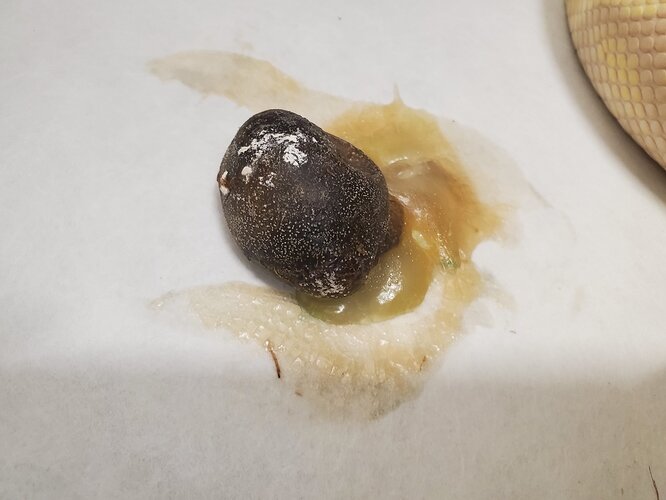 That looks and sounds like a vet visit should be done. It doesn’t look like an egg but it definitely doesn’t look normal.

To me that looks like a really old egg that went bad.
I’d advise a trip to the vets.

Do you know when she last laid eggs?

It is a strange blob the thing is with old eggs that would be stuck is that they would often cause the animal to go septic (which is why it is recommended to act fast when you suspect that an egg is still remaining in a female after laying),Now that being said there as been documented cases of eggs stuck passing months after other eggs were deposited so anything is possible.

Hopefully you put this in a zip lop bag and put it in your fridge so you can take it to the vet. Did you by chance try to cut it open, I know it sounds gross but I know I would have done it of curiosity to see what it look like inside.

I didn’t fridge it… didn’t think about that… just gathered the reptizorb up and threw it in the trash. The trash is still accessible though and I could dig it out.

We have a highly regarded reptile vet an hour away (Dr. John Rossi, wrote some books on snake care), they open up tomorrow. I’ll get her in asap. I’ll let you guys know what he thinks and how it goes. Thanks for the info!

Got in with Dr. Rossi today. Definite RI. He thinks the object was a retained slug and likely that dealing with that, shipping, and new environment helped bring on the RI. Did an initial dose of Amakacin and have 5 more to do every 3 days. Fingers crossed she gets better! Hopefully I caught it early enough.

You need to have a culture done if you want to be certain you are treating the RI with the correct meds (the RI could be bacterial or fungal, possibly even viral). There is a chance that general meds may work, but there is also a chance it won’t. Then you have to wait at least 10 days for the meds to get out of her system before testing her. Then it can take up to 2 weeks for the test results. By then your snake could already be too bad off to have a good chance of surviving. I recommend getting the culture done if you don’t see improvement in 2 weeks.