I’m looking to get a couple of females to raise up for future breeding however I’m undecided on which genetics to get.
I’m looking for something that’ll age well rather than being an amazing hatchling and being a dull adult and I’ve found that
Ultramel, desert ghost, toffee/candy/lavender all seem to match that however being recessive it’ll be harder to find good combos for a decent price
I’ve also looked into some co doms but can’t find ones that do age really well
Has anyone got any examples of some genes that last well into adulthood?

Add fire into anything and it makes it age better usually. Banana is another gene that keeps good color into adulthood. Mojave is pretty nice, so is GHI. Axanthic usually keeps pretty good color, especially if you add other things to it.

I have a Pastel Butter Fire Enchi that has held onto his colors very well.
nm 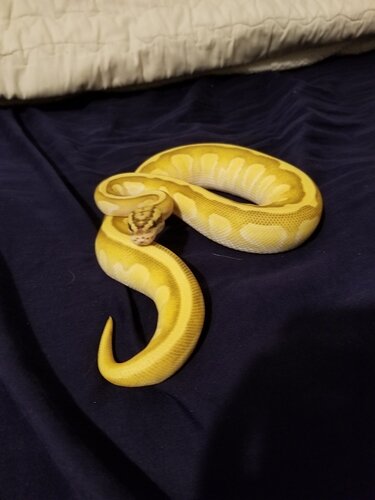 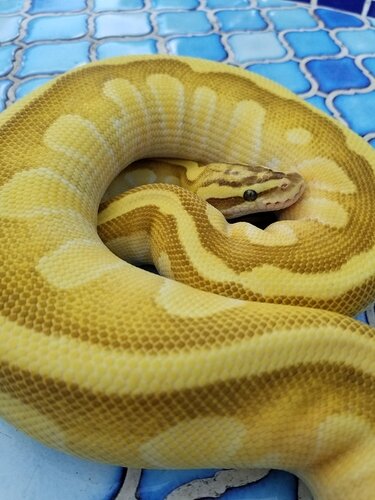 I don’t know if vanilla is another version of fire, but I know sulfur does the same thing as fire.

I didn’t mean that Vanilla was another version of Fire, just that it was kinda like Fire in that it enhances the colors of the snake. I just edited my post to better reflect what I meant, sorry for the confusion!

Leopards also look great as adults. They keep their bold patterns. HGW, spider, spotnose and pinstripe all look good as adults too. In addition to the other recessives you are interested in, hypos look great into adulthood.

I don’t know if vanilla is another version of fire

didn’t mean that Vanilla was another version of Fire

Genetically speaking, being that they are alleles, Vanilla and Fire (and Sulfur and Disco and Lemonback and…) are all different versions of the same gene.
.

A word of warning I will offer if you go with either/both of these; I strongly advise you choose the less “extreme” alleles in each group (Disco or Vanilla in the Fire-complex, Asphalt, Gravel, or Specter in the YB-complex) because nothing would suck more than breeding Enchi Fire OD YB x Enchi Fire OD Pastel and ending up with white snakes and not knowing what morphs they might be carrying.
.

For recessives - DesertGhost, Albino/Candy, and Lav are probably your best bets. Recessive projects do tend to take longer to work but they can be quite rewarding in the end. My advise if you take this path would be to pick up combo het females now and, in a couple year, find a visual male. That way you are not making a bunch of possible hets when you start breeding and you can take male visual combos you make in one clutch and put them over the different het females to make more complex combos down the line

Alleles are not different versions of the same gene. They are different genes at the same locus.

With all due respect west, I hold a Ph.D. in genetics so I think I know what an allele is
.

Thanks for the information. Learn something new every day!

There is a reason why recessive combos are more expensive: they hold their value better and longer which in the long run means it is a better investment as well if you decide to breed…some food for the thoughts here.

To add to what Deb said.

Recessives are so expensive because of the time and planning it takes to get them as visuals.

With “co-doms” you can throw 2 animals together and get a “new morph”.

You then have to raise 2 of them (if your lucky enough to get a male AND female) to breeding weight and then breed them together for only a 6% chance at a Dreamsicle (Lavender Albino Piebald).

If they miss that 6% they then have to grow 2 of the piebald het lavs and vice versa to breeding weight to have better odds at a Dreamsicle.

Recessives take dedication and a dream but pay for themselves, “co-doms” are quick and easy but cheaper by a distance.

A lot of good ideas in this thread. I like having both kinds of projects going for recessive vs inc-dom. And I choose the inc-dom genes mostly for how they can play into the long term recessive projects I am working on, while still hopefully producing something cool on their own.

If you do go ahead with committing to a recessive project, I did something similar but opposite to what @t_h_wyman suggested, and I haven’t regretted the path I’ve taken. I bought a visual recessive female hatchling, and then 2 years later bought a het male with some cool inc-dom genes added on. Then on year 3 they were both ready to breed and I got a clutch with visuals and guaranteed 100% hets. And I get to hold back some really amazing animals for the next few years of breeding!

Oh yeah, and just to plug another inc-dom gene that I think is awesome into adulthood and is one of my main focus. I love it more and more every year: Blackhead.

@crypticoils-pythons @t_h_wyman I like the logic of flipping the equation as well. Investing a little more in visual females up front and starting with a het male is a more efficient way to go. You can hold back your nicest visual male and he will be ready to go back to mom and your other females the next year most likely. Cuts out 2 years of waiting on visual female holdbacks and speeds your long term project up. Sure you might not get that 3-4 gene visual male you’re looking for long term the first year but you will still have 100% hets to sell if nothing else, and chances are sooner or later you’ll hit that perfect powerhouse visual male you want.

Plus you can get back a lot of that extra money you put into getting 1-2 gene visual females when your multi gene powerhouse male is half the price of a visual with the same kicker genes. I think you still spend “more” but…man it’s closer than you would think. A really nice 3-5 gene visual male is usually very pricey. They’re so important to a recessive project.

I have het females for my pied project because I didn’t think that through when I first started…I will be getting visual females for my clown project and a het male for sure.

@crypticoils-pythons is that basically how it worked out for you?

I like the logic of flipping the equation as well. Investing a little more in visual females up front and starting with a het male is a more efficient way to go. You can hold back your nicest visual male and he will be ready to go back to mom and your other females the next year most likely. Cuts out 2 years of waiting on visual female holdbacks and speeds your long term project up.

Eh… Six of one, half-dozen of the other.

For the same money as a visual DG female I could instead pick up: Enchi het DG, Pastel het DG, and YB het DG females. Wait two years to buy a visual DG male to put on them then my first year of breeding I have potential for DG Enchi, DG Pastel, and DG YB. Then I can cross around: Enchi het DG x DG Pastel, Pastel het DG x DG YB, and YB het DG x DG Enchi. Now I have DG Enchi Pastel, DG Pastel YB, and DG Enchi YB. Shuffle again the next breeding round. DG Enchi Pastel YB, DG SuperPastel YB, and DG SuperEnchi YB… Plus, any female visuals you held back from the first breeding can now be folded in

Also factor in that in that two year gap while you are growing up the het females the cost on visual males is going to come down giving you the ability to pick up a visual combo male for a more reasonable price which now compounds the possible combos you can make while shuffling things.

@t_h_wyman That’s true and I agree both are sound strategies and are viable, but if you’re looking at getting to that second breeding season I can already be producing all visual combos while you will have 2 more years to wait on your first season visual female holdbacks to grow up, no?

Also definitely heard your point on the money up front with the visual male cost coming down in your first 2 years but I think that could depend on what recessive you are working with as well. Something that’s cutting edge and “newer/trendy” yes you would expect the market on your male to come down quite a bit over the next couple years. If you are working with a recessive that is a little older however where the market is already settled I don’t know that it would change nearly as much.

I think your way (visual male het females) is a little more cost effective (maybe significantly depending on the gene) to get from startup to breeding season #1…but breeding season 2-4 someone that started with a het male and visual females and held back a visual male from year 1 should have a significant edge, no?

After breeding season 4 and onwards I think both can set you up for hitting those long term goals.

@t_h_wyman so I agree both are viable…if we are nitpicking and trying to pick the absolute optimal start…hmmmmm. I suppose it comes down to a few factors but mainly your cost from startup to breeding season 1.

I have to write down some complete scenarios to confirm. I feel like with a fairly settled market like pied/hypo/clown I favor my strat…with a higher end/cutting edge project where the visual males are still in the stratosphere I…feel like your way might be better?

I do think it’s close. I think anyone who plans and sticks to one of these methods is on a good path to sustained success with a recessive project.

Yeah, definitely six/half-dozen. Wasn’t meaning to imply one was better than the other in all cases, just throwing it out for consideration.

I think for me it made sense because I was wanting to put spotnose into my clown projects, and the prices for even spotnose het clowns was too much for me to justify since I was just starting out. I figured a visual female with some staple genes wouldn’t drop a ton in price comparatively in 2-3 years, but that in 2-3 years enough people would have produced spotnose het clowns that I might be able to afford one at that time. I think it worked out well for my situation.

And IKR cryptic I look for a spotnose clown/ het to slip through the cracks at least once a week. Depending how the first half of the year goes for me at work I might have to go het spotnose with my other visual clown females and pray to the odds gods

Well, I do hope your odds turn out better than mine. I had a clutch with 7 eggs and only one inherited spotnose. Luckily it landed on a snake with all the rest of the genes in the pairing though. Maybe it all works out though so I’m not tempted to hold too many back lol. My spotnose het is back in the breeding rotation again this year anyways, so I get to roll the dice again with a different female.