Snake mites and how to spot them

Bright side: i checked this fella before i left on the road and he was good, so the infestation is recently spreading. Fury so far was the worst off, but he was one of the first i had, do im a little confused if he was ground 0. Perhaps his enclosure was more suited for the mites propagation.

Since he is small, i am using a 80-90 degree bath first before i use poison so he can hydrate, then im going to use the poison for 30 minutes and wipe it off. 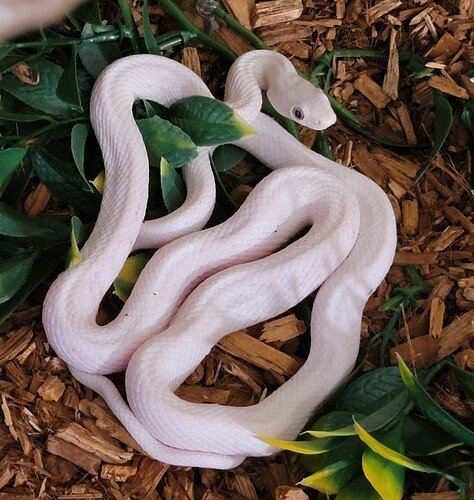 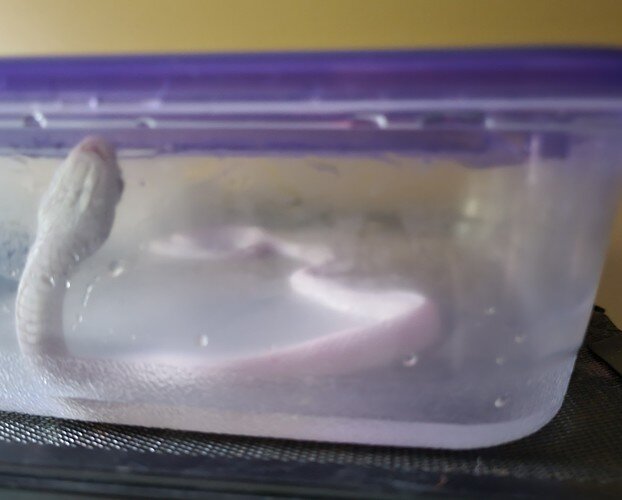 Nothing is “safe”. Do not think “there is no way”. There is. Purify it all. 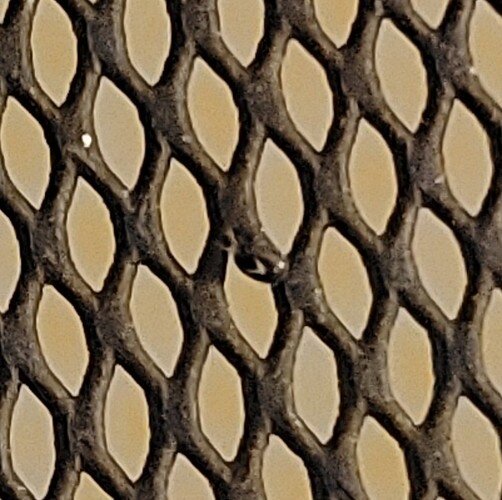 Good advice, this is likely the number 1 reason why mite treatments fail. It can take as little as 1 mite for them to come back.

… had to put him back into his enclosure.

Edit: quick clarification. I meant i had to move him from his temp tuberware back to his enclosure. Not that he bit me so much i put him back down. His bites barely hurt even as a 2 and a half footer. 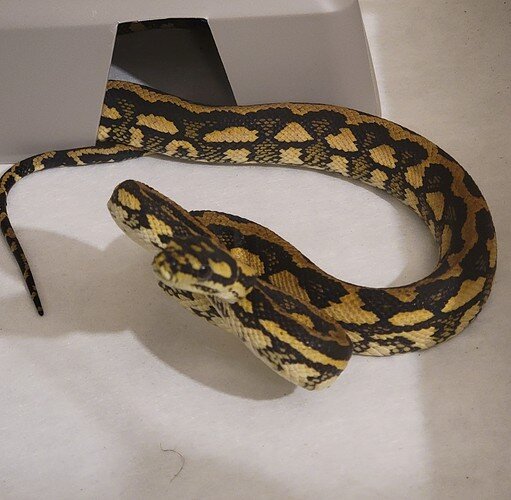 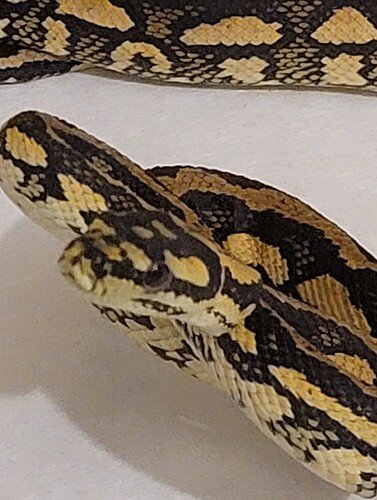 So, Furys enclosure was definitely the worst hit so far. He still has a bunch on his head, but the ones on his body where i applied the poison are dead or fleeing. This tank was 100% santized last night. The other tanks ive done so far have a mite or two wandering this morning, but Fury just had an army. Time to sanatize his enclosure again. I need to vastly reduce their numbers so it doesnt go out of control while im gone. Last 2 pictures are just more evidence of the mites spread. Trust nothing, treat everything.

A quick note, this is why a plain white replacement substrate was recommended. Its easy to change out, inexpensive, and lets you see the mites. The survivors of the poison may have gone and laid eggs in clean substrate, or a porous hide. Keep everything extremely basic. I will also be changing out his water just in case any poison got into it. 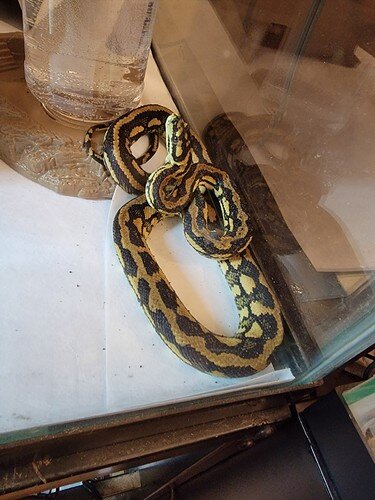 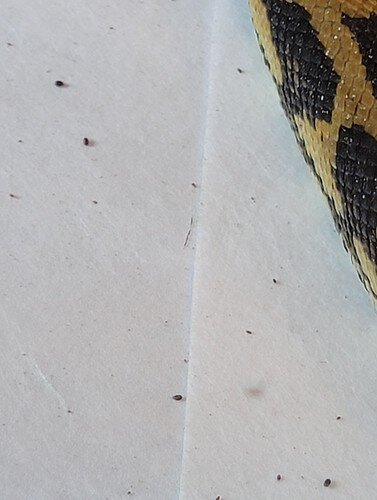 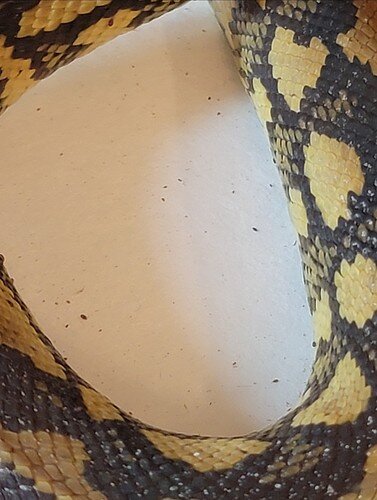 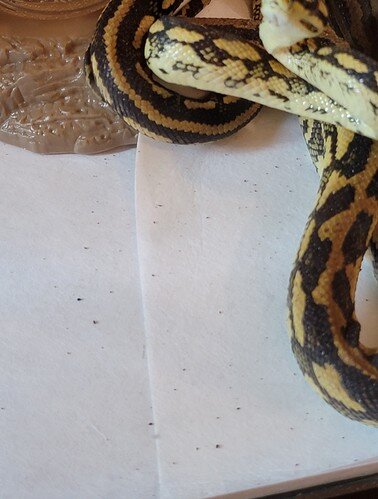 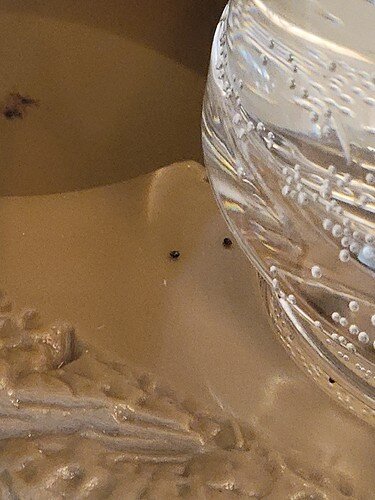 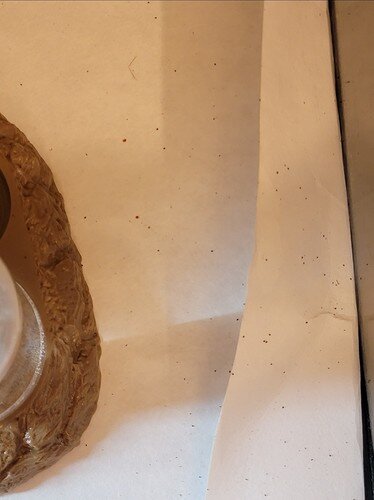 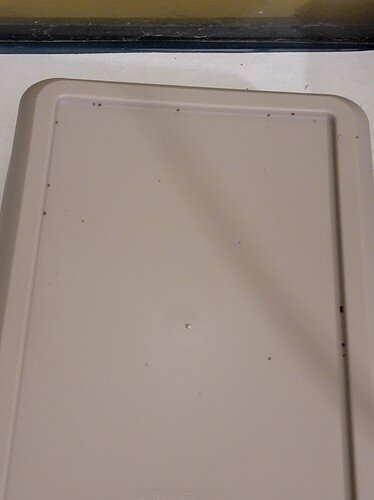 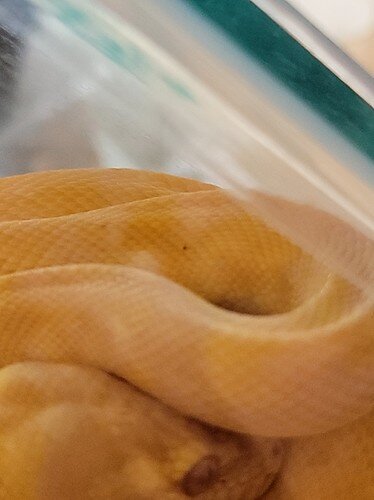 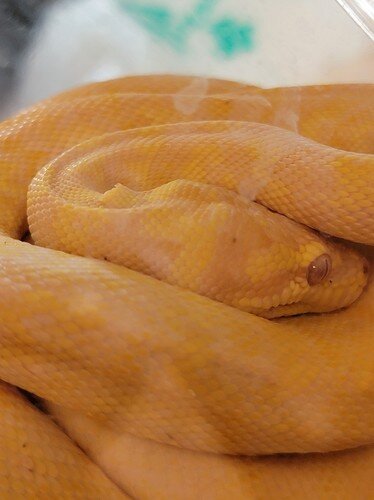 So, a note of interest. The tanks with cypress mulch, i have found mites in all the ones ive cleaned so far on the snakes. My temp tubs are set up with a mix of eco earth, spag moss, and cypress mulch. I have just opened the first one, and much to my surprise, apparently some of the springtails i had living in my iso tub have migrated to the one i just opened. Thats not a huge surprise though. Snake mites will travel to other tanks, so it makes sense so too would other types. The surprising bit is what i havent found in the tub yet. Snake mites. I am giving it a thorough look through as well as inspecting the snake to be sure.

It makes me wonder, are the rumors about springtails eating snake mite eggs true? Or have the snake mites simply not reached the temp tubs yet. Since i cannot do a full purge before i need to go on the road im gonna do a little experiment with this. The bioactive substrate SHOULD be the perfect environment for snake mites. So theoretically, i should find them in there or on the snake when i return.

Obviously if i dont, it isnt conclusive of anything, as again, its possible the infestation never reached. But would still be some interesting info. Anybody ever get snake mites with a bioactive setup before?

It will have to do with how high the springtail population is, but it could work. There are also predatory mites which I think would be perfect.

My concern with the predatory mites is they are indiscriminate. When i want to switch to bioactive, i dont want them going after my springtails and isopods. I just wish my colony were large enough to do a fullscale experiment, but it would definitely die out if i soread it accross 29 enclosures. Especially since some are now treated. Asking around for those that have bioactive on other communities as well. So far, the results seem positive, and it is understood that springtails do infact eat small insect eggs. Definitely makes me restless to get the bioactive setup going, but i need to end the infestation first for sure.

If i said fluff it, and it didnt work, im out far more resources, ans have to start the fight all over.

3 for 3 bioactive compatible setups had migratory spring tails, none of the snakes in the enclosures showed signs of mites. Plastic decorations had no mites. There were however, mites on the lids to the tubs. So the mites definitely reached the tubs, but dont appear to be active within. A few of the tubs were not set up bioactive compatible, but had cypress instead. These tubs had mites living on the snakes and plastic hides.

I should have wave 1 done before i leave tuesday though… 4 of 4 bio setups with springtails and no mites. Will see if any of them show any different when i return.

i assume it is a good idea to give the snakes water to drink once a day while not leaving the waterdish in with them?

Eh… Unless you are dealing with something like a white-lip or a rainbow boa that absolutely NEEDS water all the time, I would just leave the bowl out for that few days. The snakes are okay without for a couple three days
.
.
.

You don’t necessarily have to throw everything away. […] I would throw away any substrate however

Correct. I over simplified in that comment. Throw out anything that cannot be baked and or bleached. I will amend
.
.
.

I have not heard this. I can vouch for predatory mites however. You do not have to worry about them on springs and isopods, I inoculate all my naturalistic cages with predatory mites as an extra micro-fauna and the springs and 'pods are all thriving in those cages as well.

I dont have any current bioactive, id want to get a bioactive setup stable before using pred mites. I imagine that it will create a stable food chain with an established colony, but for one not yet stable, im unsure.

My observations were pure chance because the springtails moved into 4 of my enclosures and those 4 had clean snakes despite the mites being on the lids. There has been a few rumors about it, and talking to the bioactive FB community, its not really a problem they encounter, as well as having one of there admins experiment with it and found it did get rid of the mites, but there is no scientific study as of yet.

Cant blame the lack of a good study, not .any owners want to chance intentionally infecting their snakes just to find out it didnt work and now they have to get rid of the mites xD

I can vouch for predatory mites however. You do not have to worry about them on springs and isopods, I inoculate all my naturalistic cages with predatory mites as an extra micro-fauna and the springs and 'pods are all thriving in those cages as well.

What species of mite do you use? I might try this in my next bioactive setup. The ones that I’ve looked at kill all the microfauna.

What species of mite do you use?

I use the multi-species blend from this vendor:

I have never had an issue with them killing off the other microfauna.

TAURUS mites are supposed to be great for snakes but you can’t get them shipped to the usa. Explain how you used the predatory mites. Using racks not bioactive

TAURRUS is a brand name. The actual name is Cheyletus eruditus. The blend Wyman posted does not contain this species. It contains a mix of other predatory mites:

So at no point did he say he used TAURRUS mites. Just predatory mites, which he sourced from here:

Explain how you used the predatory mites. Using racks not bioactive

I inoculate all my naturalistic cages

Would there be a practical way to use predatory mites in bins? thank you.

From what ive read they can be used for tubs if its infected with snake mites, as they use the mites as a food source, but once the mites are gone, they will essentially cannobalize until gone. They arent sustainable without bioactive, but can still function for their intended purpose.

Back for a day before being sent back out for another week. Some snakes got a bit worse, but the worse off ones got alot better. My guess is the first wave died and now im dealing with offspring. Net count there seems to be less, but going to give a treatment to bring it back down again so hopefully there are less and less eggs.

The migrant springtail colonies have started to get much larger, and those enclosures to what i can see remain clean.