The good, the bad, and the downright scary

Alright let’s not criticized other communities, forums, or specific people especially since they do not have chance to defend themselves here, I am pretty sure you wouldn’t like it if it was done to you so please keep that in mind before posting any further.

Since I have been online since 2006 I have seen a lot, bought fake hets, had to euthanize animals (because breeding is not all rosy), been schooled by people owning 1 snake for 1 month, been insulted (being a mod often make you an easy target), been threaten, etc. Ultimately I chose to focus on the positive rather than the negative such as the amazing animals I have been privileged to keep and or produce, seeing the reptile community coming together for some of it’s members in the time of need, the people that have mentored me, the people that I have mentored (paying forward), the amazing friends I have made over the years etc.

What if they are a known morph market seller and most likely a forum member, that apparently had multiple fake accounts used to spy on and eventually slander me when I had an unestablished baby house snake pass when I was in and out of the ER for two weeks.

I kid to an extent since I decided that jackassery wasn’t worth my time outside keeping a few choice screenshots of his wonderful post.

Moral of the story, don’t friend people unless you have actually done or plan to do business with them. Lots of shady folks out there in social media land.

Those are some scary stories. So far nothing to report for me. All 5 of my females are supposed to be 100% hets for something…but I won’t really know if I have a horror story on my hands for a couple years til I can prove them out.

Probably the worst thing for me was paying over $400 for my single gene pinstripe that’s suppose to be double het pied and ghost. She’s extremely small…I’ve posted about her before, my oldest snake by 6 months but smaller now even than my 2019 hatchling I bought most recently when my other 4 are 2018s.

But…I was still very new, thought I had to have her, and the guy emailed back and forth with me something like 80 times…and came down from where she was originally priced. So the jury is still out. If she does eventually start to grow faster and proves out it won’t be bad at all…I just didn’t know enough to properly value her myself and make it less of a risk. He had an explanation for her size and I have no reason to assume he was lying so I did it. We will see how it turns out.

With what I know now I probably wouldn’t have done it…but really that’s not a very harsh lesson compared to some of what you see out there.

This is not Facebook the purpose of this forum is to elevate the conversation not to start drama, and have he said she said, however if a member harasses you here please feel free to let the staff know https://community.morphmarket.com/about

My worst experience buying a snake was one of my rosy boas. I bought him from a pet owner who clearly didn’t know what they were doing. He came to me in a tank that was falling apart, had two unregulated heat sources, and was full of old poop and sheds. He had stuck shed on him too, including eyecaps that took months to get off, and he had intermittent regurgitation issues.

For awhile I got him through it by waiting a few weeks after it happened and then starting him on smaller prey, but the vet never did figure out what was wrong. He lived a few years and then one day I went to pet him and he didn’t respond.

My biggest regret is what happened to my first ball python, Betelgeuse. He died very suddenly, and for seemingly no reason. He was lively, seemed to enjoy being held, and ate like a pig. I was busy after I had fed him one week and didn’t do much in terms of checking on him, aside from making sure the temps in his enclosure were ok. About 5 days after feeding him I went to get him out to handle him and found him dead. Still have no idea why he died, but he was still a bit under a year old, so maybe there is a snake version of SIDS? I have no clue, but I miss the little guy. 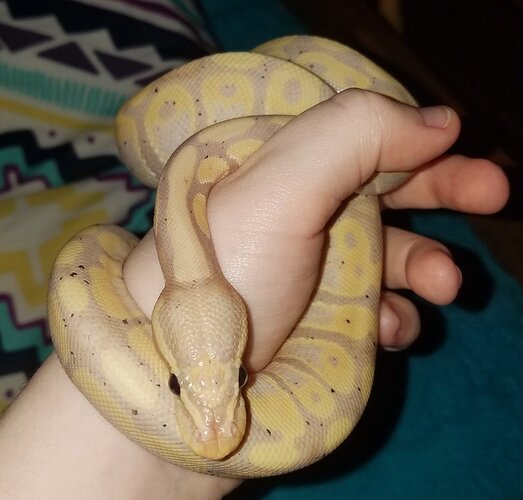 Trying to raise my own feeder rats was a mistake. I just didn’t have enough room or time to keep that many. I rehomed my breeders to pet homes and fed off what I had and I won’t raise rats again unless I have a heated shed or garage to keep them in. My spare bedroom just got too nasty. I do still keep fancy mice for pets/feeders for my smaller animals though, they’re also work but nowhere near as much as the much larger rats were.

I also have a lot of regrets about my first crested gecko. It died unexpectedly. I think it must have been husbandry related because it was just fine in its previous two homes.

Yeah bro rats are gross. I feel the same until I have a house and yard where I can build a “rat shed” I don’t want to keep them either lol.

I used to keep pet rats once upon a time, but I found out quick that having two rat buddies is a far cry from having 15 hungry babies that need to be fed and cleaned and housed until feeding day arrives lol. I wouldn’t have bothered at all except I have one female who refuses all pre killed feeders and only takes live. Otherwise I’d just order bulk frozen and be done with it.

This place is for the discussion of reptiles not breeders. There are enough places on the internet already where that can be done, here we aim to be different

Couldnt have said it better. Digging the new logo btw

I know right. You almost don’t even recognize him.

I drew it on my phone

Dude, I have had to help and correct so many of my friends who’s snakes were extremely unhealthy BECAUSE they were listening to the assholes on the forums or worse the “facebook experts” while I dont personally agree with the reproduction of the spider gene, its none of my business what choices other breeders make. Lastly, mites. Ive had them show up in my collection from time to time just because I got lazy and bought bedding at petco. They are completely unavoidable even if you are doing everything as “right” as you can. Shit just happens. Also, your mom SHOULD be arrested, that crap is just not right.

I got banned from a facebook group I think because I liked a comment that disagreed with an Admin
I only stayed on the paged because I had a saved post that had everyone’s reptile rooms
I wanted the inspiration for my reptile room, but atlas, I can no longer view it

Thank God that here everybody is still positive and trying to help each other without judgement and bashing., are open for discussion and people are entittled to have their own opinion. I only visited different forums but never joined because I didn’t like the style. This is the first group I wanted to join because of the way we attend to each other. Hope this never changes here.

Back to a downside scary very nasty snake thing. Came back home today after work a smelled something weird. Thought the dogs did something but found nothing. Tried to ventilate the house but when I closed the door after not to long the smell was back but nothing could explaine it. Now I just wanted to give some fresh water to my mojave girl before going to bed. Almost fainted when I opened the terrarium. My mojave girl strangled a rat last sunday, dragged it insite her warm hide. Left it there in the back and sat on it for two days. Had to remove a decaying rat and just finished cleaning the enclosure. It’s 2 in the night. Oh my …I’m going to be so fresh and vibrant tomorrow at work:grimacing:

@eaglereptiles I agree to nathan e, your new logo looks good!! although the other one was also not bad at all.

Animals do the grossest things sometimes.
One of my boas likes to take a stroll pretty much every time she poos, leaving a nice trail across the whole enclosure