What do you think about this ball python?

I bought this ball python as a pos het pied, but I’m skeptical about pairing him with another het pied as you can never be 100% sure until you breed them. I do think he may be though, do to him having mad het pied markers. take a look, tell me if you agree. calling all bp genetics experts. 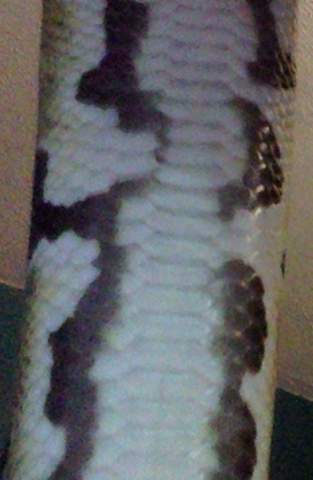 sorry about the pics being a little blurry.

I’ll tag @osbornereptiles since he has experience with identifying pieds and het pieds.

Yeah, the belly is right, but it depends on the original pairing. If I knew for sure that het pied was a possibility, such as a 100% x 100% het breeding, I’d be inclined to think this fella is het pied. Offspring from such a pairing would be 66% het pied because according to probability you would get, on average, 1 pied, 2 het pieds, and 1 normal per a 4 egg clutch, but you can’t differentiate normals from hets so that’s why we just say any normals from a het to het pairing have a 2/3rds (66%) chance of being het pied. If there is known pied in the lineage then I’d be more confident of using “markers” to lean towards a snake being het pied versus not inheriting the gene.

That said, I have snakes that are 100% het pieds with no markers, and snakes with absolutely no pied lineage what so ever with tracks. Orange dreams, for example, are notorious for creating tracks on the belly on their own (not implying your snake is orange dream). The markers are present but not super clean in your snake. I’ve also seen people hatch snakes with zero pied background in the lineage and sell those offspring as possible het pieds. It’s a highly dishonest practice because normals are difficult to sell. This is a case of trusting your seller.

Your next purchase should be a visual, homozygous pied. That way you have the best chance (50% per egg) of hatching out a pied and proving this fella out.

Better pics would help but it looks promising to me.

Second this.
Try taking the pic from abit further away so we can get a better idea of the location of the markings on the snake , make sure the vent is in the photo. Tough to get a non blurry photo if their wiggly. These guys are ground snakes, sometimes they panic a little hanging in the air. Especially if they are new with you and don’t trust you yet. Try laying the snake on a surface and then just rotating hom over for the pic.
What we can see looks nice so far, just tough to tell.