Who doesn’t love a good mystery?

I have a Het Pied female that I purchased from a mentor several years ago, who has produced some interesting stuff a couple years in a row. 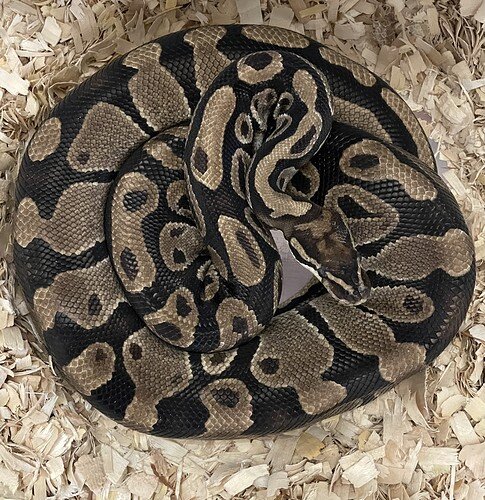 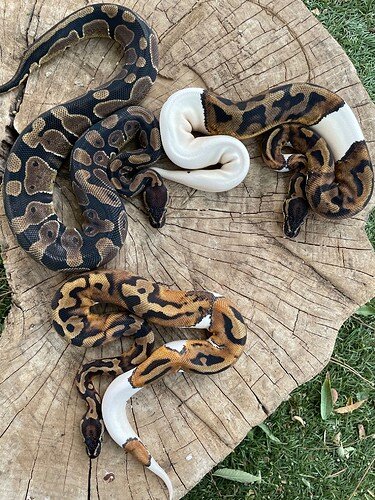 The 2020 ? Pied above after it’s first shed and a couple siblings that resembled him 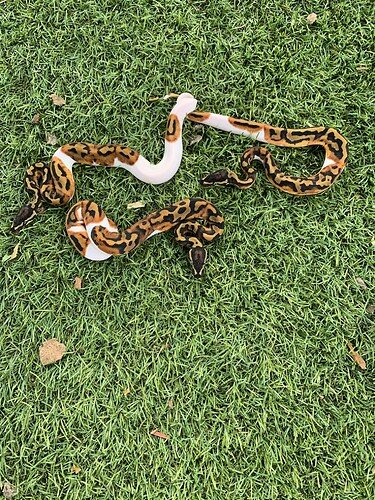 The first two to shed from this season.

Next year I’ll pair her differently and try to see it on it’s own without Het Pied in the mix.

Do you know if there were any possible het genes in the mix, or even possible co-doms like Vanilla. I would ask the breeder. Also, remember that even among siblings with no different genes at play, there can be striking differences in the patterns and coloration. Beautiful animals there.

Pied patterns can get weird even without other genes, but I’ll admit that does look strange, and neat!
You said it was the same pairing multiple times? Can we see a pic of the dad?
Nice looking babies no matter what.

Ignore the pied stuff, look at the hets and their mom.

For those of you who don’t follow me on IG, we can skip the basic “pieds and other genes vary a lot” stuff. I’m a well established breeder and produce in excess of 100 ball pythons every year. I’ve been breeding at that pace since before MM was a thing. I work extensively with fire, vanilla, ghi, and many other highly variable genes.

No vanilla, no other known hets. She came from a close friend who’s a 30 year breeder who labeled her as a cool normal when she popped out of a pied x het pied pairing. She was bred once before I got her but produced mostly pieds so he never noticed anything odd.

As far as hets, by definition, they would not be visible if it was a recessive gene.

The reason I would like to get het pied out of the mix and see this, is because like @t_h_wyman (who saw these guys first) I believe pied a low key inc-dom so is visual to a degee.

If you look at the head stamp and pattern on the mom, it’s been inherited by the one baby posted and this other one that just shed. Ignore the pied stuff if you can’t see the difference there, look at the hets. 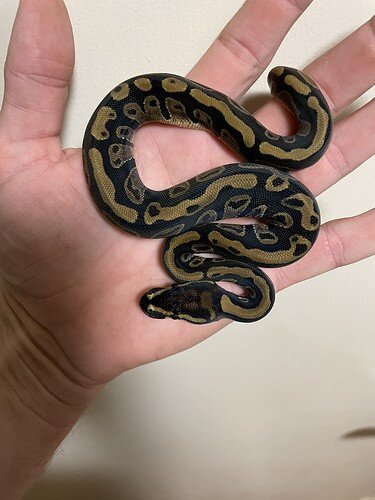 The phenotype that I’m interested in here, is the mother’s pheno which has clearly been passed on to multiple offspring. The father is irrelevant to this discussion.

One of my employees couldn’t get a truck started so I had to come to the office. Here is mr. irrelevant 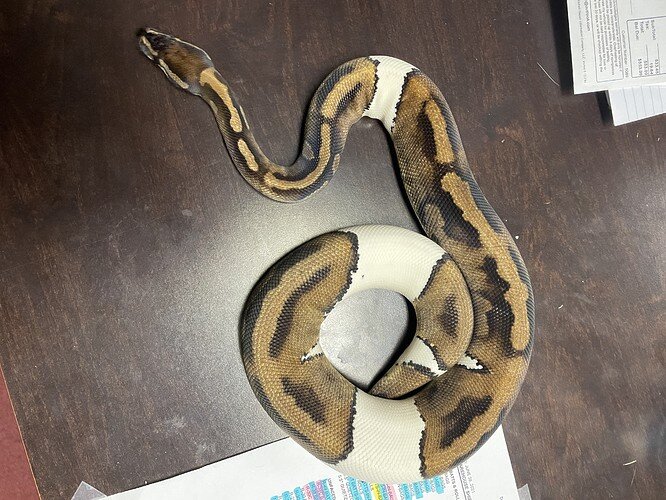 I’ll agree with you that the head stamp on the female and babies is very noticeable and looks to be inherited. The reason I asked about Vanilla is that the Pieds seem to have more pattern draping down the sides like Vanilla does when interacting with Pied, and even the head stamp on the Pied babies is quite prominent. It may not be the most economical decision, but have you considered breeding the female with something in the BLKbel complex and see if it may be in the complex? Since you have only done Pieds, you are only seeing how it interacts with Pied. 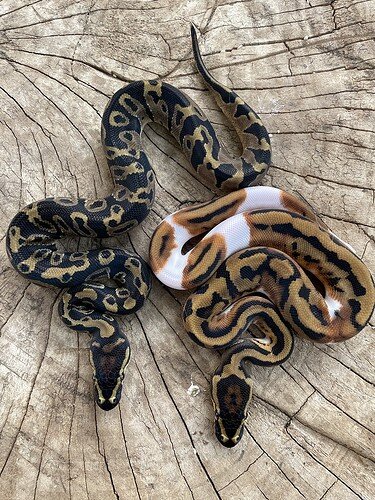 This one on the left definitely has a GHI vibe to it.

The mother has a lot of nice banding going over the dorsal. I’m interested to see what else you plan on pairing her and too and what the results are.

considered breeding the female with something in the BLKbel complex and see if it may be in the complex?

That’s not a bad idea. I can’t say I’ve any experience with BlkEL pied stuff.

The vanilla cream would definitely check the boxes on the BlkEL side and the allelic factor should keep it fairly identifiable with babies. I also like the the idea of using something out of my VPI project for possible DH factor

Nothing wrong with having a normal on hand!

Good idea to try to split out mom’s genes. See if anything shows up in the single gene form without the pied/het pied influence. Btw with you on pied being a weak inc dom so it may be flexing here abit.
The reason I asked for dad pics was maybe something subtle there, or maybe you have a hidden recessive lurking? But yeah, he looks like a straight pied to me, nice balance too.

Some of the pattern changers can be really low key, at least to my eye. I’ve seen some for sale, trick comes to mind, where I looked at it and said to myself “I’m not really seeing much here, like one little spot, maybe?” Been some low expression stuff on MM, but they may have been mislabeled too. Perhaps someone with tons of experience can chime in on some low expression stuff they produced and knew what it was even if it was subtle.

In any case, you have a nice mystery to solve, and you get to make a bunch of cool babies doing it!

The reason I would like to get het pied out of the mix and see this, is because[…] I believe pied a low key inc-dom so is visual to a degee

Yeah… The het factor is definitely contributing a degree of influence there but I agree that you look to have something else going on too.

I like the idea of trying against something else in the BlkEL complex as there are some indicators that it might be related but I would also suggest the YB complex. Also, and this may sound a little crazy, you might want to try something in the BlkPastel complex

I like the idea of trying against something else in the BlkEL complex as there are some indicators that it might be related but I would also suggest the YB complex. Also, and this may sound a little crazy, you might want to try something in the BlkPastel complex

The Vanilla Cream male is probably the best bet out of my racks although. Everything I have in the black pastel complex has 3 or 4 other genes involved.

I have a Champagne Specter female that should be ready by the time the male Het out of this clutch is ready, but that’s the only YB in my racks right now (I know, I’m slacking).

I also have that yearling pied male with the busy pattern that I’m guessing is carrying the trait to. Obviously any offspring would be het pied, but I could pair it with a lemon blast or a bumblebee or something that I’ve produced a lot from and see if something weird happens.