I have a paradox adult male sand boa who has been with us now for two years. We bought him as an adult, unknown if he’s ever been with a female, and for his first year with us he never missed a meal. Now this year he’s on a going on 2 month hunger strike. He’s only lost 5 grams in these two months so I’m not worried but it has raised a few questions.

I will say he is always exceedingly thirsty, we supply water in tub, but he also drinks a lot when we do a weekly soak. We do a soak to help with sheds since we noticed our Sands having trouble with eye caps and such. He still occasionally retains an eye cap on one eye, always the same one. We also moved him from a 10 gallon tub to a 2 gallon instead to try and curb his constant roaming attempts. 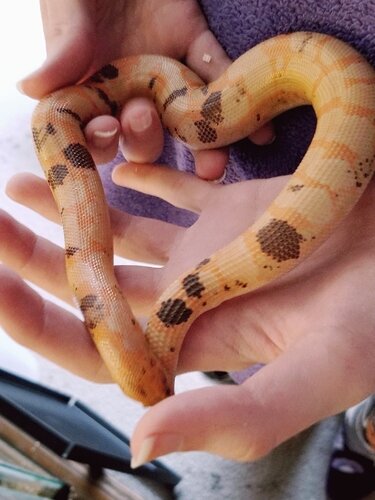 This is what he looks like body condition wise.

The issue with male Sand Boas is that they do tend to go on food strike more than female do whether females are present or not so it is really a matter of patience, from the picture he look good and this is not something I would worry about.

There are a few species where males always tend to be more finicky compare to females and KSB are one of them in my experience.

Is there anything more I can do to encourage eating? Or is this a case of me just having to wait it out? Tbh I’ve been trying to find an adult female for him just to see if putting him with one would help. Alas no one in my area has any.

You’ve done everything you could, you already downsized and I will assume your husbandry is on spot so waiting is your best bet.

Heating mat underneath set to the Temps he’s always been at, added a water bowl since hes always acting thirsty, and plenty of bedding to dig in even if all he does right now is sit on the top of it.

Thanks Stewart, never had a dude go off feed yet. But my breeding doesn’t start for any of my snakes until next year. So wasn’t expecting this.

I agree with Stewart. My females eat like pigs but my males are finicky… They either will only eat live, or go on random hunger strikes. I have a male that hasn’t eaten since February, but he’s barely lost 2 grams of weight. Just monitor the weight, offer food weekly or bi weekly, and sooner or later he’ll go off the strike.

I have a male who just ate for the first time in 2020. He my biggest male and very robust. He usually eats about 6 times a year, doesn’t lose weight and is a great breeder.