A Journey For Trust (ie. Calming a Defensive BP)

It’s been just over a month now since I took charge of Pinball, a pinstripe ball python, from my brother. I felt it would be encouraging for me to make a little thread depicting our progress in little journal like snippets. Some days it feels like we’re making progress, and other days she strikes me and it’s hard not to get discouraged.

My goal for her is to help her calm down from her permanent defensive posture and become tolerant of handling. My brother had only been handling her at his monthly feeding sessions (I have increased her feeding to weekly, as she is far from full size and I have multiple bps from him that I am working to get to an appropriate weight for their age/length/etc).

The past two times I had held her, prior to yesterday, we did rather well. She would spook at any swift movement, but she did not strike out or bite me, which had happened every time prior.

Yesterday, I opened the front of her cage and made no motion to approach her, keeping my hands towards the front of her cage, simply waiting to see how she would take my presence nearby. I noted the defensive posture of her re-curving neck and hoped that if I made no sudden motions, she would not feel the need to strike. Unfortunately, I miscalculated. She struck and got me good. I bruise a bit easily, so today the plethora of small puncture marks have a nice background of light purple. But, the good news is that after she let go, I picked her up and she calmed down relatively quickly. She began to slide through my hands and explore, her neck in a much looser posture, not retaining the tension of a pre-strike position. I held her for about ten minutes with no strikes or bites and then returned her to her cage.

I try to hold her once every three days or so, making sure to give her a break if she is in pre-shed. My desire is to help her see that being handled is nothing to fear and build her confidence, not to make her a better ‘pet’. I have put her in a tub enclosure I made, which has opaque walls and back, to help lower her stimulus and hopefully decrease her stress.

So, what techniques have any of you used for defensive or frightened ball pythons? Do you have success stories or did you strike out? Insert people groaning at that terrible pun I’d love for this to be an encouragement for people who have a defensive or unsociable snake, and I’m excited to see how she does as time passes. 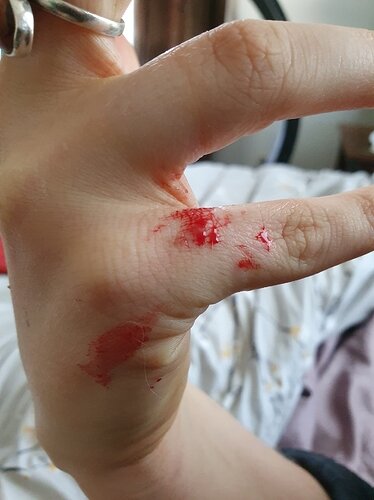 Her bites don’t hurt, they just tend to bleed a bit.

Look how gorgeous she is! She is healthy and eats well, so I feel fairly confident that this behavioural issue comes from how little my brother handled her, rather than any health issue. 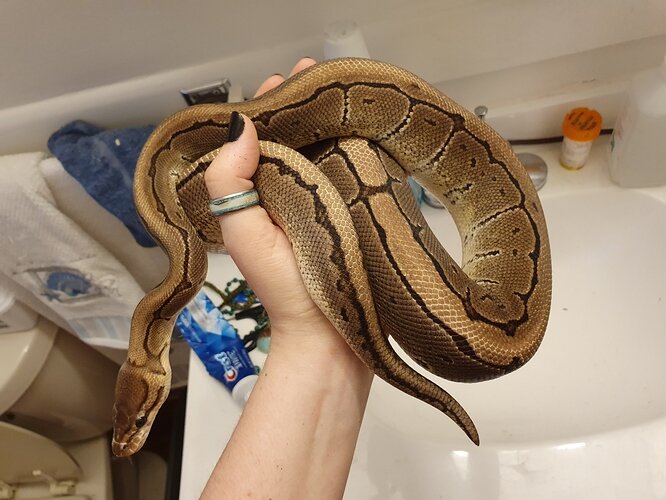 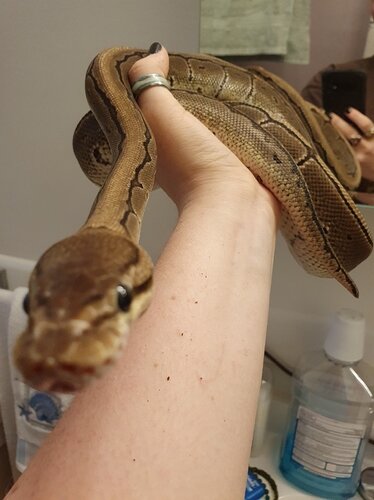 I really like this post and would be a good first read for new ball python owners so they can understand that it takes time as well as trial and error to socialize a ball python. I would also think it’d be great if you continued to update us as you further progress in socializing your bp’s. In terms of what works best for me I always try to make it a point to scoop up my snakes as to not scare them from picking them up from up above and also not restrict them in any way. Also, if a snake happens to bite during handling I will try not to react negatively i.e. not flinching, jerking away, or putting the snake back in the tub or enclosure. I think that if the snake realizes that all of its defensive tactics do not work it will eventually just give up and eventually be cool with handling. These are all just my personal techniques and i’m sure other users have better or different ways of socializing their bp’s.

Over the years I’ve been bitten by plenty of animals, and I have to say, hands down the worst was my brother’s Pacman frog. That bite hurt and the bugger hated letting go. But I digress…

I definitely plan to document our journey. She’s a lovely girl besides being fearful and defensive. Part of why I want to talk about this is to potentially help break the stigma of ‘aggressive’ animals. In my experience (with a wide variety of animals over the years) it is a defensive instinct that causes an animal to lash out, not some malign aggression. One of my brother’s other ball pythons was given to him by a cousin who had been bitten once and became afraid to handle the snake. It breaks my heart when people become fearful of any animal and abandon it. 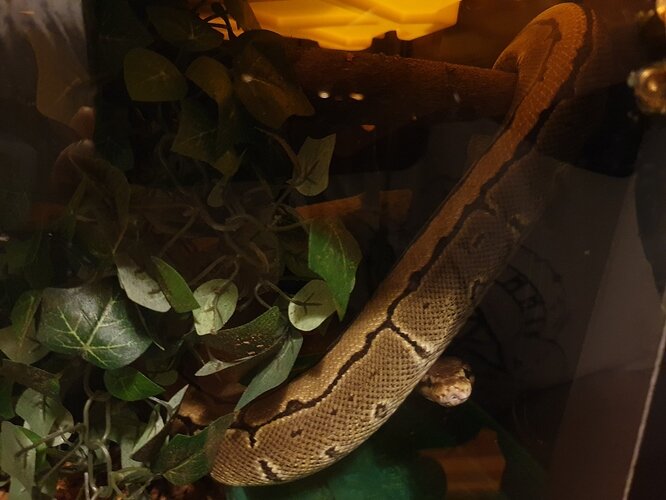 Besides, look how adorable she is, using the branches I installed in her tub! She deserves so much love!

Earning the trust of an animal is a very rewarding process to me, and I hope it will prove to be enjoyable for others to see how she does. 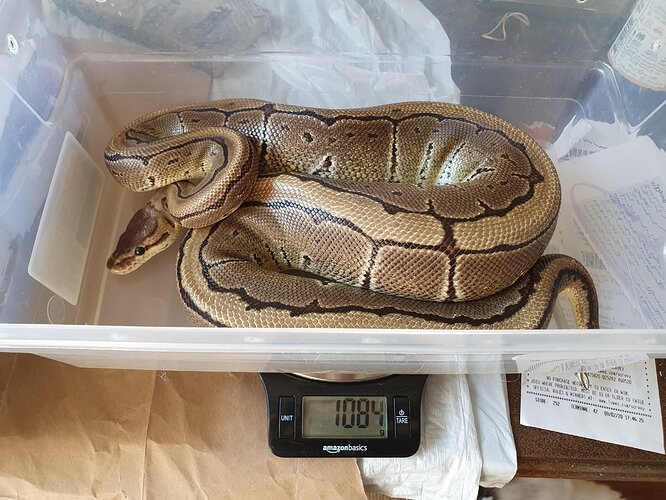 Pinball has been doing well. I held her today for another long session, which usually starts with letting her sit inside my shirt until she feels adventurous enough to find her way out. She saw both the cats, and while I made sure they couldn’t get too close, she didn’t get worried over them. I am very glad to report that even though she did get spooked twice while I was walking around with her, her first reaction wasn’t to get defensive or strike out, but just to give a light hiss and coil tighter around my shoulders.

I think we have a bit further to go so she isn’t so jumpy, but we’ll see how we do. I’m not sure if her personality is such that she’ll always be a bit skittish, or with more handling and time she’ll calm down further. Either way, she’s making GREAT strides.

She’s also eating like a champ and is up about 150 grams since I first took her on back in late July. I’m so proud of her! She’s come such a long way from biting me every time I tried to handle her.

My best advice is to learn how to not give the snake a chance to bite you. Practically for ball pythons that means never getting your hand in front of their face while they might be in a standoff defense mode. They can’t strike backwards from where they’ve positioned themselves. So for picking them up when they look tense and defensive, create a distraction if needed to get them defending from one way, then move your hand slowly over their head from behind. Most of the time this will get their brain switched off of “fight” mode and into “flight” mode.

If they choose to go into a “ball-up” kind of running away, you can keep your hand on them (or like you’ve been doing with your shirt) to give them a feeling like they are securely hidden under something instead of completely exposed. If they go into a “run like hell and find a hole” kind of run away, I usually just let them go from hand to hand until they get a bit tired of it or 10 min or so pass. Either way, just watch if they look to switch into a more defensive mode again. Usually they don’t in my experience though once they’ve decided to run.

It sounds like you’re making good progress already, so maybe the advice isn’t really needed. But I hope that it’s somehow helpful to you in your process. I bet that over time and handling that she will calm down for you.

I appreciate the advice. Whether it helps me or not, it’s now out there for anyone who might come across this thread for help with their own defensive or skittish ball.

That is a very good point about not giving the snake a chance to strike when first picking them up. I have learned with Pinball that when she is in her cage is the most likely time for her to strike out ‘unprovoked’, although I’m sure it makes sense to her as she defends her territory. Once I touch her midsection, she usually snaps out of the defensive mindset. I’ve waited too long in the past and gotten a very nasty bite or two when I was waiting to see if she would come near the front of her enclosure or not.