So earlier in the week I was tagged, sent screen shots, and messaged on fb about this Iguana needing a home.
I thought about it and then sent an application in…
About 30 people were after her, but we were chosen.

My Oh went to collect “River” today
Well I thought she would of been more stressed. She’s golden tbh. I have moved some savage defensive Iguanas in my time to new accommodation that I couldn’t rehome with me.
She’s a Beautiful girl indeed 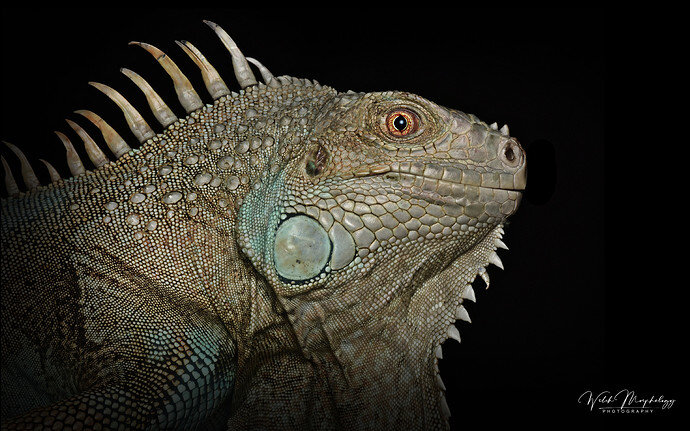 Many years back, as a young fellow, I adopted a female iguana that looked much like River. I was her keeper from 1990 until she passed in 1999, she was an incredibly dignified and well behaved green iguana. It’s like I’m looking into her brilliant eye again. I enjoy your photography and compassion for the animals equally. Thanks for all you bring to this board.

I really think it’s amazing that you work with iguanas because they’re very misunderstood in their behavior, temperament, and care.

Edited because it is a fact

WOW jeremy sounds like you had a beautiful Iguana. That would of been about the time I had my first iguana. A young juvie Green. As laid back as they come. Apart from my Albino all my guys I took on in bad shape, but young enough to put the wrongs right thankfully. Thank you so so very much for all your kind words also.

They really are. I don’t know if I have said on here but when we move…next year. What my plan is for the I. Iguana, Rhinos, Red foot Torts and Black spiny tails is to build insulated sheds for them. I plan to make them like a jungle for the I/iguanas and have it heated but also an aviary built on so in summer I can let them get more natural rays.
I have to be somewhat sensible as we are 2 female owners. I only have one male “Foforest” which I have has since a small stick thin purchase (yes I just couldn’t leave the poor guy and the shop stopped selling reptiles thankfully) He is an absolute gent. In reality I wouldnt put myself, or my wife at risk with rehoming a male in breeding season now. Although I did in the past. He wasn’t the 6ft monsters that some can be… he maxed out much smaller. I worked well with him but he would launch at my wife during breeding season. I plan to get a male Albino but usually the albinos are pretty chilled dudes. I am careful about what goes into all my animals, and their feeders too. It’s not a case of simply “feeding” them, the diets and supplements are planned. And picked, collected and chopped daily. I can’t help it of all the lizards out there, these are my fave. I’ve had them in my care since 1990. My first lived to 18 not too shabby considering captive husbandry techniques were poor then.

When I was 19 I was a bit more enthusiastic than I was careful, and there was an incidental breeding between her and another young iguana I had in my possession briefly. My first clutch of reptile eggs was from Iguana iguana, and I very nearly incubated them to term, but at the very end they failed to hatch. Even back then, in 1993, I had a mentor who knew enough to cut the eggs when they were late into their expected term, but sadly they were all stillborn. Though fully developed, something went wrong and they did not make it. It was a tragic and inspirational event that has shaped large parts of my life. It’s hard to overestimate the lack of husbandry and breeding information that existed at the time, and uplifting to see how far we have collectively come since.

I have some Welsh heritage from many generations back, and telling that story reminds me of a Welsh saying: “Benthyg dros amser byr yw popeth a geir yn y byd hwn” (yes, I had to search for that) It means, as I understand it: “Everything you have in this world is only borrowed for a moment.”

Oh bless. I have some red x red iguana eggs cooking atm. On day 64. We have indeed come a long way in terms of captive husbandry and techniques.

Oh nice. What a wonderful saying <3

Best wishes on your clutch!

thankyou. I am very EGGCITED!! I have wanted to hatch igs for years. I didn’t incubate the whole clutch