I have been researching getting an ackie/dwarf monitor and would like to know what you guys use for enclosures. Any info/pics is greatly appreciated!

I don’t have one yet but I’ve researched them a lot. Typically it’s best to use a 5x2x2 pvc enclosure for an adult ackie. Make sure the doors don’t go too low because you’re going to need to use a lot of substrate.

I’ve read 8-12" but that’s true, be sure to provide them lots of climbing branches and cover.

Males will need atleast 8-12" of substrate, and females should have an even deeper substrate. I’d go for an enclosure that’s atleast 3ft tall so the monitor will still have climbing room

I love the idea of nice deep substrate for them to dig in.

I have a young adult female that also laid her first small clutch and she put hers as deep as they would go as well. Not only under 14" of substrate, but her tunnel was almost 24" long.

It’s survival programming. Ackies are from arid regions. Incubation can be as short as 90 days, but can be as long as 115 days. The weather can change a lot in 3 or 4 months and to make sure the eggs don’t desiccate, they lay them deep, where it never dries out. 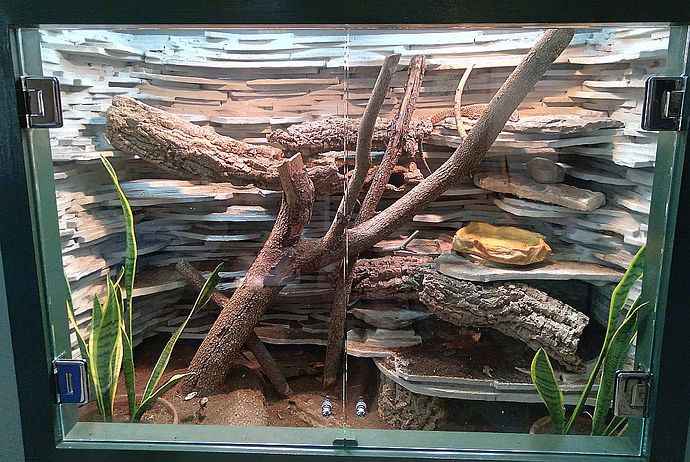 Bottom line, give them as much room as you can.

A method to get deep substrate I saw while researching is to use a galvanized steel stock tank and make a wooden enclosure to fit on top. What is your opinion on this kind of enclosure? Do you have any experience constructing something like that?

A method to get deep substrate I saw while researching is to use a galvanized steel stock tank and make a wooden enclosure to fit on top. What is your opinion on this kind of enclosure? Do you have any experience constructing something like that?

I have seen enclosures built the way you describe, but have not done any that way myself.

I think they are a good way to provide a waterproof base for an enclosure that holds a lot of substrate or a wet setup for a semi-aquatic animal like certain turtles or lizards.

My challenge would be a way to conceal it without building something around it, which would be a little redundant in a way. If using a tub, one benefit of the tub would control the substrate and thus enclosure sides would not have to be as structurally rigid.

If one has a dedicated reptile room, where the tub wouldn’t need to be part of the ‘decor’, it would be a great way to make a waterproof base for an enclosure. The portion of the enclosure you would build could be lighter, since it doesn’t have to control the substrate, and it can be shorter in height because the space you would dedicate to substrate is down below.