I have been wondering this for a while, but is there any difference between amelanism and albinism? Or are they the same thing? I would think they are the same since amelanism indicates a lack of melanin just like albinism, but maybe there is some difference that I just haven’t noticed. And if there isn’t a difference, why do we use two different terms within the reptile community?

And just to tag someone that I have a feeling will know the answer @t_h_wyman I summon you.

In the scientific world I don’t believe they are the same thing… But I think what we call a Albino in the hobby is actually a Amelanistic animal rather than a albino animal.

A true albino would lack any pigmentation and be a completely white snake with red eyes, rather than a yellow snake like a “albino” BP.

Amelanism Is a genetic loss of Tyrosinase (T)

But an albino animal isn’t one with a lack of all pigments, just melanin. A leucistic animal would be one that is all white, and I have (rarely) seen some leucistic rat snakes with pink eyes. In order for an animal to be all white, it would have to lack more than just melanin. It would have to lack the pigments that makes it have yellow and red too. And whatever other color it might have.

Albinism is the lack of all melamin.
Melanin is what produces colour.

Leucism is the lack of certain pigments.

What I’m saying is that I’m unsure that we use the terms correctly in the hobby.

As a example, this is a leucistic giraffe, not a albino 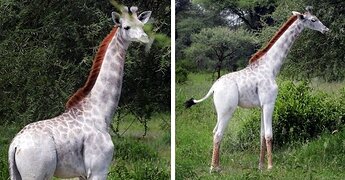 As I understand it and I could be wrong. Albino is from Latin and means “white” so has been used for Albino humans, etc. It’s usually applied to most animals that lacking melanin would be white but doesn’t really take into account multiple different pigments and the genetics involved, it’s just a white animal or human. Amelanism is a way more precise term denoting the exact pigment that is turned off. Technically, there are a ton of, say corn snake morphs, for example, that would all qualify for the term Albino but there are many different genes involved, which is why it’s not a term generally used nowadays.

While I will follow the generally used terms in different species, I do appreciate the corn snake market where a bigger push is made to be precise than some other species.

Sorry to be a bit late to the party, I do not tend to jump on here on the weekends.

@elementalexotics hit the nail on the head though. Albino/Amel are just to different ways to say the same thing. Historically Albino was used to describe the red-eyed/white phenotype that was most commonly known from mammals which only have melanin. As time (and science) progressed it became obvious that some animals have more pigments than just melanin and when you take melanin out of those animals they still have some kind of colour left over.

So it is as I was thinking. Same genes, just different terms. I will probably stick to using albino since more people know the term, and it is the one I started out using. Thanks for confirming what @elementalexotics said (and thank you elemental for chiming in too).

i didn’t know this thank you so much