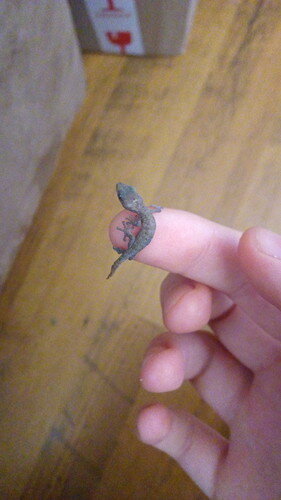 Two days ago I took in this little guy. Based on where I live and his orange/red tinted tail, I believe he’s a Cape Dwarf Gecko. Unfortunately his right back leg was broken when I found him, he can still move around but he’s unable to jump or climb surfaces properly.

At the moment he’s being kept in an empty 2L tub with a layer of paper towels and several pebbles, shells, twigs, etc. He spent most of the first day hiding under a shell, it’s become his favourite hiding spot.
Yesterday I used a syringe to add some small drops of water to some of the shells, pebbles and the sides of the tub, after a few minutes he came out to drink, he drank some more this morning as well.
He’s extremely small so I’ve tried feeding him ants, dead and alive, leaving them in the tub and holding them up to him, nothing’s worked so far. I understand the entire situation must be extremely stressful to him, so I’m assuming he’ll start eating when he’s hungry enough. Several people have recommended “bug juice”, crestie food or pinhead crickets. Crestie food is very expensive here, as much as I want to help this little guy I can’t go spending 200-300 bucks on food that he might not even eat. I have no idea where to find this bug juice people are talking about (if there are other south africans here, do you know any pet stores that sell it??). There’s a store nearby that sells pinhead crickets so that’s the next thing I’ll be trying.

I have no experience with reptiles so I’m just going off what the internet says I should be doing. This type of gecko is extremely common here so nobody keeps them as pets, there’s very little info on them and how to care for them. If anyone has any advice it would be greatly appreciated.

Do you know much about their behavior in the wild, depending on what they eat you could “make” crested gecko food by mashing up fruits that they eat in the wild and putting them in a dish in the enclosure. You could possibly also add mashed up bugs that they might eat.
Here’s an article I found on keeping them in captivity: https://www.lllreptile.com/articles/180-cape-dwarf-day-gecko/

I’ve seen plenty of them in and around the house, but they’ll run as soon as they see someone so I don’t know much about their natural habits.
I have read the article you linked, it was really helpful for setting everything up and pointing me in the right direction when it comes to food. I found a basic bug juice recipe on the internet a few minutes ago so I’ll probably try making some of that tonight and see if he eats it.
Thank you for the suggestions!

Give us an update if you can, I’m very curious! Best of luck!