Hey guys, I adopted an adult ball in highschool that was chill as can be never had a problem, died of old age. 10 years later, 4 kids grown up a little, life has finally slowed down. Thought hey I want another ball! Well he arrived today, pulled him out of sack held for about 5 min and set him in habitat to leave alone for a couple weeks like the care sheet said and he will not stop striking!!! The room can be empty and look through crack of door and he’s still striking! Not shedding, nothing around him, he’s shaking his tail back and forth, can’t even think about reaching in there! Is this normal?! What do I do?! 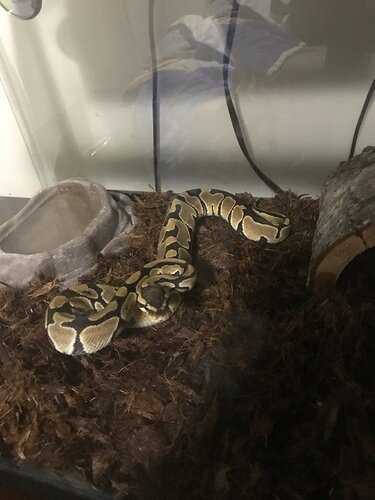 You can try covering three sides of the tank in cardboard or black construction paper. I’d guess he was probably previously kept in a rack system? Some snakes can really stress out when moved to a bigger, more open enclosure.

Got him from BHB reptiles, looks like rack systems according to his videos? Will it come out of it?

Usually in young animals it’s about

And simply because it is a young animal, young animals will be more defensive but usually outgrow this phase around 250 grams.

Thank you for your input! I hope he comes out of it!

Could also be from a lack of handling. He may not be used to being handled

Having my own handful of angry snakes I’d suggest what has already been suggested. Covering his tank more either with blacking out the sides or just filling with clutter like cork bark, hides, fake plants, ect. Should be able to go from one side of the tank to the other without being seen kinda thing. The other is handling often for short periods of time. BUT! Only handle after it’s an established eater in your care. I always wait until they have eaten 4 times for me consistently before I start handling. The more nervous you feel the more the snake is likely to feel uncomfortable in your hands. Start slowly and work your way up. And be prepared for the idea that maybe this snake isn’t gonna be one that can be handled except when needed for tank cleaning ect.

I don’t known if you picked him up or he was shipped to you. In the last one it might also be some rough handling during shipping caused stress and trauma.

Indeed covering the tank at at least three sides and putting clutter will help him feel more safe. Giving it time to adjust and wait till he is an established eater is also a good advise. Most likely if he has enough places to hide he will prefer to hide than keep on snapping at you. It’s also good to look for some strong gloves you can put on when you want to go in the tank so you can feel more secure while coming close to him. In the beginning just don’t do to much with him but just put your hands in tank for cleaning ect so he can learn your hand don’t mean danger. Then after he eats regularly and cools down a bit you can start taking him out. The gloves most likely will make you feel more safe. Don’t put him back immediately if he starts biting or curls up, keep him al little longer. He has to learn that nothing is happening to him when you hold him, also when he is not trying to bite you or curls up. If you immediately put him down when he start getting at you he will learn his behaviour works and keeps doing it. Most likely he will cool down in time.

One tip, if you start “training him” , don’t pick him up on the day he has to eat, because the stress from that can make him stop eating. And also get in his tank not picking him up, so he learns he doesn’t have to worry that everytime you come in he has to be prepared for stress. If everything doesn’t work then putting him in a smaller tub might help. I’m almost shure he will stop trying to bite you. But it might be that he will never be the snakes that likes handling, but it’s still to soon to know that now. Everything is still new so give it some time.

Thank you all for the advice! I’ve covered the sides and he has the little hide in picture and a big rock hide on other side. This morning I peaked over the lid and there he was basking on rock and struck at me within 1 second, so just let him adjust and see what happens?!

Leave him be. No peaking. No checking. Only if he needs water should you mess with him. Check your Temps also, never really heard of balls needing to “bask”. They aren’t like lizards or even some colubrids. Basking usually isn’t their thing and if he feels forced to sit out and get heat he might be more defensive.

i would check for mites as well…

Think it was the coco mulch that was making it agitated, which is why it would only lay on top of the rock. Took him out (with hook) and put him in a tank with no sides covered and paper bedding and he hasn’t struck once!

Their bites really aren’t that bad really comical tbh all this show and flare that when they finally land that bite you just go that’s it lol. If you’re that worried about being bitten distract him with one hand and come behind him and scoop him up under the belly with the other. Hold him for a few minutes, and then just put him back. Don’t handle though until he has fed for you a few times no issues. I personally love the mean ones lol they are always the best feeders. They calm down quick with some handling. It’s all just a show so you don’t “eat” him cause he is oh so dangerous