I really can’t seem to catch a break.

I made a thread last year about a male high end tangerine I had who unfortunately developed a gastrointestinal rupture and passed. I contacted the breeder sometime after and they were very nice and sympathetic. They offered me credit towards another gecko even though it was well out of the scope of their guarantee and definitely not something that could been their responsibility.

So, in January I purchased another nice tangerine from them. Due to weather I didn’t actually receive him until March 9th. Unfortunately after about the first week I was already getting a little worried as he wasn’t eating much at all, but didn’t appear to be losing weight. For the next eight weeks I offered a variety of feeders (mealworms, dubias, crickets, etc) and he wasn’t really all interested but he was definitely eating insects out of his bowl as I regularly found new droppings every other day or so. I assumed this gecko just preferred eating in private and tried to not disturb him as much as possible.

About the first week of May I scheduled a vet appointment as this gecko just wasn’t putting on any weight. They did a fecal and it came back negative for any sort of parasite, but they prescribed metronidazole just in case. He really didn’t like the metro and I don’t think he really ate anything in the week and a half of treatment. Since then I have been weighing him almost daily, where he has been hovering around 34-38 grams. At this time I ordered oxbow carnivore care and then began supplemental feeding to see if that would help. I contacted the breeder to get them in the loop and they have been responsive and supportive.

At this time despite daily feedings of carnivore care this gecko hasn’t been able to maintain a weight above 40 grams. It seems like he loses it as soon as he gains. His stool has developed a greenish color and smells really foul, which I assume is from the carnivore care and that it isn’t really agreeing with him (this started in the passed 7 days. I have been putting 3 mealworms in his dish so I can easily keep track of how much he eats on his own. He eats maybe 1-2 every 2 days or so. Over time he has definitely thinned, not emaciated looking, but his tail is thinner and can definitely see ribs and spine a bit. I can also see a lack of muscle around the head. Through all this, this gecko acts really like nothing is wrong besides not eating. He is spunky and bright eyed and readily eats the carnivore care.

At this time the breeder is unfortunately thinking organ failure, which sadly I am suspecting as well. I am setting up another appointment asap, but was just wanting to put this out there to see what other information and ideas others might have.

Have you kept record logs on him? It would be a good idea to write down weights, food offered, food refused, poops, comments, etc. What scale are you using, I’m curious about the accuracy. He might not be full grown yet which would explain the lack of weight. However the other symptoms are more worrying. What food was the breeder offering? It might be best to keep everything the same and not change much. Could you also provide a picture of the enclosure. I have no idea what the cause for this could be except stress so I want to check everything and hopefully catch the culprit.

Thank you for the response. Currently he is in a quarantine tub with two hides, water dish, food dish. His warm side is 88-89 and the rest cools to about 75. Initially I only offered mealworms for about 2 weeks (what the breeder was offering) before offering something new here or there. At this point in time I am just offering mealworms with the carnivore care. I don’t have written notes, just been relying on memory but I have relayed everything via email to the breeder so I reference those regularly. I use a kitchen gram scale that I believe is pretty accurate, I have used it many times.

When I got him he was around 5 or 6 months old, so he is definitely not a full grown gecko. Initially I definitely wanted to give him time to acclimate since I knew he was younger and not panic too much about tail weight, since he didn’t have super thick tail initially either. At this point though I am fairly sure he should be further along than he currently is. 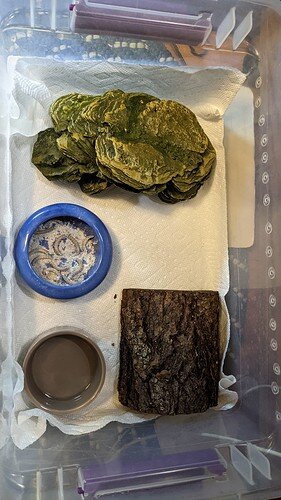 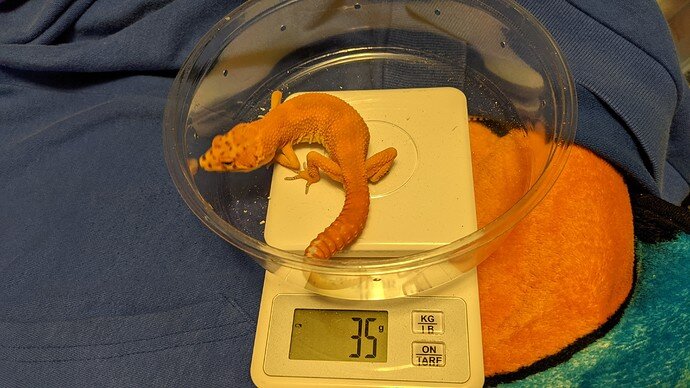 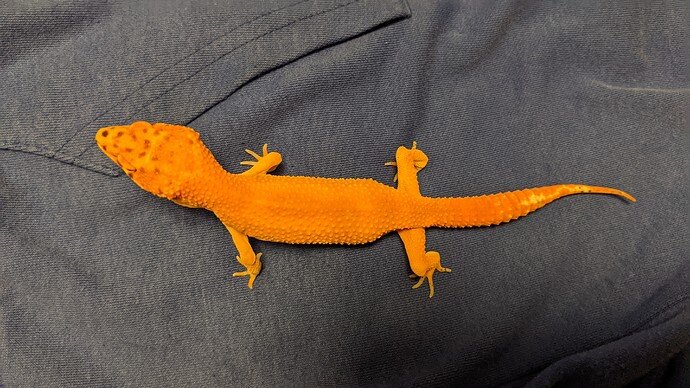 The tail size is what worries me, all of my non-mature leos have a fatter tail than that (or at least fatter by length). However there is still fat in there, it’s not close to stick-tail disease where the tail is all bone. Mealworms are high in fat but maybe he can’t digest them properly? If he’s repeatedly not eating all of the worms you could try taking the excess calcium out of the dish. I’ve found that some of my geckos don’t see a white (from the calcium) feeder on top of white (excess calcium). You could also try covering up all of the sides so less light is let in and he can’t see out. I’m also not sure if the enclosure is big enough, the hides take up a lot of space. It might be best to experiment with these things and see if anything changes.

The tub was just for quarantine and since he has not been doing well I decided to keep him in it for now. I figured doing a drastic change in habitat might not be good, but I can try a bigger tub if you think that might help. He can comfortably fit inside both hides. The room he is in has little to no activity but I can try covering it and see if that helps too.

I definitely over did the calcium in the pic, there isn’t as much in there now but I’ll try no calcium for a short bit and see if that makes a difference. He wouldn’t touch dubias before and he ate 1 cricket from tongs some weeks back, but I will try those both again.

It’s hard to find a balance on what actions to take. I don’t want to stress him too much but he obviously needs some sort of intervention.

I would keep dusting on a normal schedule (~2x per week) but would dust them separately from the dish so he can see the contrast of the insects. He could be stressed by space so what other tubs do you have, could you provide measurements? I don’t think it would be necessary to transfer him now but if nothing else works then it’s worth a try.

Okay I’ll try that schedule with calcium and to dust them separately. His current tub is about 15x10x6 inches. I can try any size you have in mind. I’m out of larger tubs at the moment but the store is a stone’s throw away.

For now the tub should be fine, hopefully he thinks of it as “cozy”. If nothing else works you could try a slightly bigger enclosure but lets try other things first.

Some pretty good news. Last night he ate 5 giant mealworms from tongs, which is pretty surprising since this guy normally goes and hides immediately and usually won’t take from tongs. He is currently at 39 grams as of last night.

Another small update, he is back up to 40g without assist feeding. I took a couple pictures and I’m thinking he looks a bit better than before. 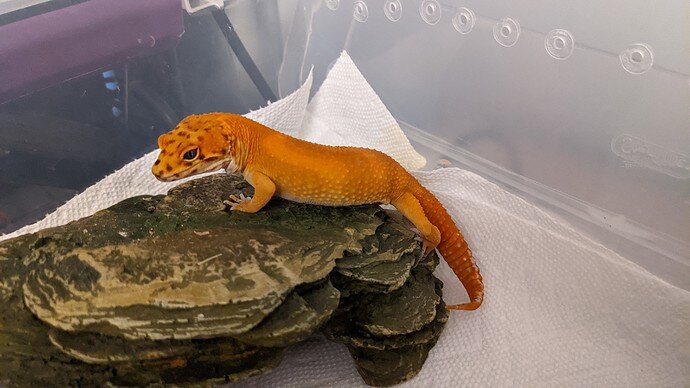 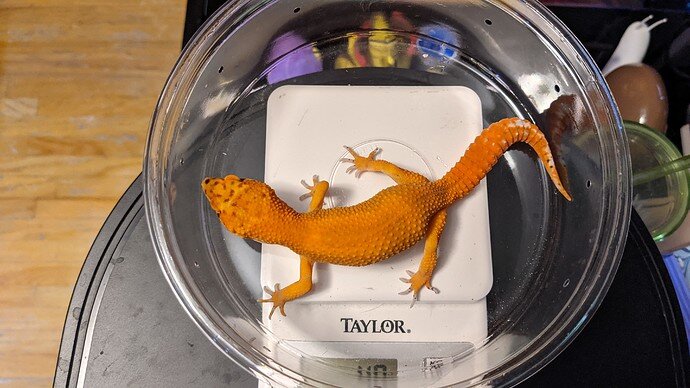 He looks much better now that he has something in his stomach. The orange is incredible

I am being cautiously optimistic! I hope this means he is getting out of woods of whatever is going on. Once he is 100% I might see him fired up sometime so I can share how orange he really gets!

It is better to be hopeful, then not to be.

My gecko seems to turn down food if I make any changes. I’m talking if I move in a new hide. If I move her enclosure to a different room. She’s my Sheldon Cooper gecko, she doesn’t like change. You can also plan on not seeing her for about a week once I’m done ruining her life.

He looks better. The tail is still small but hopefully it’s because he’s not an adult yet. However I’m not sure what that bulge is by his hips. Are they very large hips, is it fat, could he be impacted, or maybe just the position he’s in? Is it a solid mass or squishy?

I think it’s just the position he’s in. In person I don’t see a bulge. In the top photo was when he just ate the mealworms and then bottom he is arching his back somewhat.

That’s good, I wasn’t sure if there was a bulge that could be something wrong. He seems to be on the right track. I love the oranges, it’s amazing.

So this guy just achieved 50 grams! I’ve only had to assist feeding carnivore care a couple times when he started losing again, but now he is chowing down on mealworms with gusto (hopefully dubias soon but he has been very resistant to transitioning). I think we are pretty much out of the woods, so here is Bazel looking
nice and plump! 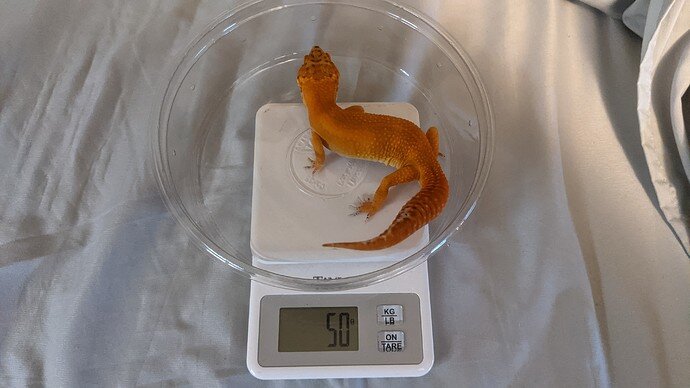 He is looking a lot better

you’ve done well caring for him, hopefully he will take dubias too

He looks great! If you need to you could try other foods like small hornworms, silkworms, and/or bsfl.