Any small and friendly arboreal snakes?

I have a 12x12x18 (can buy a 18x18x24) and I love arboreal snakes, only problem is they are either really aggressive (GTP) or to big (BCI boa) so does anybody know a snake that is small and friendly?

My GTP is not aggressive at all, he doesn’t freak out when handled and has never struck at me once 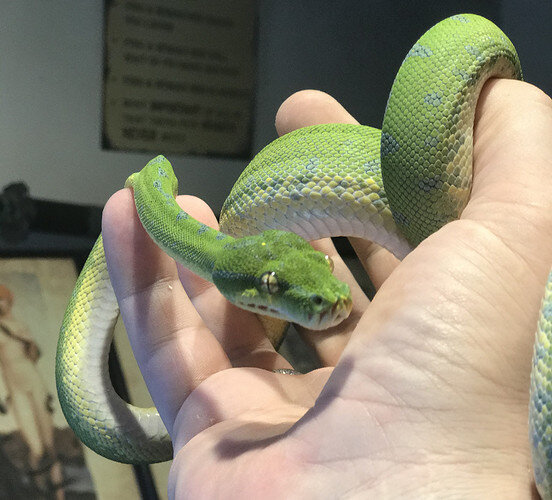 I think male Solomon Island and Indonesian Tree Boas get to only about 3-4 feet. I still wouldn’t put it in an enclosure as small as the one you have or mentioned. Plus ensure its eating mice or rats vs something else. Sorry could not be more help. 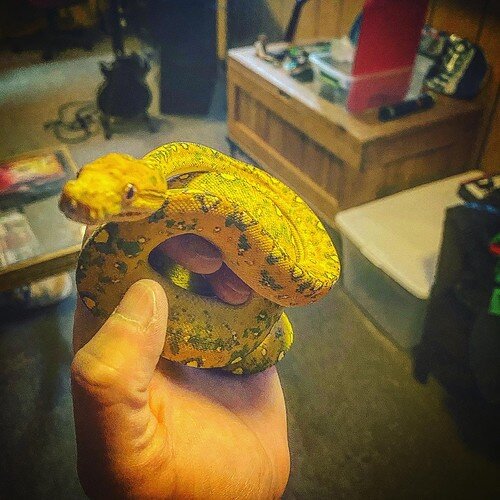 GTPs are honestly great when you work with them properly. Mine has struck at me and he bite me about 6 times in one day. After that he’s been the nicest thing ever. He got it all out of his system in one day lolol.

So GTP are not that bad as if you work with them they can be friendly?

Ok so I took a quick look but while they are very pretty and have a reputation for taming down, I’m only 14 so I don’t think I can afford a $500 snake.

Any others? I did look into rough and smooth green snakes but everything says I shouldn’t hold them as they stress really quick.

My rhino rats spend almost all their time on the branches in their enclosure, they would need a bigger space than you have as they mature though.

Rough and smooth green snakes are basically all wild caught so they stress easily. Just about everything I can think of would need an even bigger enclosure than 18"x18"x24". Most arboreal species aren’t for beginners though, as some of their requirements can be pretty strict. Like baby rainbow boas being very fragile with humidity and temps, or GTP babies not being handleable because their bones break easily. Even the adults should never have handling forced on them, and if they don’t come off of their perch you can’t make them.

What about one of the antaresia species like Spotted Pythons, Childrens’ Pythons and Stimson’s pythons? They would eventually outgrow the size of enclosure you mentioned though, but that gives you some time to get something a bit bigger.

I considered them as an alternative to ball pythons in my research and they are partly arboreal. Much easier care requirements than GTPs, Carpets, Amazon Basins etc and they’re easily found reasonably priced here on MM (Childrens have their own subcategory, the others you’ll find under “other (pythonidae)”) Based on my research they’re usually really good eaters once they’re started as well.

GTPs are so beautiful but I think it’s generally recommended to buy US captive bred individuals if possible, which is gonna be well over that $500 mark you mentioned upthread.

Is the size of enclosure due to budget or space constraints? Because I think that changes the answer a lot…

Those are nice small snakes but seems OP wants an arboreal snake. I honestly think the one’s you mentioned would be perfect for OP since they are small and friendly which is part of what he wanted. Plus since he’s 14 years old they are cheaper then some arboreals.

Any of the Atheris species could probably hold up in an enclosure that size. And i don’t think I’ve ever heard of them being unfriendly when being held…

I’m sorry I should probably add a PSA. Sarcasm does not translate well in text. Please don’t handle venomous snakes.

This is why my wife wouldn’t let me speak when we went to the foster parenting classes. Smh.

I know certain ratsnakes species can be either arboreal or semi arboreal, but the enclosurr size would need to be much bigger as they grew.

I would consider some arboreal lizards if you need to stick to a smaller enclosure!

Virtually all care guides and videos from owners I’ve seen indicate they are at least semi arboreal. Certainly a better choice than a GTP for a 14yo who is surely gonna want to handle their pet…

I’m a little confused following this thread… Were there good answers? I have an Exo Terra terrarium in the 12x12x18 size. Bought it when my son caught two anoles on his job (in Michigan) while he was stocking bananas at a Kroger. Apparently, that is not uncommon? They were terribly stressed and didn’t eat well… And I ended up w a $150 empty cage!

We have put toads in it a couple years, all released in August. One year, I had a few Chinese Mantids in it. When they laid their egg sacs, we moved the eggs out to the garden. Fun to watch them hatch in the Spring!

Now, the terrarium is sitting idol. What to do? Love to do a snake or a permanently small but decorative lizard in there. Maybe an orchid mantis or three?