The 29 snakes dumped in pillowcases in Sunderland worth hundreds of pounds, experts say.

A reptile expert estimates that the pillowcases filled with a total of 29 snakes would have been worth hundreds of pounds if they’d been sold to a happy home rather than abandoned in the street.

In a shocking incident, 13 royal pythons were found next to a bin near Farringdon Fire Station on Thursday, Feburary 13, dumped in two Buzz Lightyear themed pillowcases.

Sadly one of the pythons later died but the other 12 were recovering well at a vets in Darlington.

An RSPCA appeal was launched to find the person responsible for abandoning the snakes and leaving them from dead in such chilly conditions.

But in a shocking twist, another 16 snakes - 15 corn snakes and a carpet python - were found again in pillow cases dumped in the same bin just three days later on Saturday, February 15.

Now a snake expert has spoken out about the ‘shocking and upsetting’ incident and estimated the value of the pets.

Andrew Nickerson, managing director of Reptile Hotel in Birtley, said: “Royal Pythons tend to sell for £40 or more depending on the patterns and colours. There were some snakes with lovely patterns dumped.

“A carpet python comes from Australia and can grow up to 6ft and 10ft long – they sell from £69 plus.”

Corn snakes are cheaper to purchase but the combined worth of the reptiles found in the pillowcases is estimated to be worth more than £600.

Andrew, of South Shields, said: “These snakes are definitely not ones to be scared of.

“I think it’s really saddening to see especially with the new laws that trading standard laws that are being put in place for reptiles.

“It’s really shocking to see that this is happening to really nice animals that otherwise would have been well cared for.

“To see them dumped like that is really shocking and upsetting.

“There are lots of reptile rescue centres or people can hand snakes in to pet store’s like us. We’ve re-homed a lot of royal python’s recently with great success.

“I just hope that it doesn’t happen again.” 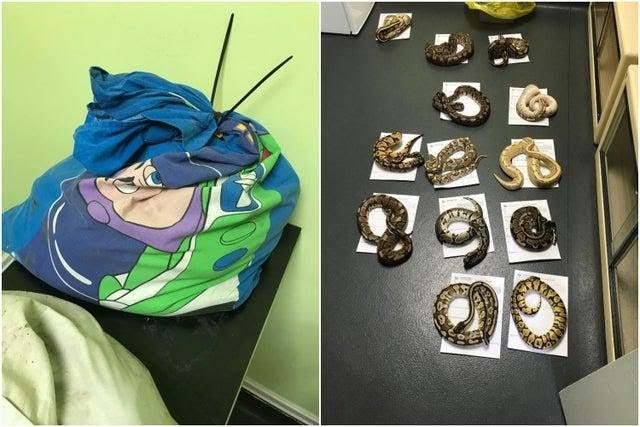 Makes you wonder if those we stolen from someone and the person couldn’t sell them so they just dumped them.

Yeah I’ve been reading about this.
Some people and I were speculating that it could be a case of revenge theft. That or, a breeder died or became otherwise seperated from the snakes, and another person dumped them.

These were quality animals and judging by the amount, possibly breeding stock. For someone just to dump them to die is pretty shocking. Even wholeselling the collection for cheap would have worked, so it doesn’t quite make sense. Another person I spoke to suggested that maybe the animals all had a contagious illness and the breeder couldn’t afford to treat it, and so dumped the animals.

I wonder if anyone knows of a breeder in that area who just did some downsizing or was talking about it? It’s quite interesting.

Really terrible to read. Mainly terrible for the snakes but also for us as reptile keepers. Hope that they catch the person and get some answers on why this was done. There is already so much prejudice about reptile keeping and there are so lawmakers already trying to restrict keeping these animals. This kind messages are really not helping us. Hope we can all reach a lott of people and show them that this is a incident and not a representative for reptile keepers in general.

Sadly while I understand that things can happen in life there is a proper way to rehome animals and this is not and it’s sad. It’s just lazy, irresponsible (and I am being nice).

It’s not something isolated either from dogs to cats to reptiles everything is now abandoned on the doorsteps of pet stores, vet clinics etc

People need to be more responsible and that includes having to rehome your animals the proper way.

I’m sorry for being very blunt but frankly this type of careless shit really pisses me off. I get that living situations can change suddenly but there are SO many other PROPER ways to rehome snakes or any animal for that matter. Why would anyone get over there heads like this and acquire this many animals? The way this person just left them outside on the doorstep of a firestation shows that this was a hasty and lazy decision on the owners part. I know for a fact that shelters would have taken these beautiful animals into their facility with open arms! I’m sorry for the rant, I just think there were so many other better ways to go about this.

We as a community need to make the wider world aware that this is a one off, and likely not by someone within the hobby. Illnesses happen, injuries happen and infections spread… But all of them can be helped (to a extent).

Working with adults, I understand that mental health has influences on impulse purchases and a reptile is a big and powerful “temporary mood enhancer”, I understand people lose touch with routine and hygiene, I understand that your own health is at risk and should be you number one priority and it’s hard splitting the good days between caring for yourself and your animal/s.

If anyone from the UK feels that they can no longer care or even no longer want their reptiles please contact me. If possible I will either personally pick them up myself and get them in good health, no question asked, no judgement passed, or have them taken to a rescue center for rehoming.

If you feel you just need a few weeks to get back on your feet or your housing situation is a bit crazy at the moment, get hold of me, I will help out as much as I can. There is no need to lose your pet permanently and definitely no reason to dump them somewhere.

If anyone would like to give a new home to any of theses animals please get in touch with the RSPCA through their website.