Our 7 month old Pinstripe girl somehow got out when I went to work. It was feeding time, she didn’t take it so I had put it away since it hadn’t been too long, and left for work. I come home to feed her, and she’s gone. She’s only 300g, in a 40g breeder with a heavy folding lid- I don’t even think she could’ve gotten out by herself, and there’s really no evidence that she left her cage. I looked everywhere inside the house and outside. It’s still winter, so I shoved a container on the floor with the rat, hide, water, and heat pad to see if that might help somehow. I’m just not sure if she’s in the house, we have holes in between the doors so she could’ve gotten through. I’m just starting to panic and any advice would help. We tore the house up-

If you have an electric blanket that might be a good thing to leave out overnight (as long as it doesn’t get scorching hot). I have heard of that working.

I would double and triple check the enclosure again (if you haven’t) just to confirm.

Personally I wouldn’t leave the rat out. Very unlikely she will come eat it and even if she did the stress of being outside her enclosure etc could cause more issues. Maybe the scent helps but unless you have seen her take them left overnight before I don’t know if it will help.

I hope you find her.

Thank you so much. She normally smells the rat for about 10-15 minutes before finally striking with a loose curl. I’m not sure what her previous owners did, we’ve only had her a month. I’ll take the rat out tomorrow morning, just to see if it would lure her. It gets freezing here so I hope she gets to the heat

Ok yeah if she normally takes it that way then maybe it’s not a bad idea to leave it out and see if it might lure her. I know this won’t stay cold all night but if you don’t have an electric blanket maybe you could throw a large comforter or blanket in the dryer and right at lights out bunch it up in the floor near furniture she might have crawled under and see if she will snuggle up in it.

One of mine got out once but only for like a half hour but still I had the panic and ik you feel awful so I’ll just say good luck I hope you get her back. If you do…fix the lid situation. Gotta have some type of latch these little guys are not the brightest bulbs of the animal kingdom but they get out of tight spaces.

About snake on loose, Helios has a history (i started taping the lid after 3rd time) and out of 3 times he escaped, 1st time i found him squished tight directly under his terrarium under heat pad itself and twice in a box full of knick-knacks and old rags. So rather than looking for a snake i advise you to look for the tightest, snuggliest and the most riddiculous places full of nonsense in 10m radius from where you keep your girl. She probably didn’t even leave the room. Look under furniture, even 1cm of space is enough for a baby to squeeze in as they can flatten themself so much it’s riddiculous. Check drawers. Check UNDER the very bottom drawer. You know what? Just take those drawers out without a question. Dirty laundry basket is a heaven. So are empty purses and sport bags crunched next to a vacuum cleaner or something. So take a deep breath and start thinking “if i was a snake, what would be the tightest and the most secure place i could crawl in?”

There are a couple of tricks you’ll hear more than one keeper talk about. They could be myths but I’ve used at least one. Here goes.

Leave the TV on. It doesn’t matter if it’s muted. The myth goes that snakes will be captivated/hypnotized by the TV and you can catch them the next morning.

Find some dominos or other small items you can leave around the floor that are easy to knock over. In the morning you can find the animal by the path of bumped over items.

I couldn’t tell you if the “TV trap” is real or not but I’ve used the second method to track down a kingsnake before.

He had taken up residence behind a shelf.

As others have already mentioned dark and warm spots are great places to look.

. So most of our snakes at one time or the other got their adventure ( last one even last week) so I have some experience on this part.

First of all, just relax, it makes it easier to think straight. Close the door of the room. If you have dogs, cats or others lock them out of the room. Get a flashlight. Then try to start thinking like a snake considering the nature of the animal. Snakes hardly even leave a room in the first hours. If it was daytime she is not in the most adventures time. Most likely she is still very close, at night they can go a little further but still not to far. I never had one leave the room. They are snakes who like warm places and are not so crazy. So she will really not go out in the cold so don’t worry about that.
Know they don’t like open spaces so in general they follow the wall or the first best tight place they see. If she is really not inside the enclosure, than check behind, on top or under the enclosure. Know she can also go up so if you have bookshelves, open cupboards with things inside, they really like them. Just check the radius of about 1, 5 meter from the enclosure.
If she is not there then go stand in from of you enclosure and try to think what route you would take if you were scared of open spaces, like tight places and like clutter and warm places. Use a flashlight to check the darker spaces like under cupboards ect. Know they are really not an adventures dare devilish species who go far in the wild so in general they stop their adventure at the first best tight spot they find. Often they don’t even get further than 1,5 meter from the enclosure. Expecially tight space is what you should be looking for. Check shoes lying around, or boxes ect. If you still didn’t find her follow the wall with the least open space. Good chance you found her by then. If she is really not in the room than go to the next room and keep the same mindset…they don’t like open space, they like tight spaces and will be looking for that one first, preferably with heath, but tight is the main goal. But still, mine never left the room. I don’t think food is on her mind. She refused earlier so she was not extremely hungry, and if she is not, she is not in a feeding mode. Ball pythons in general only eat when they feel safe and everything is perfect, or are almost dying of starvation, that’s what they are famous for. She is in a looking for safety and confort mode. Heatmat and hide can work, but only if she is lost for a longer time.

To give some examples of where I found my snakes: underneath a pillow that fell underneath the sofa. Behind the next terrarium. Between his own and the terrarium on top. In a sneaker almost at the top of a shoe rack. Squeezed between a box full of clutter and the wall. Underneath a cupboard still on the move following the wall. I sometimes let them crawl around to just see where they go. Flowerpots are favourite, next to book shelves and lego boxes. But always the first they do is to leave the open space and find a nice tight place to hide. If it is daytime in your area then really don’t worry. she will be close by, at night she will go a little further. She will pass one tight space and maybe go to the second hoping that one also has heath.

Emily from Snake Discoveries made a youtube video about escaping snakes with some tips about how to find them, also when they are lost for a longer time. You can always check her to for extra tips.

Good luck and let us know when you find her.

I used to have tanks and had my one banana get out twice, and both times he never really left the room. He went right for the bookshelf and sat on top of the books where he couldn’t be seen immediately.

I’d say look for the smallest place possible and check before you shove things around or sit down. If you have a refrigerator, I’ve seen people I’ve their snakes run under there since it’s warm.

So? Did you find her?

We finally got her! I remembered that she’s scared of heights (But, she loves to climb) so I searched the closet really closely this time in my blankets and such, and found her in with some plushies and pillows. She wasn’t too cold but as soon as she got warm, she showed feeding behavior, so maybe because she didn’t take it the first time, she was still in food mode looking for it and got out?

Good news! Happy for you I’m sure that’s a weight off your mind

Oddly enough she wasn’t in too tight of a space for once. She was in the open (well, sitting on the top of the box of pillows and such) but I appreciate the advice!

Very much so! She’s my emotional support animal that gets me through so much, so when I lost her it just sent me into a spiral. I think I’ll definitely be heading to bed now haha. Thank you so much though!

Never heard of the Tv trick- though when I hold her she’s often watching it haha, so it might work

Thanks! We got her, she was on top of some pillows and plushies (but hidden under a single one) <3 Also I love watching Emily, I’ve actually watched her escape video BEFORE I even had my first one !

Happy to hear you found her!!!

Now to try and feed her later haha. She struck at her rat but missed it, still showed food behavior but never struck at it for 20-30 minutes now, so I gave up (And so did my arms haha) and hopefully she’ll eat later

There’s been a couple of occassions that my ball has gotten out when she was younger. And it was always because she was hungry and looking for food. I would definitely try and feed her. Maybe the food item is intimidating for some reason or seems to big to her?

I’ll try her with a rat pup next week (I use them for my new boy) but otherwise she eats smalls really well. I stuck it in her hide with her, who knows if she’ll take it. She breathes hard and tongue flicks, follows it- just doesn’t strike after that time she missed earlier. Found out how she got out (small ledge on the top of the tank) 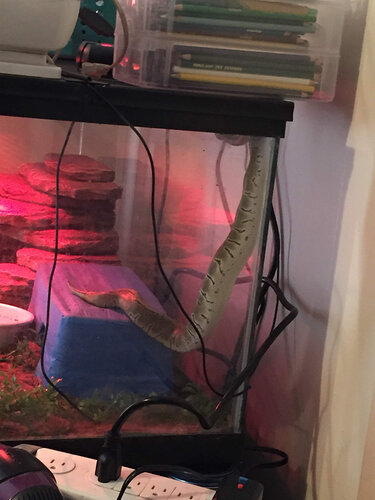