Asclepius has just about reached his first birthday (the breeder never did tell me his exact birthday, but he arrived August 25 last year after having had his first couple meals). It’s been an amazing year, watching him grow and his little personality develop. He weighed in this morning at 267 grams.

Last night while I was offering him a frozen rat hopper, I noticed that his face looked odd. As you can see from the photos, it almost appears like his upper lip is caught on teeth of the lower lip, so it doesn’t have the usual duck bill appearance. He struck at the rat multiple times last night without success and was getting visibly agitated. I picked him up and held him for a while as I fed another snake. Once he had calmed down and was no longer hissing, I put him back in his tub and left the rat for him overnight. Returning this morning, I found he had eaten his rat. Due to that, I plan to wait a day or two before probing around in his mouth to see if it might be an abscessed tooth or anything visible.

Does this look dangerous? His tank is kept in with my other snakes, the room stays between 70-75F for the ambient temperature (which I know is a little low) and his under tank heater is controlled by a thermostat which keeps it at 89F. His tub does retain more moisture than a glass aquarium style set up, so I wasn’t sure if perhaps the humidity has gotten too high. I have had balls in the past that have issues with ‘pushing’ or ‘rubbing’, but I wouldn’t think that would affect one side of his mouth, rather than the tip of his nose.

The other four ball pythons in the room, all in their own cages, don’t seem to have any similar issues, which makes me relatively sure it’s nothing contagious. I have seen some respitory infections that have caused swelling before, but I’d love a second opinion on this. Asclepius (Clepi as I call him for short) is far too good of a boy to not ensure he is healthy and happy. 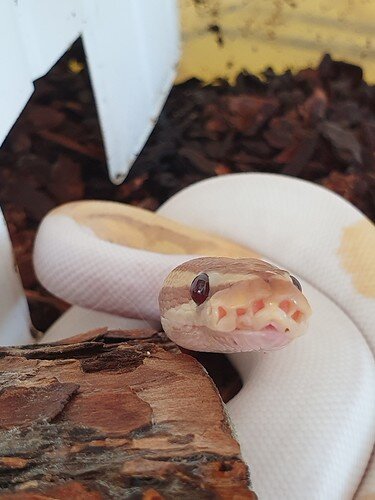 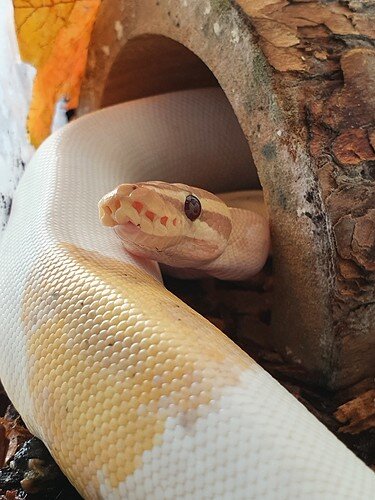 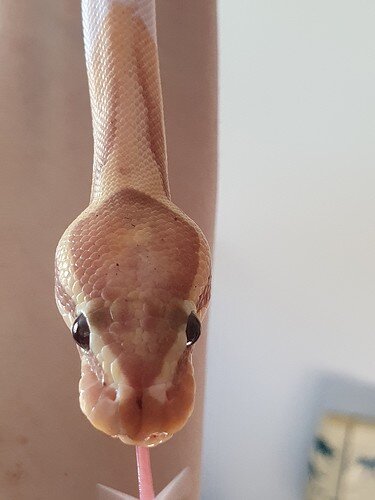 Let me know if there’s any other information I can add.

Hopefully this works, I filmed as I was inspecting Asclepius’ mouth. Once I have a second pair of hands later in the day, I’ll see if I can get clearer photos/video.

From what I can see, there’s no sign of an RI or mouth rot, thankfully. It looks to me like one fang has pierced his upper lip, possibly. Thoughts?

Ball pythons have about 100 hooked teeth making it easy to lock their prey and pull it in! I seriously never heard of a bp tooth piercing the top of its mouth it seems impossible.

A few years back I had a female that broke a piece of her jaw with two teeth attached and it did the same thing. She required surgery to take it out and antibiotics. I believe the live rat bit into her jaw when she struck. However, I could see something similar happening if the snake struck and hit the side of the tub too hard.

I have some great news!

When I checked on Asclepius today his tooth had either come out or he’d managed to get his lip off so it was no longer impaled. I had already scheduled an appointment for next week, so I’ll keep that and make sure that he’s going to heal up well.

He was very chipper and enjoyed hanging out with me for a while.

Look how cute he is! 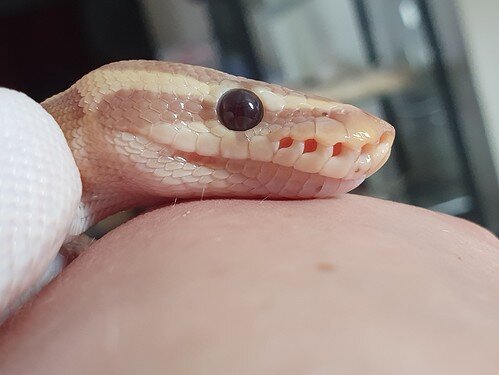 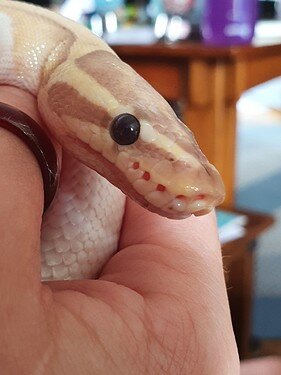 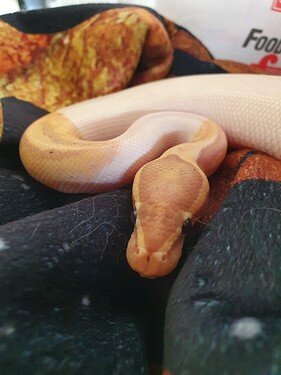 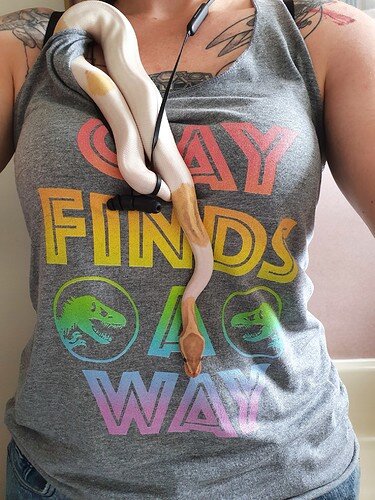