Banana and coral glow are same gene but in two different line. What is the biggest different? And if I breed a banana x coral glow I will have a super banana or super coral glow?

There is no difference, so take your pick. Banana and coral glow are interchangable so I don’t think it matters what you would call the offspring of that pairing

There are others here with more experience, but I have both and here’s my take, for what it’s worth.

Banana tends to be a brighter more yellow color as it ages and responds well to lightening color genes like pastel.

Coral glow is more creamy like a lav albino as it ages and benefits from darkening genes for contrast.

Both have some effect on pattern, both develop the spots, more or less, in the single gene form. Both are “sex linked” as far as we can tell.

Mixing the two gives you the super form, it tends to develop few if any spots. But I feel like the mixed super form is just a bit “muddied” compared to the line pure forms, but that may just be me. Most of the breeders I’ve heard discuss these genes advocate keeping the lines separated. I’ve noticed that when there are obvious lines, the community generally sides with keeping them separate, but that may just be an outgrowth of the seemingly endless desire to discover the next hot new gene or make a “world’s first.” No great crime to mix them, just not popular.

Lastly, many people don’t see any difference at all. They just list the offspring as whatever they want, banana is the better known, coral glow the more “rare.”

But even with lesser/butter many people will, while admitting they are the same gene, say they can see a difference. Do you disagree? I’m curious about your take, I know you have more experience with these than I do.

I totally disagree there is literally no difference between butter and lesser or coral glow and banana.

I have read about the coral glow and the Banana. 2 of them were shipped over and 1 went to one breeder and one to another breeder and they got 2 different names. Each breeder went their own directions with each line.
Coral Glow and Banana are the same.
When I Researched about it that is what it said.

That is correct literally the exact same shipment.

I don’t dipute the origins, I’ve heard the same story. Though I haven’t heard how the originals were or were not related. And certainly there is plenty of breeding evidence to show they are the same gene. I don’t think I’ve heard anyone suggest otherwise, I’m not.

But, having said that, and admitting that I still want to have alot more observation experience, it is possible to have noticeably different lines of the same gene when breeding any animals. I was just wondering if banana/coral glow (or lesser/butter for that matter) might be such a case. Certainly in some cases, as I already said, it’s more a matter of people putting a new name on the same old gene. (Allelic morphs thread on here comes to mind)

It might be hard to say with ball python genes, considering the extremes of variability we see expressed. But in the case where an effort has been made to separate the lines by name and breeding, maybe we could see it, if it’s there?

To my eyes, I feel like there is some difference, not alot, but some. But maybe I’m just seeing individual variance and mistaking it due to inexperience. Oh, well. I’m going to try to keep my lines separated and just keep observing. No harm in that. I’ll still label them separately, just in case anyone else cares for their breeding projects.

I get what’s being said about the differences as I’ve seen people know which is a coral glow and which is a banana. Despite being the same animal with different lines.

It does seem like one person got one that was more paler with a bit more yellow and named it ‘coral glow’. And someone got the ‘banana’ which is brighter and named it banana when you have a good look at them.

Even the calculator on here says both from the pairing, so you’d get normals, bananas, coral glows and a coral glow banana. Assuming that’s the super but with both lines together.

This is interesting too. Chris made this back in 2020. Thought I’d Share 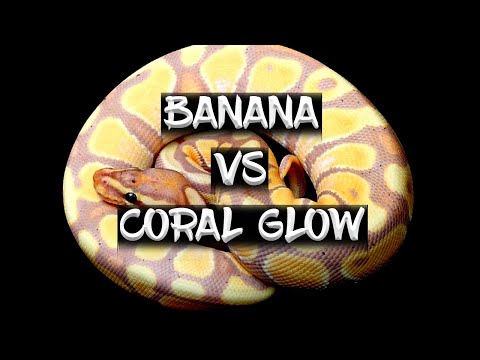 it is possible to have noticeably different lines of the same gene when breeding any animals.

Yes after considerable line breeding you will have a polygenic effect. But then the breeding has separated the lines. That’s not the case with butter and lesser and coral glow and banana these lines have been crossed so many times knowingly and unknowingly I highly doubt there are a lot of “pure” lines.

True enough, but that just suggests that if there is a difference between different lines of genes, we should be making an effort to keep them separated.

I’m reminded of how really annoyed I was the day I walked out to the pasture and found one of my Billy goats had jumped fences to get to some girls I was keeping separated. Messed up my breeding plans for a whole year and I wound up having to raise offspring for sale as food instead of papered lines.

True enough, but that just suggests that if there is a difference between different lines of genes, we should be making an effort to keep them separated.

I feel opposite if they are the same gene all we are doing is spreading misinformation that they are different. They should be called the same imo and at this point there hasn’t been a conscious effort in the hobby to keep them separate so who’s to say what is really one line and not the other. Having a 100 different lines of the same genes just muddies them waters to much imo

Yeah, I can see your point, but I’ve never said they weren’t the same gene, or others in this category for that matter, just that they behave or express a little differently.

I mean, it’s not like with the incompatible lines of axanthic, which are totally different genes, in different loci with the same effect. Just that these genes are different enough to maybe warrant trying to make them …more separate?

Does that make sense?

One of the reasons I like the index being put together on this board. It will help to set “standards” for the gene expressions and maybe help untangle some of this.

I think it’s the goat lol. I work with both coral glow and butter and have hatched both versions of each and I’m telling you there is honestly no difference. And that’s not just me saying that it is the general conscience among breeders who produce way more than I ever will. And in the reptile hobby people have used “different lines” to raise prices and sell more snakes we need less of this not more.

And in the reptile hobby people have used “different lines” to raise prices and sell more snakes we need less of this not more.

Well, that I agree about.

Until and unless you can prove out the distinct lines, it’s unethical and foolish to charge more just on the name. Unethical, because you’re cheating your customers and lying about your product. Foolish, because word gets around and two things happen, customers leave you and other unethical people start mixing up the lines to make more cash.

Then it all falls apart and if you ever do prove out something different, no one will listen or even care. Your hard work is wasted and maybe the chance at something new and amazing disappears.

In reality most new genes aren’t new at all they are repackaging of old forgotten genes and sometimes a misidentification leads to a “new”gene. There is zero reason for us to be recognizing stuff like this. If a gene is the same it’s the same. It all becomes a jumbled mess. It has been proven butter and lesser are the same as is coral glow and banana we need to be calling them the same thing.

Your hard work is wasted and maybe the chance at something new and amazing disappears.

And it’s not! If your breeding because you love it you will enjoy the fruits of your labor. And if you make something truly new and amazing it won’t matter what you call it people will want it!

Well, this has been fun, but I think Shaun and I have hijacked this as far as we should.

To answer the OP:
I and some others think there is a slight difference visually.

Shaun and many others, including experienced pros, do not.

We all agree that functionally they are exactly the same gene and can be mixed and matched without real concern.

So there you go.

Oh, and the mix would be the super, but I don’t know if the reptile hobby uses the sire or the dam for primacy of name. For clarity sake, you should probably label a mixed super as super banana, since banana seems to be the more popular name.