Hadn’t planned on breeding just yet, and not sure when they even coupled. I have been keeping my snakes a bit cool and feeding sparingly due to my hectic life & intentions to start breeding in a year or two.
Bought the pair this spring from a Craigslist intended breeder getting out of the hobby.
He had introduced them and witnessed “courtship” but not copulation (almost certainly they did, though). I don’t think he had them cohabiting, and I transported and housed them separately.
Imagine my surprise and confusion when I saw multiple viney-slithery shapes stretching upwards on the sides of the female’s translucent tub!
Recently, I had a phone meltdown (not literally) so lost passwords, contact info, photos/screenshots, and breed/morph info, and have been extremely busy of late on several fronts. I believe I obtained the pair at the beginning of April. I hadn’t peeked in on her in a few days, but the babies are less than 3 days old. The mother hadn’t acted gravid, though she had been eating infrequently (again, I had been keeping the temperatures lower and offering food less frequently than normal).

If I remember correctly, the parents are a sunglow and a hypo het albino (I’m not well-versed on boa morphs). 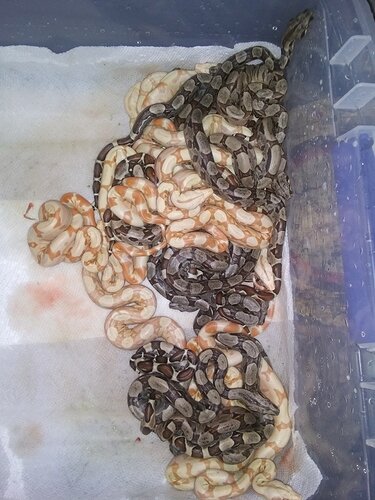 That is the kind of surprise ya gotta love!

That’s the kinda surprise that I don’t know if I’d be jumping for joy or hopping mad.
But congratulations on what looks like healthy group of babies.

Good luck getting them started

Any chance you could get a picture of three of them together under the same light? Sunglow, Hypo and Normal.