It’s not a final decision, but I’m thinking about getting into tarantulas, so I’d love some advice on what to get. I want a smaller, terrestrial tarantula that’s not a very heavy webber and preferably has some color on it.

I’ve only just started getting into Ts but Brachypelma seem to be the most commonly suggested starter species. Here is an adult Mexican Fire Leg female. She doesn’t burrow or web up the place lol. 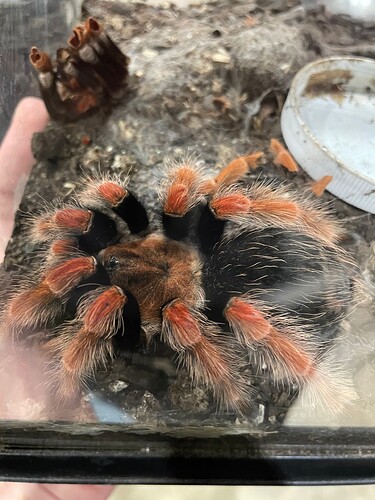 Mexican red knees are also the same in terms of care from what I have seen. The females have the added benefit of being some of the longest lived Ts. 30 years makes it so they live longer than some of the snakes I keep.

Only problem with those is they are usually very expensive as adults and grow painfully slow from slings. A rose hair is a good starter or an Arizona blonde.

Spiders are great, highly recommend giving them a shot. I kept Ts for 20 years until very recently (going through some career/location changes). They’re pretty, don’t need much space, mostly do fine at room temp, and are generally very hardy.

I agree with the above suggestions. Any of the new world terrestrial genuses mentioned above (Brachypelma, Aphonopelma, Grammastola) would be a great beginner species. They mostly stay on the surface (rather than burrowing), they’re “friendlier” than old world species, and they’re pretty.

I’m also partial to Brachypelma boehmei (fire leg), but whatever you fancy.

You have a lot of options. Brachypelma and Green Bottle Blue are some of the best starter species.