Beyond just hosting the community, the marketplace will help get its currently little sister site, this forum, going by directing some of its very significant traffic.

You will start to see in the upcoming days some subtle integrations with the MorphMarket marketplace. This week we already added half a dozen links such as from the home page and different spots like the “how to buy” guide letting users know about the community.

Now we’re working on the syndication of content from the community to the marketplace.

All of this is to alert MorphMarket’s large user base to the community, as well as to reward our community members with exposure for the quality content you are creating. We envision buyers coming to the community to get to know you breeders in a more personal way by reading about your projects and getting some of their questions answered. In doing so, MorphMarket will provide you another way to build your business. 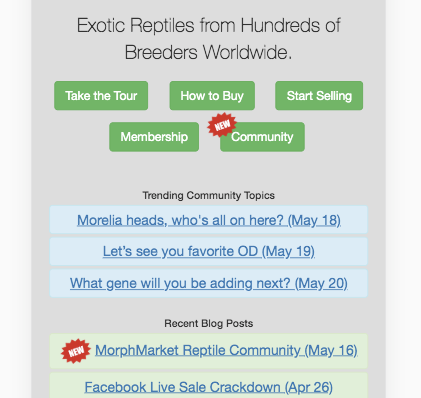 Will be playing with formula for what’s selected as “trending”. 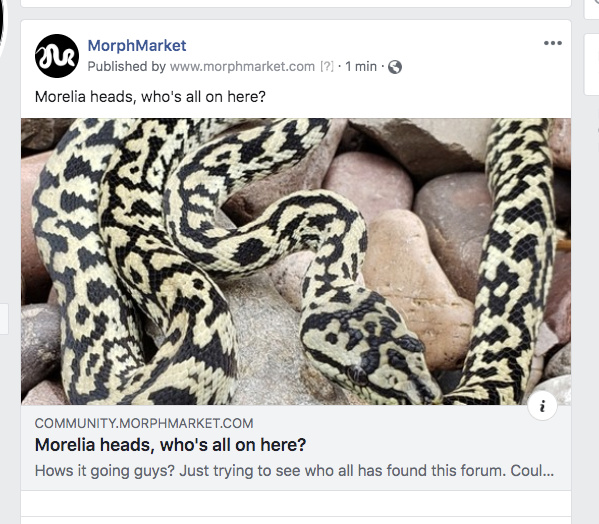 Is this straight syndication or curated?

Selected with algorithms, but no human in the loop.

One change I think I’m going to make – instead of posting topics to FB I’m going to post actual posts, which may not be the initial topic. Because we have lots of good content that is not the initial post.

Now with attribution! Get your name on the home page of MorphMarket: 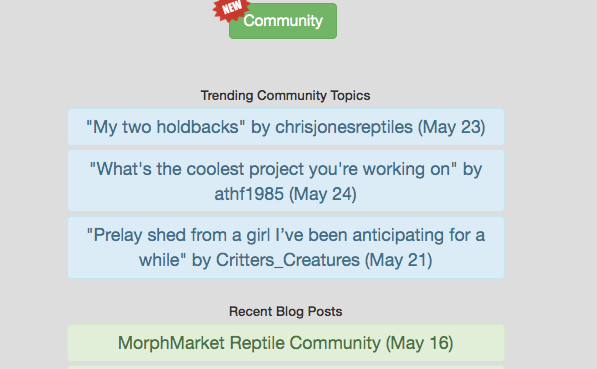 Integration #3: Category-specific community discussions. I mapped each of the Category/Tag combos to the appropriate top level MorphMarket category. Below the index you’ll see a few of the latest community topics. These are one of our most highly trafficked pages. 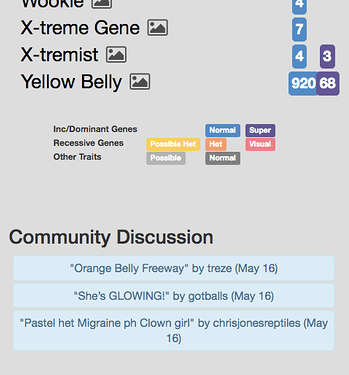 Integration #4: Link from User and Store profiles to Community Profile

This feature will help sellers get to know the buyers who are inquiring to them, if they are active community users.

Really excited this feature which will help the buyers get to know the sellers they are considering buying from. This is a chance for sellers be highlighted for their knowledge and helpfulness. 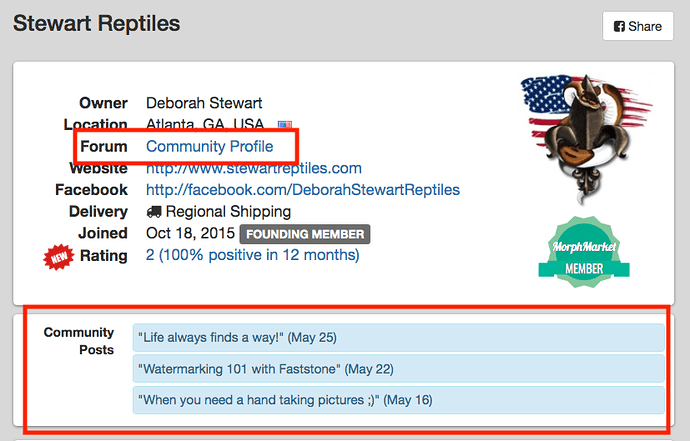 TLDR: the social sharing is working well, and so I invested more time to fix a design flaw that should result in 2-3x more traffic from those posts.

Spent most of my Saturday working to overhaul the social sharing system. The aforementioned integrations work based on monitoring and sharing Topics. After rolling this out and seeing how the MRC works, I realized that this had been a mistake not to monitor Posts instead of Topics. For example, we have many threads full of great share-worthy posts (e.g., the Show Me Your …), yet we would only ever feature those entire threads a single time.

Now our sharing to FB/Twitter are based on Posts, so even if the initial topic isn’t shared, a later post may be. I updated the algorithms by how they are selected as well to now consider things such as whether an image is present. Images increase chance of being re-shared, however, a longer text-only post can also be considered for re-sharing.

Here’s an example of a new share – this was actually a follow-up by the OP @northernregius to her own introduction post with this beautiful photo, which before would never have been re-shared. BTW Community Feedback posts are never re-shared, since this kind of meta-conversation isn’t broadly interesting to those who aren’t even bought into the forums yet.