I have a 2 year old ball Python who is a Pewter Butter and I would love to start breeding ball pythons soon but I’m trying to find the best genetic project that would go with her genes to start off with so I can find her a boyfriend soon!

I’ve been thinking of pairing her with a Blue Eyed Lousistic (but, but), a normal pewter, or even a pewter butter. But I wanted to ask any breeders what a fun genetic project would be that I possibly haven’t though of with her genetics!

This is her! Her name is Rey 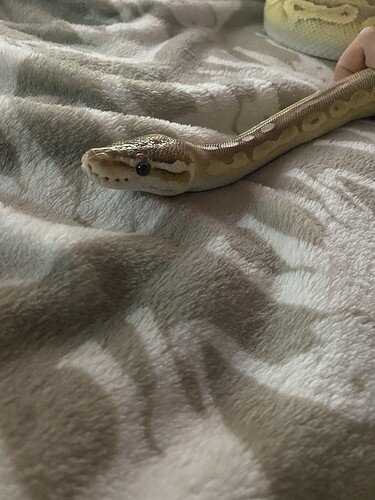 I would not recommend pairing her to anything with cinnamon in it (pewter is cinnamon + pastel)
Super cinnamons have a tendency to come out with deformities, such as duckbilling and spinal kinking.
Not something I think a new breeder should risk dealing with, since you may need to cull babies if the kinking is too severe. I had to cull a baby from my very first clutch due to a different issue, but it hurt my heart so much to do so.

If you want dark snakes, I would consider adding mahogany to the mix. It doesn’t have any of the issues that super cinnamon or super black pastel have (that I’m aware of, anyways!)
I personally have a pair that will hopefully produce some cinnamon sumas if the odds gods love me enough haha

I also wouldn’t personally recommend any BEL complex genes as you won’t be able to easily identify any other morphs in the mix, which can make it difficult to sell any babies you don’t keep.

I’d personally go with a male with at least banana in him, but that’s just me — I love banana and think it goes great with almost everything

You could also invest in a male with a visual recessive (pied, clown, axanthic, ultramel, or albino are some of the ones I can think of off the top of my head) to produce hets with her!

But I’d take a look on MorphMarket and see what you like! You can use the MorphMarket Calculator on there to see what certain pairings would produce.