Could a conservative government mean BANS ON EXOTIC PET TRADE

With Canada swaying to a conservative government, it looks like a ton of us will be out of jobs. Conservatives planning on the ban of the entire exotic pet trade.

EDIT: Disregard this comment, see my later comments with the relevant pdf

I do not believe this to be the case. Here is a link to the relevant campaign point, nowhere is mentioned specialty pets. This seems to me to be aimed towards puppy mills, and meat livestock transportation. I highly doubt Mr. O’Toole has a principled stance on the issue (or really any other issue, but that’s just me being politically stranded talking), and lacks the conviction that the animal rights crazies have. I know for a fact that relevant industry leaders have called to him directly about this, that being said, the way it is stated is just vague enough that there is a chance it could be a problem.

From the first link:

I think it will mainly be aimed at shutting down unethical and “brown box” importation rather than banning it completely. However it is important to make sure that it stays at the preventing criminals point and not banning importation completely. On the topic of them looking good to the public, they want to appear to be working to prioritize public health, the opinions of a small population isn’t as important but they still are going to want to appear good to them to. The more your voice is heard the less likely it is that they are going to ban importation and possibly later, exotic pets.

It is pretty direct wording. “End the importation of and Trade…” I have emailed the MP and so far, it looks like a total ban. Manitoba 2.0. Funny how they flagged my post. This has everything to do with the future of the reptile community in Canada.

Emailed the MP. It’s a total ban on the exotic pet trade. Grandfathered pets only.

The government always have tackled illegal importation. It wouldn’t be something to campaign about. This is a direct threat to our businesses and anyone owning an exotic pet because, even the supplies will be banned. That means foreign isopods and spring tails, coco choir specifically made for exotics, fruit treats made for parrots and lizards, and anything grown or with the possibility of spreading diseases…

Do you have a direct link to this proposed policy? On my phone it seems it just goes to their campaign website

Do a google search “conservatives plan to ban exotic pet trade” and go to their official site, scroll down. I’d show you the screenshot of the email from the page or the MP but it isn’t allowing me to upload a photo.

Page 92 of their campaign manifesto, can be found here

Thanks for the heads up

Wrong. The one you mention is under animal welfare and not disease prevention, where the point is made directly. It’s under Page 61 and not 92. 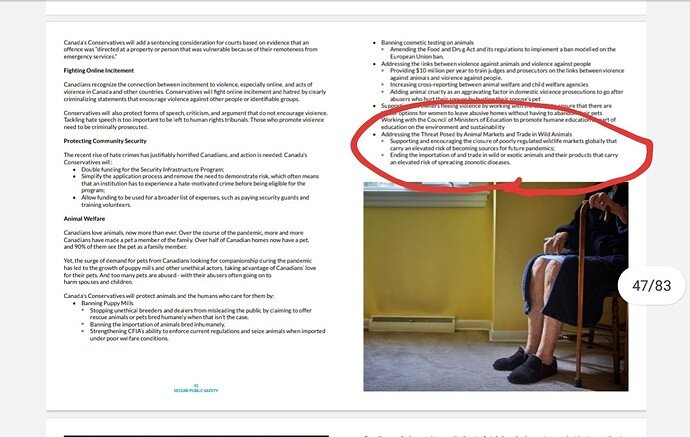 It’s on both pages. I wasn’t aware of this, is this a new development? I suppose if this was just dropped that would be why I have only heard of it now. I thought their only interest was puppy mills, I suppose I’m going to have to make some calls and emails

That would fall under page 93… they wrote the same thing twice. They even got it under disease prevention.