This one is just a bit of a doozy. TL;DR: I paired a female with no known hets to two recessive males and got two recessive hatchlings (what looks to be a possible axanthic and albino), except that the recessives involved were clown and ghost and none of the parents had any known hets or poss hets.

So this year I paired my dinker female with two males: an Enchi clown male (produced by Casey Lazik, no known hets) and a chocolate OG male (produced by American Made Exotics, no known hets anywhere in his lineage). The dinker female was a pickup from a local exotic pet store about 7 years ago - I’ve had her since she was a hatchling, she was sold as a normal with no hets, and she had never been paired before.

She was paired 5 times with the chocolate OG male and I never saw a lock. She was paired one time with the Enchi clown male and I saw a visual lock, but she ovulated less than two weeks later (which makes me think it’s a lot more likely the chocolate male got the job done). She produced 5 eggs, 3 of which were slugs (she ovulated during the winter storms here in Texas) and the other two were healthy and made it through incubation.

Wednesday was Day 61 and there was a pip, so I cut both eggs, fully expecting to see two little normal babies. Instead, I got a visual albino (from two parents I had no idea were het albino) and what looks like a visual axanthic but opinions seem to be about 60/40 that it is axanthic or is not (I will post updated pictures after it sheds). Definitely one but possibly two visual recessives from a het to het pairing out of two eggs, where those hets on both sides of the parentage were completely unknown. I contacted Casey Lazik and he said he’s never had albino or axanthic in any of his clown lines, and AME verified that no known hets were in my chocolate male’s lineage but it’s entirely possible he had one floating around unknown, as they work with both albino and axanthic, I believe.

Now, I’m not seeing Enchi in either of the hatchlings (they haven’t shed yet, obviously) and I’m not necessarily seeing chocolate in either, but that could be that a) I’m not super comfortable IDing chocolate yet or b) bad odds on that inc dom. Since the odds of this happening are so astronomically low though, I’m also kind of wondering about whether this is a partho clutch? Both hatchlings probed female, and both seem healthy so far, but I will be keeping a close eye on them in case it is a partho clutch. I will do a repeat pairing this fall with the chocolate OG male. Crazy odds on this clutch - I got one definite visual recessive unknown on both sides of the pairing, another possible visual recessive unknown on both sides of the pairing, and/or one or both animals being the result of parthenogenesis.

Wondering if anyone has any insight, thoughts, etc. and just wanted to share what a crazy thing this is!

I’ve included pics of mom, possible dad (the chocolate OG - I don’t own the Enchi clown), and the hatchlings. Also wanted to note that in the picture of the poss axanthic hatchling I can see a little bit of yellow coming through on the dorsal, but in person this snake is pure silver with no brown or yellow tinge. I will, of course, reserve complete judgment until they both shed. 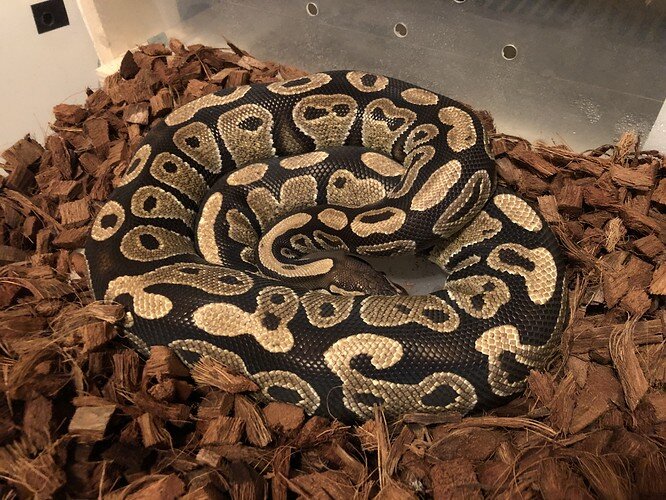 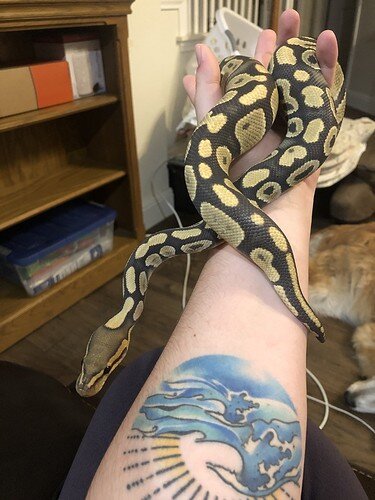 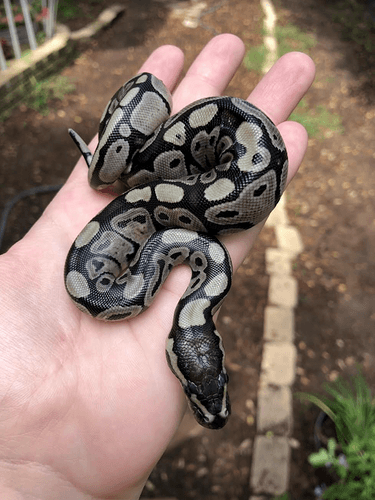 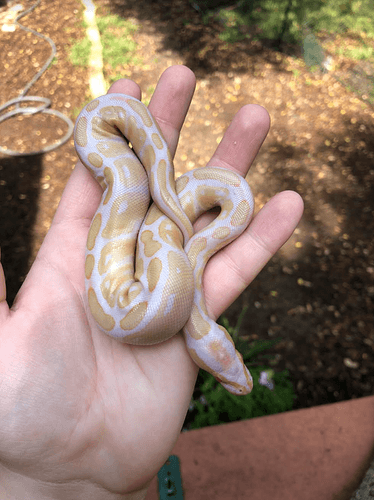 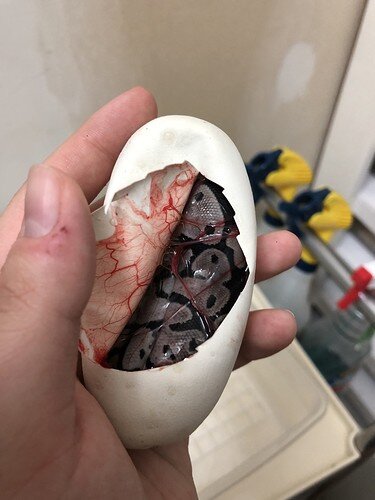 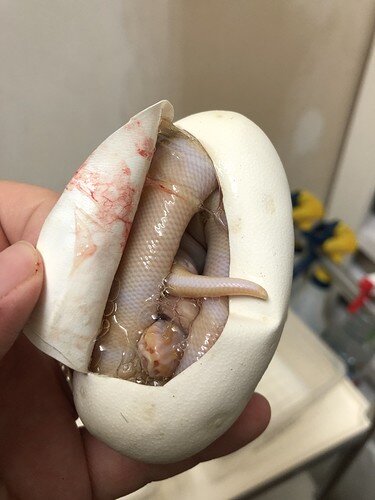 If it’s partho they will all be female. Rereading this you said they were both female. I don’t think the one is axanthic I think it will look a lot different after shed. That’s awesome that you hit a visual albino though! Post pictures after shed and I can help you to identify if it has chocolate or not.

Odds are that Mom is a het Albino and you got a partho clutch. I do not think you have an Axanthic, you just have a pale baby that will normalize in colour after it sheds and has a few days out of egg for the pigments to oxidize some.

Likely what happened was that a wholesaler picked up a bunch of poss het animals from a breeder that did not want to deal with trying to market them and you just happened to get lucky and pick up one that was indeed het. This sort of thing has been happening for decades

In person it looks undeniably axanthic to me (like, to the point where I did not even remotely question it until someone else brought it up) but I could absolutely be wrong on that and I’ll be interested to see what it looks like after shed.

I’ve probed both hatchlings and they both probed female, but that could just be good odds on the sexes. I’m hoping for the sake of the hatchlings that this is not a partho clutch, because I know those animals tend to have significant failure to thrive issues. So far they both seem healthy, but I’ll keep a close eye and will definitely post updated pictures after they shed.

In person it looks undeniably axanthic to me

I ve had them were I’d bet my house they were axanthic. And after they shed they look totally different.

Figured I’d post an update. Both hatchlings have now shed. I’m not seeing enchi in either and I don’t believe I see chocolate either. The darker one definitely doesn’t look to be silver like an axanthic, but it’s still way more grey than I would expect for a normal. 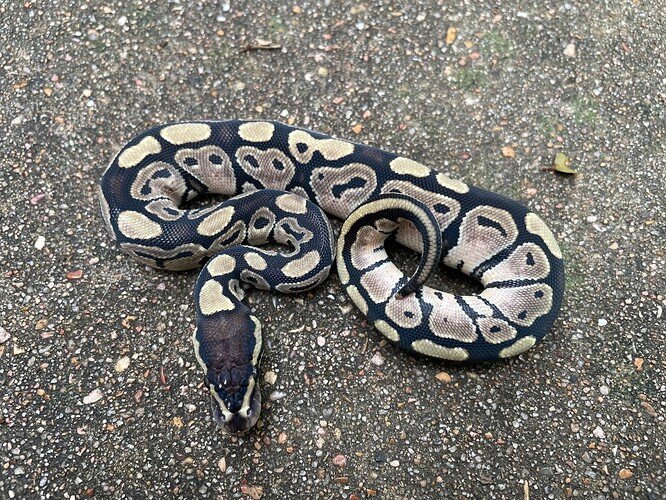 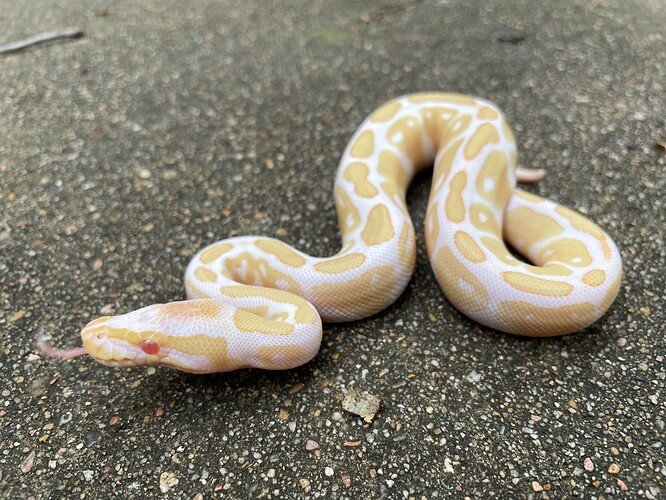