Yeah I know, kobylka posted a YouTube video in 2017 about a ball python that looks like a super leopard.
Besides kobylka’s Super Leopard video, I’ve seen several other videos that say they are Super Leopards because they look different from regular leopards.

But I mean, does it mean that there are real super leopards that unconditionally inherit leopards when breeding?Is there a breeder super leopard that only passed on leopards to their offspring with at least 5-6 clutches?
Or is it just named Super Leopard because it looks different from Leopard?

does a real super leopard that unconditionally inherit leopard exists?

The question is not about inheritance (which is what it got from its parents) but about how it breeds out.

Yes, there are homozygous Leopards that produce all Leopard offspring. Graziani had them years before @jkobylka put out the video and I know from the BLBC forum that there were a handful of others out there with them as well.

As far as a homozygous pinstripe, @owalreptiles is the man to talk to

From everyone I’ve talked to the super pin itself looks like a normal pin, you just simply can’t tell without proving it out. However I’ve seen things like fire pos super pin that has a pattern so reduced and a color that you wouldn’t expect from a standard fire pin. I’m pretty confident that animal will prove out, but that’s to be determined still obviously. So coming years there might be some combos that are revealed to show it.

I’ve been posting my trails of pos super pins through the years. I had two clutches that between some pin x pin pairings, I had 3.4 33% pos super pins. So far I have proven all of the males not to be supers. I have eggs sitting in the incubator form one female. Other 3 don’t seem to want to give me any clues this year lol. So come late September I might have something new to report.

I have no updated pics apparently, but here’s a group shot of one clutch, hoping at least one of them proves out. Lemonblast het hypo x pin 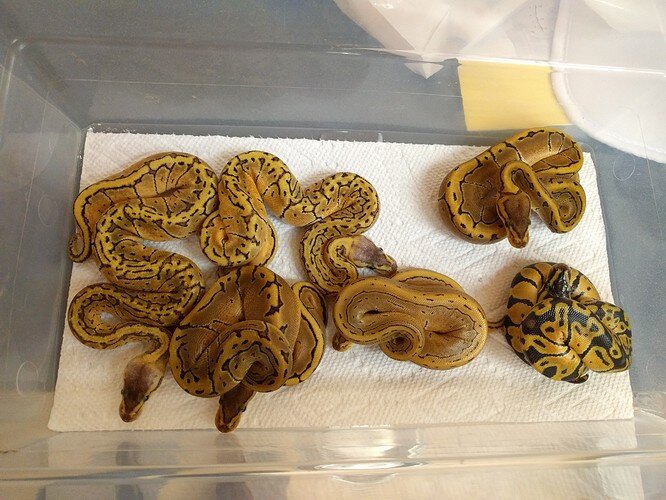 Thanks to both who answered my question, it was a big help for me. I was in pain for days solving this question alone

I think Gavin at Balls2U had avideo recently on YouTube where he talked about super Leopard. He was visiting another breeder and in the clutch there was a leo which was definitely darker and had different markings. Enough that it could be identified, perhaps? Interestingly, he also mentioned the possibility that leo could be allelic with acid. He seemed to have some visual evidence, but I don’t think he’s committed to it because I’m not sure there have been any breeding trials on that. Would be amazing to find out though!

he also mentioned the possibility that leo could be allelic with acid. He seemed to have some visual evidence, but I don’t think he’s committed to it because I’m not sure there have been any breeding trials on that. Would be amazing to find out though!

That video is old and the info in it is a bit out of date. @jk-reptiles proved out that Acid and Leo are not allelic

Ah, thank you. I hadn’t heard any follow up yet. I’ll take his word for it, I certainly don’t have the resources in terms of breeders to check, for one thing, no acid, working on getting that.

I’m not sure exactly how to set up the pairings to prove or disprove allelic genes.

Like if you breed a BluEL Lesser/Mojave, you only get Lessers and Mojaves, never more BluELs or wild-types
.
.
.

Is there a more up to date comprehensive list than the one here on this board?

Thank you for responding. I just started a new thread on this. Hopefully, others will benefit from the answers too. I’ve always felt that if one person in the class had a question, that meant at least some of my other students had the same question. And when it was one of my Marines, I knew that every damn one if them had the same question