Do you think he’ll go? And a discussion of genetic body size

He’s dumping his water and laying inverted. I don’t have the heart to tell him that he won’t grow follicles no matter how hard he tries

I’ve got a few snakes are genetically larger than average, and it’s something I play around with trying understand better through breeding. This male is 2700g. I have a Pastel Het Clown female that’s just shy of 4kg that I pair this snake with most years. Their babies are always 16-18” long at hatch and 80-85g at hatch.

I have another female het pied from Volta type lineage who is very large (~4200g). I’ve never paired her with a similarly large male like this guy but I plan to, to get a better understanding of how size is inherited. I’m aware that it comes from mitochondrial DNA. What I wonder is (and @t_h_wyman I’m sure knows a lot more about than I do) is size simply inherited or polygenic in BPs.

It’s something I spend a fair amount of time considering, especially since hearing the ‘Genetic Round Table’ episode on MPR a few years ago, where Dr. Wyman elaborates on dwarfs vs pygmoids and how each is inherited. 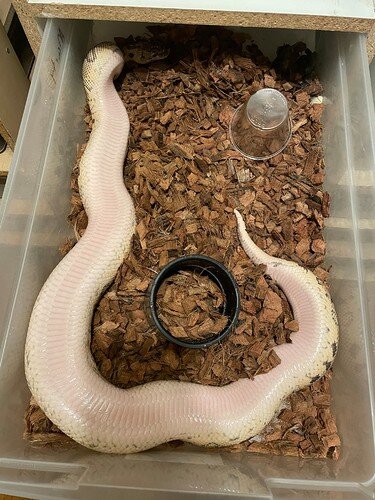 I have a 5500 gram female!!! She always lays big eggs her hatchlings are always bigger when born than any other females. All the eggs are incubated the same.

Wow! I break IG every time I post 4kg females, I can only imaging having one that big! It’s crazy how complex seemingly simple things can be. My guess is that size is probably inherited in different ways like in retics but none of my breedings so far have given me concrete evidence (that i would recognize anyway) on how it works. Not going to lie, I started down this path because both of the big females I mentioned always lay 9-11 eggs and they’re always good sized eggs lol.

That’s awesome. I got busy at work and forgot to order them a couple weeks ago, but outback had 5-6 gravid female volta types. A friend got one though and it laid 15 eggs!

She is definitely the exception to the rule! I wish all my gals laid that many. She is a butter fire nothing crazy I bred her to my super sable vanilla this year. Hope she lays me a bunch of sable creams!!!

A friend got one though and it laid 15 eggs!

That’s awesome!!! You should try and get a couple females from him!!!

I’ve noticed certain genes seem to be associated with larger snakes. It seems like BEL maker females consistently get a good size. I’ve seen more XL mojave females than I have any other morph I can think of. Pastels, clowns, and some pieds also seem to be consistently larger when there aren’t a bunch of other morphs at play.

Conversely I have an Enchi female that at 8-9 years old never passes 2kg. Every year she goes like clockwork at the same time. She just doesn’t get the season to season growth most of my bigger girls do. Lays 7 eggs every single time.

Wow 2700 grams for a male. I’ve only ever seen males lay inverted after a big meal that’s funny.

My biggest girl is a 3600 gram het gstripe, I can’t even imagine 5500! Although I have a female gargoyle that’s only 4.5yo and pushing 2800+ already, eats like a horse, she’s also 1 of the few females I have that continues feeding almost all the way until she lays. 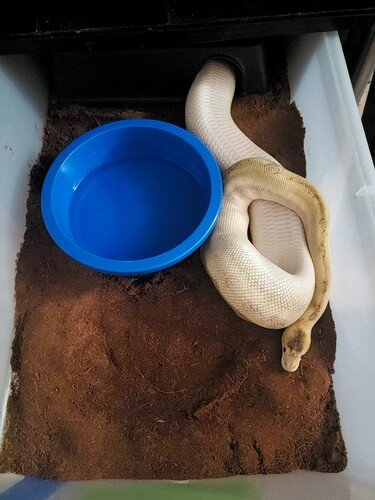 to get a better understanding of how size is inherited. I’m aware that it comes from mitochondrial DNA.

While it is true that mitochondria are predominantly inherited from the female and also that the female’s size can have an impact on offspring size, the mitochondria themselves do not play any role in size inheritance.
.
.

What I wonder is, is size simply inherited or polygenic in BPs.

Simple example - blood types. Everyone knows A, B, AB, and o and most people also know the ‘positive’ and ‘negative’ that goes with those, e.g., A-neg, AB-pos, etc. That ‘positive’ / ‘negative’ denotation is for Rh-factor, so technically A-neg is better written out as ARh- and AB-pos would be ABRh+. But in addition to those two fairly well known blood groups, there are another thirty-six groupings: Duffy, Kell, Kidd, Lewis, M, N…

What are the odds that your offspring will share the identical blood type as you?

That is going to depend on two things:

Let us assign your genotype as: Ao/Rr/dd/KK/Jj/ll/mm/Nn

And your mate as: BB/rr/dd/kk/jj/Ll/MM/nn

Apply this same logic then to size. Say you need all eight of those genes to be homozygous to have an 8000g animal: AA/RR/dd/KK/JJ/ll/mm/NN

But… each gene pair, depending on inheritance pattern, still plays some small role in size. In this manner, even if your offspring does not get the perfect combination of gene pairs, it is still possible to get some of the right pairs and thus have some influence on size. So maybe they only hit 4000g instead of 8000g

And it should be at least somewhat obvious that pairing two phenotypically similar animals should then play a role in increasing the frequency of the genes behind those phenotypes coming together to maintain the phenotype.
.
.
.

genes seem to be associated with larger snakes

This is more a correlation than a causation thing. None of my Mojaves have ever broken 1500g for example

Awesome explanation, thanks! It’s fascinating how much we both can and cannot control the genetics of these animals.