Does the love of reptiles come from personal experiences or something else?

Hey everyone, hope everybody is doing well during these hectic times. So my question to all of you is, do you think that a love for reptiles or animals in general for that matter is formed from personal experience or do you believe it is something deeper like some people being more predisposed to taking a interest to animals? I’ve wondered about this for a while now because when I look back on my childhood I was the only one in my family who took a heavy interest to reptiles and animals while the rest of my family strongly disliked them so I wondered if maybe it was at all possible that some people were predisposed to like animals more than others for some reason. My childhood was alot like many of yours in the way that I grew up with the family pets and the occasional fish tank here and there but no one else in my family really had anything significant until I took a interest in snakes and reptiles. I’m interested to see what all of yours thoughts are and if you would like you are more than welcome to share the experience or experiences that made you take a interest to reptiles!

I am also the only one in my know family that is not deathly afire of snakes and lizards. I have always loved the outdoors, and plants. I mean the first time I saw a boa was when I was maybe 4 ish and I can still remember it. she was albino, and she was huge, and after that my parents say that asked for a snake or that snake until I was 16 when I received my boa Kai. Best childhood meniers were of going to Cornell’s bug day.

There are multiple factors that need to be looked at on a individual basis.

Did you grow up with animals around you?

How did your parents react to animals Infront of you?

What moves did you watch as a child?

What was your first experience of holding a animal like?

Were you allowed to roam around a pick up bugs?

You wouldn’t believe how much your conscienceness is influenced by other people’s actions when your a child.
I have seen adults spend a lot of their lives extremely withdrawn because they grew up in a argumentative household.
Growing up around people who are scared of something will increase the likelihood of you growing up scared of it.

Take a look at some of the children in India, they roam the bushes searching for venomous snakes to capture as a sport. Their parents shown them “this IS dangerous but can be dealt with”.

I think the fact you didn’t have animals as a child but also never had a bad impression printed on you gave you reason to be inquisitive without worry.

My personal experience has been full of animals.
When I was young we had 2 alsatians and a collie, 3 cats, a lot of fish, hamsters, mice, rabbits… A lot of animals. My brother and step dad had huge fishtanks and would compete against each other over who could get the brightest/nicest fish.

I seemed to get bit/scratched/kicked a lot more that anyone else in my house and my mum always said to me “The *** didn’t bite you for no reason, this is what you did to get yourself messed up…”

I got bit on the ass by the neighbors dog while climbing the fence to get a ball back when I was about 7 and that dog got put down (it had bit a few kids by this point) but I always felt it was my fault and never blamed the dog. I think that had a big impact on how I act around animals but never put me off them. 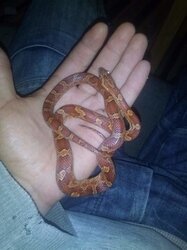 This was my brother-in-laws corn snake about 5-6 years ago. It spent ages just slithering between my fingers and immediately after taking this picture, I turned to my wife and said “I want a snake”. It took a few years to actually get round to getting one but I convinced her eventually

I loved reading your journey about how you got around to being interested in animals and reptiles, I myself made a lot of connections with your experiences and now that you mention it I can pinpoint some of the key moments that sort of jumpstarted my passion for reptiles. My earliest memory of a reptile was when I was 4 or 5 and I had caught a baby garter snake and brought it inside to show my parents as well as the time I went to the zoo for the first time (also around 5 or 6) and my mom remembers me being extremely interested in all the reptiles and insect exhibits. I think what helped my interest was the fact that even though my mom did not like reptiles her and my dad still wanted to support my interest and gave reptiles a shot by getting me a baby ball python which I still have to this day. I was also that kid that played in the dirt and I would come inside after playing and my parents would find that I had stuffed little pill bugs in pockets so I could secretly keep them. As the years pass I only fall in love with these incredible animals more and more and I just love seeing some of my family members giving them a try and not try to shut them down automatically and I definitely see myself keeping reptiles into old age.

I grew up in a farming community, my best friend was the farmers son, we were allowed to roam around freely from the age of 7 all over the estate which was around 300 acres. We would search for slow worms, newts, frogs, grass snakes and adders just to look at them, we found them more interesting than the cats, dogs and horses on the farm. We both developed a keen interest in birds too and lived close to a small heron colony and a woodland reserve so we got to see a lot of native and migratory species.

I have always attributed this wondrous childhood to my love of animals and specifically snakes… Finding an adder back in the day was like hitting the Jack pot!

I have always taken an interest in animals, but never saw a snake until we looked after a yearling corn snake for a family friend. I was 9. My family were not too bothered, but I was absolutely enthralled by him, and immediately started a campaign with my father to have one of my own. He said I didn’t know enough about snakes to be able to keep one as a pet, so… Of course, researching the needs of corn snakes lead me to other species of snake and exotic animal, and that has been a lifelong obsession since then!

My father wasn’t keen at all but after seeing that the ‘snake obsession’ wasn’t going away, he eventually allowed me to buy my first snake when I was 15. I chose a baby Amel corn snake that I still have today (he’s 14 years old now). He’s been with me the whole time, moved house with me several times and even moved country. I’d never leave him behind!

I’ve since kept and bred dozens of species, including reptiles, inverts, amphibians and tropical fish.

I was raised in an animal loving family there was a dog, a cat and a bird in my home before I came along, and my parents were avid fish keepers also.

Much later on when I ask to own a snake, it did not go over too well I could have anything (dog,cat,rat, mouse, hamster, birds, fish) but that’s where the line was drawn.

I think some times people are just born as “animal people” and I am definitely one of them. I remember begging my mom for a pet anaconda at age 5/6 and of course she said no, but she did allow hermit crabs. And then eventually a few goats, some sheep, a pair of llamas, a horse, rabbits, chickens, and turkeys. I was homeschooled and involved in 4-H which allowed my animal husbandry experience to thrive, and by the time I graduated high school I had a thriving herd of ADGA registered, show champion dairy goats, and a beautiful flock of Merino and Shetland sheep.

Alas, I had to sell them before leaving for college where I went into Molecular Biology with the plan to go into vet school, and it was during this time when I adopted my first ball python, a yellow belly male named Phoenix. He wasn’t the nicest, struck a lot, and was a super picky eater, but I loved him anyway. That was just the beginning of my ball python obsession. Over the next few years my collection grew to ~6-7, which I then had to sell when I moved across the country for graduate school.
Now, approximately 7 years after my first ball python, I am getting back into the hobby because I miss them entirely too much.
So I guess love of animals just run in my blood, and isn’t specifically listed to just reptiles, because I’m currently living in a small one bedroom apartment with four hermit crabs, a ball python and a Great Dane

Personally I think its a predisposition and experience combined. If say someone is predisposed to be curious about other lifeforms to begin with and then gets the experience of interaction with various lifeforms then I think those individuals tend to end up more interested and open to a wider variety of creatures. Personally as somebody who has always enjoyed science and biology in particular I find a lot of stuff interesting and its not even limited to animals. Im interested in plants fungi microscopic stuff you name it. Among animals I sometimes try to find groups that interest me the most ie. For mammals my fav group is probably the Order Carnivora. Life is truly fascinating given that chemically all our genetic codes of our DNA are all the same 4 main nitrogenous bases (makes up the rungs of the Dna twisty ladder 2 bases a rung-- the AT rung and GC rung)