Very few snakes match the regal reputation of the Eastern Indigo. Even their genus name, Drymarchon, means “forest ruler”. As a living culmination of intelligence, charm, and prestige, these powerful Colubrids are the largest snakes native to the United States. However, despite their substantial size, Eastern Indigos are most renowned for their calm, gentle nature, and rank as one of the most rewarding species an avid reptile enthusiast could ever keep. 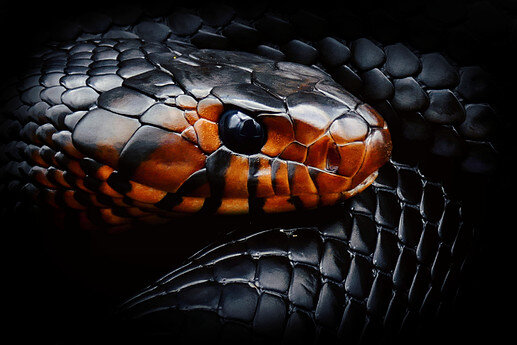 The Brink of Extinction

Like many endangered animals, Eastern Indigos have faced continuous tragedy as a result of human recklessness. Habitat loss, intentional killing, overcollection and chemical exposure have taken a great toll on their wild populations. In 1978, Eastern Indigos were listed as a threatened species under the Endangered Species Act, although serious conservation efforts would not be made until many decades later. Populations continued to decrease, with the number of Eastern Indigos observed in the field decreasing by almost 99% in 2009.

Fortunately, it was around this time that conservancies began stepping forward to preserve and propagate their wild populations. In 2008, The Orianne Society launched a protection program that focused on restoring the habitat of Eastern Indigos, which then branched out to become the Orianne Center for Indigo Conservation (OCIC). Now operated by the Central Florida Zoo and Botanical Gardens, a colony of over 100 Eastern Indigo snakes are managed in large, outdoor environments that closely replicate their natural habitat. Between 2010 and 2019, 216 Eastern Indigo snakes were released into protected wilderness with hopes that wild propagation will continue to prosper.

As a federally protected species under the Endangered Species Act, it is prohibited by law to capture, collect, hunt, harm or kill a wild Eastern Indigo snake unless otherwise permitted to do so. Thankfully, the regulations on captive bred Eastern Indigos are much simpler, as it primarily serves to regulate interstate commerce (sales from across state lines). Therefore, if you are purchasing your Eastern Indigo from a breeder within state lines, you do not need to apply for a permit and may conduct the sale as you would with non-regulated snakes. If you are acquiring an Eastern Indigo from a breeder that is outside of your state, you must apply for an Interstate Commerce Permit, which can now be completed online through the USFWS ePermit system. The breeder will walk you through the application process, which will include questions regarding your herpetocultural experience, your reason for acquiring an Eastern Indigo, and the enclosure you plan to house them in. After submitting your application along with a $100 processing fee, you should expect to receive your permit within 1-3 months, assuming it was approved. Keep in mind that USFWS will only approve applicants that intend to contribute to protection efforts in some way, be it through study or propagation of the species. You should make this very clear in your application.

While basic husbandry for Eastern Indigos is relatively simple, these incredibly active and inquisitive snakes require more than just a suitable habitat. In order for them to thrive, plenty of space and appropriate enrichment should be provided, as well. While young Eastern Indigos can be temporarily kept comfortable in a plastic tub, these snakes achieve size at a rapid rate and will quickly outgrow them within the first year. Therefore, long-term housing should accommodate their size as much as possible – the bigger the enclosure, the better. My adult Eastern Indigos are kept in 8ft. x 2ft. x 2ft. PVC enclosures and use up every inch exploring, basking, hunting or prospecting. 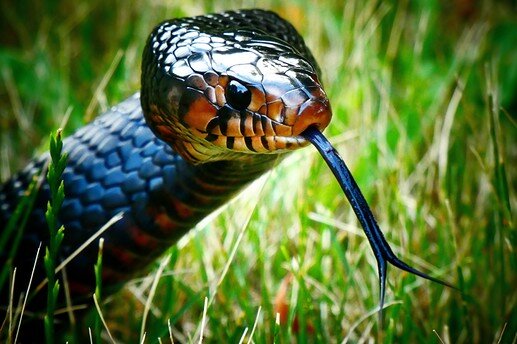 Selecting the appropriate substrate is especially important for Eastern Indigos. Equipped with a fast metabolism and a seemingly endless appetite, this species eats more frequently than most and therefore defecates more as a result. With that said, their substrate should have excellent absorption properties and be easy to clean on a regular basis. A balanced blend of potting soil and sphagnum moss is great for yearlings and older; hatchlings are best kept on paper towels for the first few months to prevent the ingestion of substrate.

As natives to a humid subtropical climate, Eastern Indigos thrive best in moderate humidity between 60-70% RH; though unfortunately, so does bacteria. Since this species defecates rather frequently, it is crucial to keep their environment sanitary at all times to avoid the onset of infection.

Despite being native to the warm, subtropical climate of the southeastern United States, Eastern Indigos are exceptionally sensitive to heat. They typically become uncomfortable when temperatures exceed 85°F and tend to thrive better with an ambient temperature range between 78-82°F. Extended exposure to temperatures above 90°F can prove fatal for this species, therefore it is imperative to equip any and all heat sources with an accurate and reliable thermostat, preferably a proportional thermostat.

Various types of heating elements can be used, including UTHs (under-tank heaters), heat tape, CHEs (ceramic heat emitters), RHPs (radiant heat panels), or a temperature-controlled room to provide ambient heat. For additional enrichment, you can also provide full spectrum UVA + UVB during the early afternoon hours to allow them to bask as they enjoy doing in the wild. Access to natural sunlight is also beneficial for Eastern Indigos.

One of the most exciting aspects of keeping Eastern Indigos is feeding them. This species is known for their enthusiastic feeding response, so extra long feeding tongs are encouraged.

While it is not required, dietary variety is beneficial for Eastern Indigos. They can do perfectly fine on rodents alone, but offering chicks, quail, and certain fish (such as tilapia and salmon) on top of rodents is a great form of enrichment for this species. Reptilinks of all kinds are also easily devoured by Eastern Indigos. You can even offer cuts of chicken from the grocery store to include in their diet as long as nothing is added to them. That said, all feeders that are not whole prey items should be offered sparingly. They lack the calcium and other nutrients that snakes need to grow and thrive, and thus should never be fed exclusively. Be sure to offer at least one appropriately sized whole prey item each feeding to assure your snake is receiving enough nutrients.

Eastern Indigos are notorious for their incredibly fast metabolisms. This means they must be fed more often than most other snakes. We feed our juveniles every 4-5 days, and our adults every 5-6 days. Another crucial aspect to feeding Eastern Indigos is that they do not tolerate large meals well and may regurgitate if fed prey that is too large for them. Instead, they should be fed a few smaller prey items with each feeding. As a general rule of thumb, young Eastern Indigos should be fed prey that is just slightly bigger than their head, and adults may eat prey that is roughly 2-3 times the size of their head. 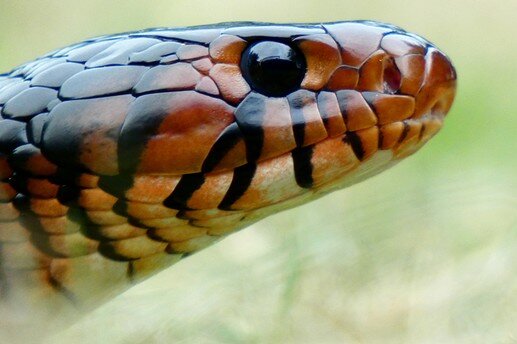 Enrichment is exceptionally beneficial for Eastern Indigos in particular. Anything you can provide for them to explore they will greatly appreciate. This is a very intelligent species and should be given plenty of mental stimulation for this reason. We offer PVC pipes, ledges, sturdy branches, leaf litter, and make-shift rock caves for them to explore throughout the day. They also greatly appreciate being outdoors when the weather is calm and mild, but this is only recommended for adults, as young Eastern Indigos are small and often flighty, making them much more prone to escape. 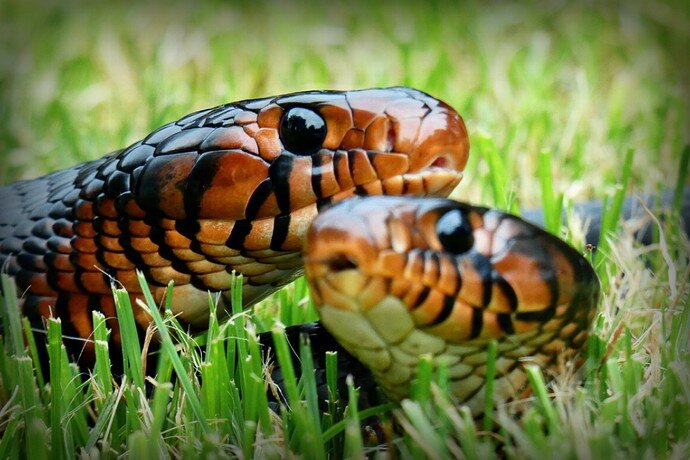 The Einstein of Snakes

When most people think of intelligent animals, snakes are usually excluded from the rankings. However, Eastern Indigos are the smartest reptiles I have ever had the pleasure of working with. Their inquisitive nature and curiosity is matched with equal confidence and tenacity, making them a great candidate for problem-solving exercises. One of our Eastern Indigos, Blackjack, recently displayed a level of intelligence that has opened up a whole new realm of possibilities for these amazing animals. When provided with an advanced food puzzle meant for dogs, Blackjack not only excelled in his very first attempt, but he also managed to solve the entire puzzle within 15 minutes. To reach the mice and quail carefully hidden within the puzzle’s numerous compartments, Blackjack had to find a way to move the flippers and rollers that blocked his path. When he initially approached the puzzle, he quickly picked up the scent of his prey. After frantically darting around for a while, he soon realized that the prey was not magically falling into his mouth as usual. He then began to hunt, and upon discovering that his food was hidden beneath, he tried various different ways to get to his prize. He first learned that by precisely nudging the rollers along the track, he could access his meal. This discovery encouraged him to continue, and he then learned that he could nudge and even bite the flippers to shift them out of the way, where his tasty treat was waiting for him.

While they may require more maintenance and investment, Eastern Indigos are one of the most intelligent and rewarding snake species a passionate herpetoculturist could ever keep. They offer a one-of-a-kind experience to their keepers and serve as the pinnacle of snakes as a whole. Living up to their title as forest ruler, they will forever be the ultimate favorite among many who have had the fortunate opportunity of working with them.

What a thorough write-up! Really enjoyable and informative!

Thank you, I’m happy to share! For anyone interested in having a hard copy of this article, it will be published in the upcoming edition of Reptiles Magazine

I love having you as part of our forum @creaturesofnightshade! I am so pleased with these care guides because there is not a lot of people that devote the amount of time it takes to write a comprehensive guide. So much respect.

4 Likes
Not sure which one to get