Hello… Does this look too small for this guy? He is 344 grams. He is in a 15 liter tub. Thanks for any advice. I error on the side of too small to make them feel cozy, but just wanted to be sure. I’m about done with a new enclosure, but probably going to put him into a bigger tub inside of the new enclosure until he is full grown. 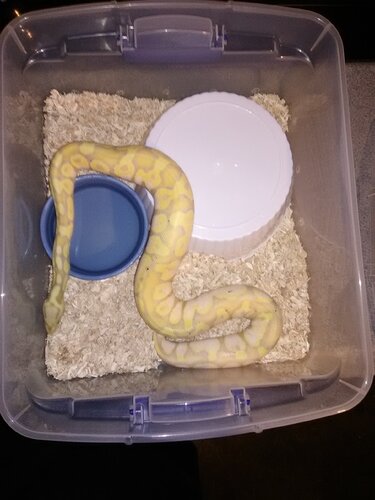 The general rule of thumb is L+W < length of snake.
That should give them enough room to minimally stretch out and still include a water bowl and other enclosure items.

The photo looks a bit cramped to me.

Depending on the tub 2 hides in all instances are not a necessity (although if you want to provide a second by all means!)…but a clear tub where light is going to get in pretty consistently(more similar to a tank than a colored tub), probably be a good idea.

Looks like he’s ready for an upgrade but even 4-6 inches longer should be good yeah?

I know many people are going for the cozy style, but I have to be honest I don’t. The babies of only 100 gram I now start in those 45 liter Ikea tubs and they use every inch of it. In the beginning I even put our first three babies at about 100 gram in a 100 cm x 50 cm x 50 cm terrarium and never had them refusing one meal or having problem shedding and till now they are the most relaxed snakes we have ( oke, our biggest does now sometimes refuse a week when she is shedding but she is already something like 1700 gram so no worry there)They all eat like monsters so it seems they are at the minimum oke with it. But my setup is also not at all minimalistic so it might feel cozy because of that.

So I know I’m maybe not the best one to answer your question because the way I do it is quite going against the common husbandry ideas, but to be honest, it does look quite cramped. I was wondering what the white thingy is, is a hide? I don’t see an entrance to it. If not, than how can the snake thermo regulate? Which side is the hot spot and which the colder one?

Don’t get me wrong, I’m not against the minimalic enclosures or smaller enclosures because a lot of people have proven that it works for them so who am I as, only keeping snakes for two years, to debate them. But I think a snake should at least have the space to switch between hot and colder and stretch the mayor part of their body. And in a see through tub, I would at least give them a hide on both sides, and then space for the water dish. The bigger tub is, I think a good idea. Maybe even the full new enclosure might work if you put enough hiding places and things clutter like fake plants and big hidding pieces of bark in it. But that depends on the snake. I myself am planning on down sizing one girl today from a 130 liter Ikea tub to a 55 liter ikea tub. I bought her at 1,5 years old and always stayed in a rack system. She seems to not like the big space that much. She seems too stressed about the open space above her.

Maybe you should just give bigger a try. If you notice problem in feeding, behavour or shedding, the tubs are there waiting for him. Downsizing is something which can be done in a very small amount of time. But if you try a new enclosure, don’t do it if the day he has to eat or the two days after. Just give him some time to settle in.

Yes, the white thing is a hide. I put them in bigger tubs with hides at both ends.
I also finished my new enclosure. I already have 2 vision 400s. These are 4’x2’x12"? I just finished a 3x2x2 enclosure. I’m running it to check temps and humidity.

Does this look better? Also the cage I built. I wish I had taken more carpentry classes. 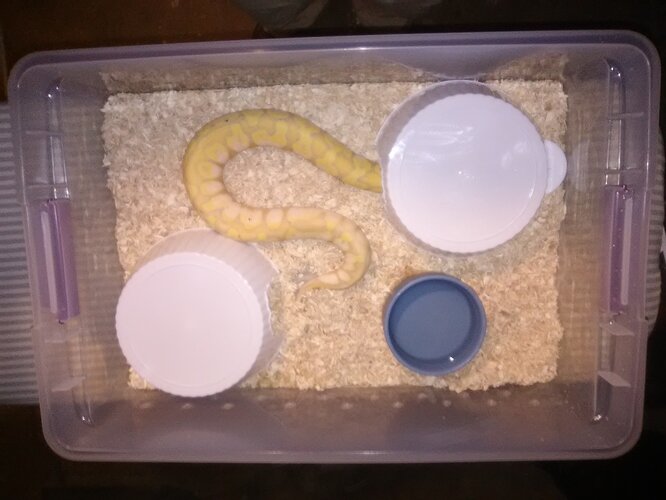 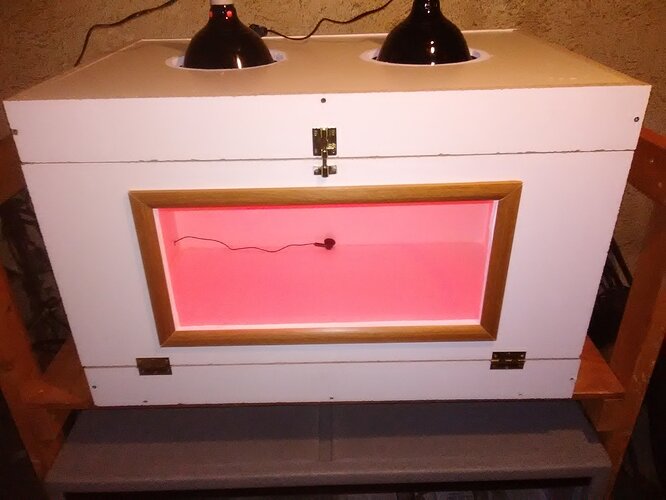 Looks great, more than I could do. But definitely large for one that size. Not sure what the light is for? Is that part of the heating element instead of UTH?

Might take it awhile to feel comfortable in something that large but if you have enough hides it can be done.

I’m keeping them inside tubs inside the enclosure until they are large enough.