Well, my first crestie eggs finally hatched. One was out of the egg last night and appears to be doing well. This morning the second one had pipped and was dead with just its nose out of the egg.

Any tips to keep that from happening next time or was it just kind of a bad luck thing?
Healthy baby: 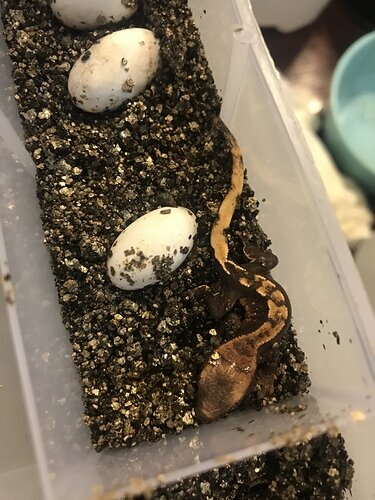 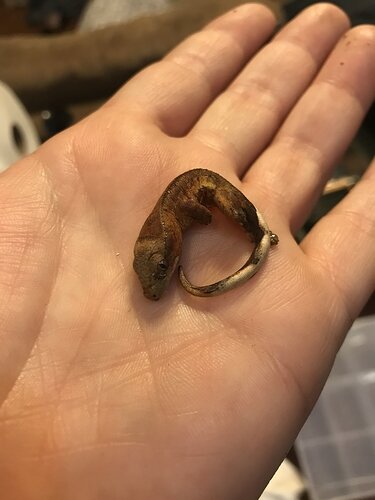 There is no real way to prevent deaths like this in hatchlings of any kind. You can have this happen with every species of egg layer. It just means something likely wasn’t right with its development, and natural selection took place because it wasn’t strong enough. Had it happen with chickens a couple times in the past. This happens more often than you would think, but yes it is technically bad luck.

I will add that sometimes you can save them by helping them once they pip, but it doesn’t always work. I will share my story with a chicken as an example. One chicken I had that pipped and was chirping like mad so I decided to help it after a bit. Started cracking the egg and the membrane was thick and leathery like a reptile egg. I carefully cut the egg after pinching a bit of it, tore it the rest of the way and was more than disturbed by what I saw. The baby had no abdomen or developed body, and all of it organs were held in by that membrane. It died a few seconds after I opened the egg.

I have no idea about geckos, can you cut the egg early if you suspected this is happening?.. (if it’s even possible to suspect it happening).

Not sure if you can safely cut gecko eggs like you do snake eggs since they don’t deflate/have extra space like them. Usually it is a good thing to wait 24-48 hours after the first pip of the clutch to let the rest come out on their own, so this hatchling wasn’t outside of that timeline.

That’s what I was curious about Eagle, as I hatch ball pythons frequently. But crestie eggs i wasn’t sure

Thanks for the info

Bit late but yes you can. Pinch and make sure gecko is away from pinched bit, and with a scalpel slowly cut a line, then carefully open it a bit and he/she should come on out!
When first breeding We had to do this a couple times as either baby wasn’t strong enough to come out on its own OR humidity was too low as egg was ‘tough’.
Unfortunately can happen and Only way I have prevented it now for years is using a braplast tub with substrate in to incubate the eggs and touch wood to this day never had another struggle to get out!

Congratulations on your first Crestie and sorry for your loss on the other Crestie.

I haven’t bred my Cresties yet, but I’m glad you asked that question, do not only helps you, but can help others too.