I have some questions that came up recently. I saw a post in (at least I think I remember it being in) Enclosures & Setups, something about racks, so I added to it by asking some lizard questions or something along those lines. Then it was brought to my attention that the topic had ‘ball pythons’ as one of its tags, and that my post was therefore off-topic, so I deleted it.

Again today I saw a topic under Enclosures & Setups I would potentially have been interested in, but before I even clicked, I saw the tag for ball-pythons. So I guess I have 2 questions regarding that:

(Side note- I am not anti-ball python! I think they are so cute! The first time I heard that they curl in a defensive ball, I knew they were snakes after my own heart. I, too, often feel like hiding somewhere safe and curling in a ball.)

Oh and another question! I was thinking- would it be appropriate to have a category for ‘Herp Humor?’ I don’t mean a non-reptile section, but a good spot for silly reptile-related stories.

Oooh, and another question! I have some herp medical cases I could share (because they are/were my own pets), would this be of interest? They are all leopard geckos thus far, but the issues weren’t specific to leos. And, if this is something of interest, what sort of photos are acceptable to post? While I wouldn’t post like a ‘gross’ surgery pic, I have, for example, pics of a rescue animal that had suffered (extreme) neglect, pics of my gecko Pablo’s abnormal eye fairly close up, stuff like that. Just a thought as a possible way to try and bridge the divide that can manifest between hobbyists and veterinarians.

And my last question: Often efforts have been made to group posts that cover the same stuff, which is good. How long (in terms of a period of time) does one of these cover? Meaning, if someone had a question about tuataras a year ago, does it get merged with the last one? Is there max size of each post? Or max of a topic? Now- it may seem like I’m asking out of weird curiosity, but in reality I need this information so I can optimize transmission of my secret messages through reptile forum posting, with which I intend to unleash a robot army and take over the world!

In my opinion I think that a herp humor section would be cool. I would be interested in some of the medical cases and for graphic images you could do a hidden text.

That’ll teach me not to double-check the tutorial before posting!

edit: forgot to add that I love that idea!

Oh and another question! I was thinking- would it be appropriate to have a category for ‘Herp Humor?’ I don’t mean a non-reptile section, but a good spot for silly reptile-related stories.

Oooh, and another question! I have some herp medical cases I could share (because they are/were my own pets), would this be of interest?

I would greatly be interested in a category like what you are describing! I’m sure the mods would be cool with making something like that happen (within reason of course). @eaglereptiles @t_h_wyman

Shouldn’t these posts go under the Ball Pythons Category, if they are intended to only be in reference to ball pythons?

The reason that the Enclosure and Setups subcategory is in the All Reptiles section is because if we put it in Ball Python it would also require one in colubrids, giant snakes, lizards and so on. By the end of it we have 15+ more categories that all serve the same purpose.
I encourage the use of Tags because then you can go into the E&S subcategory and search for that specific tag and it basically does the same as giving it it’s own category. 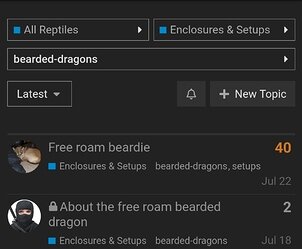 should that not be in the title?

Personally I would request that people make their titles as clear as possible but that is why the tags are visible under the title.

I like this idea, the only problem being I don’t think the amount of content would warrant a whole category.
We have Lighten the mood! (memes) and Show your silly snake pictures! (pictures) already and I can’t think of much more other than a video thread… I’m willing to be convinced though.

I have some herp medical cases I could share (because they are/were my own pets), would this be of interest?

Absolutely anything that doesn’t break the guidelines. If it’s something extreme, then make that clear in the title to warn users that wish to avoid it.
We will work on a individual basis as we are constantly working to improve the guidelines, so you may bring light to pictures we may need to add to the “not allowed” list.

if someone had a question about tuataras a year ago, does it get merged with the last one?

Yes, if it was the same question. This isn’t to discourage new topics at all, but rather to keep information together and as easily accessable to new users as possible.

There is, I know it’s quite high though. Give me a moment and I’ll search for the precise character limit.

I think that’s all of them

That is a long of typing, only 8 thousand more and it could be called a Novel

I’ve hit that limit a few times making the encyclopedias

It comes around quicker than you would think, especially with links and pictures taking up some of that limit.

Well I am really in to a good read so I think I am going to read through them all.

Most of your questions seem to have gotten a bit of an answer but I want to touch on the tag one.

Within the Enclosures & Setups subforum it is possible that the question you have might be from your position as a lizard keeper, even though the thread is tagged “ball-python”, your question could have be more broadly applicable to reptile keeping and so it would have full merit. Under that broad umbrella, I actively encourage you to ask the question.

It is also possible that you are not sure if the question is relevant but you can still see how it fits with the flow of the topic. In that case, again, I actively encourage you to ask the question. Why? Because while superficially it might not seem relevant, the conversations it sparks might in turn end up benefiting the OP of that thread, yourself, other participants, and the forum as a whole.

The only time I would ask you to not ask your question is if it is very plainly not related. So if the thread is a how-to on setting up a 70qt tub rack for keeping 1.8m and larger animals and your question involves setting up communal Nephrurus groups in a 15qt tub, that would be a case where I would want you to start your own thread.

And if you do ask your question and someone ends up flagging the question as “off topic” then do not sweat it. One of us Mods will check it over and evaluate and, unless your comment is egregious, offer a gentle correction where neded. I would like to say that we all have a pretty good eye for good, broad conversation versus total derailment

I have some herp medical cases I could share (because they are/were my own pets), would this be of interest?

This is something I think we might be able to discuss with @john but I have concerns about the potentially graphic images that may also come from it. Personally, I am not against surgical pictures and things like that when they are posted for educational purpose (I have pictures on my phone of my GBK getting a kidney tumour removed). But some people do not have as strong a constitution as I have and they might be upset over that kind of thing. So if something like this were to happen we might need to enforce the use of a “graphic” tag and mandate [GRAPHIC] be put in the thread title as a very blatant and up-front warning to anyone entering the thread.

This is just my thoughts, obviously John would have to make the final call on anything like this

Thank you everyone for the info!

I have concerns about the potentially graphic images that may also come from it.

Me too! I wouldn’t share necropsy pics or anything like that, but I want to be sensitive to those viewers who might be upset by pics of an animal that didn’t make it (my own animal), exhibiting neuro problems, failing to thrive, etc. While some of the stories have a happy ending, some do not, and I know that can be sad.

I would be happy to send pics to someone for opinions/pre-approval before each post, or I could go over cases, but only with happy/safe pics. If I do and up doing any of these, I’d definitely add any appropriate tags/things in title/hidden with a warning but clickable. The last thing I want is for someone to tell me they are offended by me sharing stories that have a lot of meaning to me.