I bought my first sand boa for my 6 year old after having a bad experience with a ball python 20 years ago. I decided to get him after alot of research and handling other sand boas. He seems very healthy and bought from a good reputable breeder. I tried handling him but he flailed around and bit several times and then defecated. The breeder never held him much and he’s about a year old. I can’t let my daughter handle him like this. I was hoping to find some help as to what others suggest or did to be able to tame down their snakes to at least be handleable if that’s possible. Any and all help are appreciated and welcome. The breeder suggested to only handle once a week for a month and to cup him in my hands to calm him down. I have a heat mat connected to a thermostat that fluctuates between 90-93 degrees on the warm side. About 2-3 inches aspen substrate. Middle of tank is 80 and cool side is 72, he is normally in the middle. I have a hide in the middle, water dish on cool side, and succulents all over. Humidity is around 40. Glass is covered on all sides. He ate twice within the 2 weeks I’ve had him without issue or hesitation even ate off tongs the first time eating fuzzies. Thank you 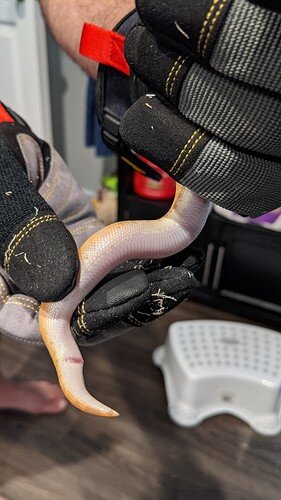 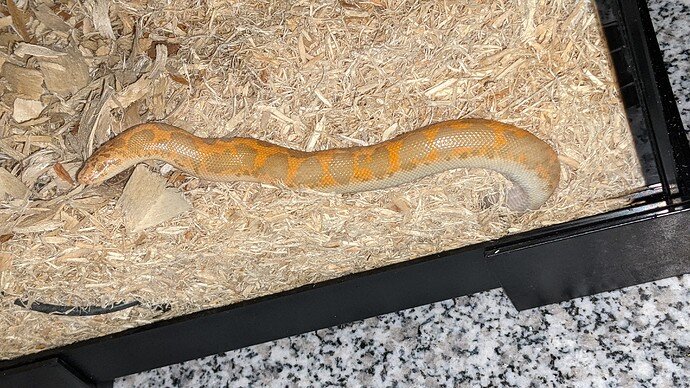 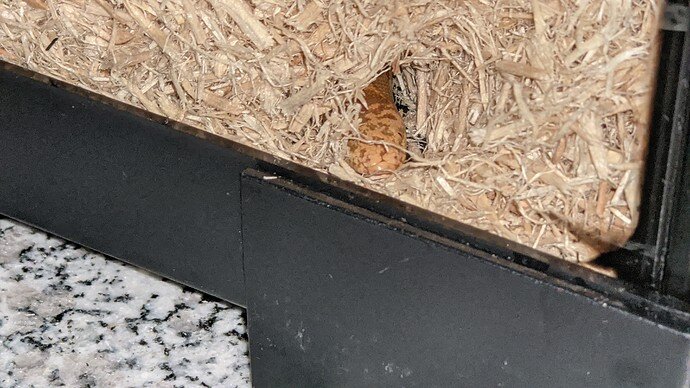 The flailing behaviour is pretty much par for the course with this species. They are strictly fossorial so being held aloft freaks them out. The more contact they have with you, the less likely they are to feel imperiled so try keeping 75% or more of the animal in contact with your hands/arms. You can also try sitting down so that you can use your lap as a further support.

Beyond that, I would suggest contacting James Lewis of The Reptile Gumbo Podcast/Simply Serpents as he works extensively with these and can likely provide additional info

I will, thank you so much for the reply. I’m gonna try sitting at the table next time. The only reason I landed on the sand boa was size, the fact that they’re docile, and slow. None of which are completely accurate. I’m more than willing to put in the time though and hopefully one day he calms down a bit.

As Travis said, they are a snake that feels more comfortable on the ground. So it is best to use a hook when reaching in so they know you are there and don’t bite out of fear. Then lift their body up a little and slide your hand under them and then left them out of the enclosure. You can use gloves to handle him but with time he should calm down.

Thanks for the reply! I did try the hook and failed, I need more work with it and he’s pretty fast. Gloves work really well and dumping some substrate helped. I’m gonna try what you suggested and place him directly onto my hand and then cup him in my hands over the table until he calms down. Once he’s calm I’ll just let him explore and then place him back calmly so he knows he’s not going to get killed and every interaction is a good one. Hopefully with time and some work on my part he’s more handleable. Thanks again for the advice.

Did you let him settle in at all before bothering him? They need to settle in without being disturbed for at least 2 weeks. Blacking out 3 sides of the enclosure and keeping him out of the busy areas of the house is also a good plan. Is that an electrical cord in the tank btw?

Yes 2 weeks and he ate twice. 3 sides are now covered and no that is a temperature sensor for the thermostat on the hot side

Do you have it set up so he has a UTH?

If you do just have a UTH the probe should be sandwiched between the mat and the glass on the bottom. You shouldn’t have the probe inside the tank. If he were to ever dislodge it or urinate on it, it would cause the UTH to overheat dangerously.

Try slowing way down. Most of us (I used to be the same way) want to handle them on our terms no matter how gentle or patient we think we’re being. Watch it’s movement when it doesn’t know you’re close by. Most snakes move verrryyyy slowly. Try to match that speed when you begin an interaction. Might help to watch some handling technique videos, especially anything with proper venomous handling.

I do rattlesnake removal and relocation for my county wildlife rescue, humane society, etc. Until I learned to handle venomous snakes, I never realized that me being gentle could still be very rude to a reptile. Most of us are pretty rude handlers at first, but a staggering portion of the hobby doesn’t grow out of it. Handling venomous snakes teaches you to work at a speed that they can understand as not being a threat. Applying that to any species usually gets you to trust land a little quicker.

Think about their natural history and it makes a lot of sense. Anything large and fast in the wild, is either going to squish a snake, or eat it. Your hook is completely alien and, and that’s without the big naked ape in the picture. The goal is to put in the time to build an understanding of each other.

You have to teach it that the hook is ok through association. As it gradually tolerates you more, you can be incrementally more forward in your handling approach. As much as possible it helps to be on a similar plane, and don’t hover over it. My blood python was named Satan when I got him. You wouldn’t believe our relationship, compared to that with his previous owner. However, he was my first truly fossorial snake, and I had to make a lot of adjustments to my methods of handling for some of his quirks.

Something else that is critical in my opinion is to always end on a good note. Snakes have impressive memories. If it sucked the last time ya’ll hung out, they have no reason to believe that it won’t suck this time. It doesn’t have the capacity to like or dislike you. You have a relationship with it, and that’s not the same thing. With effort you can build that into a positive relationship where handling is no longer a stressful event and can at some point even be considered enrichment.

Most people unintentionally use brute force handling to desensitize their snakes to their behavior. Ball python breeders are especially bad about it. Nothing is going to make a neonate ball python more secure than to be forced out of a ball into a pose for a youtube video.

To distill all that down; Think carefully about how it perceives you, behave in a way it can process, and together you’ll work it out.

There is alot of information out there to the contrary. Placing the sensor in between the mat and the glass will damage the mat. Also not take a correct reading being right up against the mat. I want the temperature to be 93 on the other side of the glass and not touching. I have it secured and not in a place he can urinate on. Thank you but please keep on topic of handling.

I appreciate the time, information, and detail. I tried moving slow and using the hook but he always slithered out to quickly and lost him in the substrate. After a long time I finally caught him but by then he was completely freaked out flailing around so I gently placed him back down. I waited a week fed him and 2 days later used gloves. Took 2 times and caught him. Thanks for the hope and vote of confidence which is what I was looking for. I’m just hoping with time and work he will calm down enough for my daughter to be able to hold him. I wish there was more info out there on this with smaller snakes that burrow. I’ve been doing my research and watching hundreds of hours of videos. I got my husbandry down just gonna take time to figure him out and what works. If you have any links to handling videos or tutorials you think might be helpful please share them. Thanks again

The trick is to be patient. I know it was already mentioned but you want to go slow and nothing will happen overnight. Another example to ending on a positive note. If the snake bites, don’t immediately put the snake back in the tank, wait until he slows down and is calm. Otherwise he will associate biting/struggling with “escaping”.

This is the species I work with the most, but it’s also the only species of snake that’s ever landed a bite on me. I’ve found that they get particularly very agitated when placed on hard smooth surfaces. They don’t telegraph their strikes the same way other snakes do (they don’t go all S shaped), and they strike sideways. That said, they have one of the most insignificant bites I can imagine.
My best advice would be to move with confidence whole handling. Always start handling them around the midsection and move steadily, if you’re shakey and nervous, it’s going to set them off. Once they’re up and in the hand, they tend to settle down.
I’d also advise against handling if the snake is submerged in substrate with only it’s head/eyes peeking out. This is an ambush hunting behavior and Warren Treacher notes in his “The Sand Boa Book” that this is how most new keepers get bitten. They’re mostly nest robbers, but they also hunt by ambush like this and have been observed climbing trees to get at sparrows. Just a fun fact.

Great info and I’ll give that book a read. Thank you for sharing that.