Hello! I am just curious if there is a good growth rate for leopard geckos. I got a Mack Snow leo back in beginning of August as a hatchling only weighing 3g. Currently they weight in at 47g after almost 5 months. I’ll take some pics later when they are active. Unsure of sex, not really seeing any bulge, but I think they are still too young to show.

You can usually visually sex them around 20 grams. It grew a lot in 5 months. Is it possible that the person you got it from didn’t know all the genes of their leopard geckos? That growth rate reminds me of a giant or super giant growth rate.

I bought them at Repticon from a breeder. Sold as a Mack Snow. I’ll double check their underside tonight as well as take pictures if possible.

Forgot to mention, I’ve been raising them on discoid roaches mainly, with superworms, giant mealworms, hornworms, waxworms as treats.

Amazing almost doubled in 2 months. The roaches could be a reason why. I tried to feed my leopard geckos roaches 5 years ago. None of them eat the dubia . I ended up giving them to someone with a bearded dragon.

I’ve not heard of any issues or concerns with rapid growth rate due to power feeding in lizards, but I’m just a small-time hobbyist. I actually ran a bit of a totally subjective ‘experiment’ (note: this does not fulfill the basic needs of a legit experiment, don’t get excited @t_h_wyman!

), where I’ve been feeding 2 of my babies from this past season every single time they’re even a bit hungry, and 2 from the same pairing mostly every other day (after they were large enough to safely do so).

The results? Not much to say- they are all roughly the same size, and the ones that were on daily feeds shortly swapped themselves over to every other day. There are a zillion uncontrolled variables, but there was definitely no overwhelming difference in growth or any obvious problems.

One of my major leo-related weaknesses is that I just can’t seem to master sexing juveniles, so I’ll have to defer to others in that regard. I think maybe my issue is that I don’t breed my guys very often. 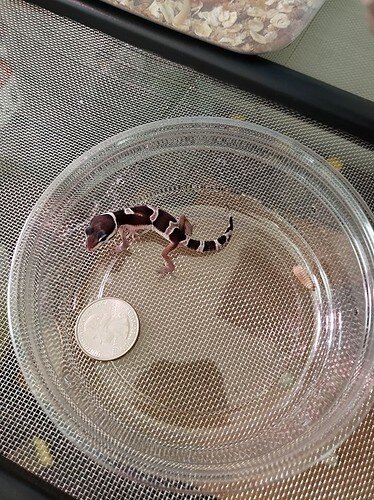 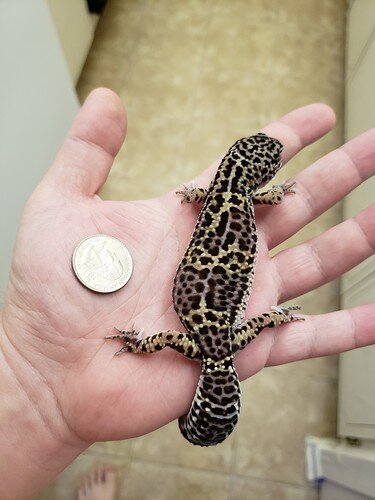 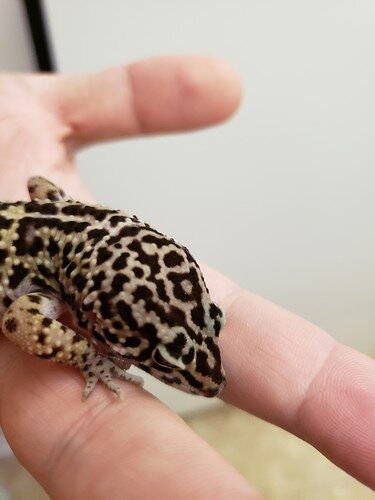 First pic is when they were 3g, and the last two are today at 47g. No visible bulge, couldn’t get a good pic.

If there is no visible bulge at that size, then it is female.

Wasn’t to sure. Some info I read stated that bulges show after 6 months, and she is only 5 months.

Oh, she’s big enough that I would think it would be pretty obvious (from the underside) if she had hemipenal bulges and pronounced femoral pores. She also lacks the larger head and thicker neck that many males have, though secondary sexual characteristics are admittedly unreliable, especially in juveniles.

If you have a known female (that she’s not housed with), you can introduce them and watch to see if she audibly rattles her tail, as a male gecko would upon sensing a female’s pheromones. A male her age might do it or not, but if she does do it, she’d definitely male.

Good to know. She is my only leopard gecko. I do not plan to breed her.

My main concern was making sure she was growing at a healthy rate. You can see from my logs she exploded in mass, then this last month barely put anything on. Not sure if it ties to it being winter time or not, or if she has reached full size. She still eats every night. I have a escape proof bowl for her food which I keep full of small roaches and will tong feed her the treat feeders once a week.

Hi! that’s a fast growth rate, but IMO is nothing to do with “giant” genetics.
Just depends on how you keep and feed the animal. Discoid roaches will make your gecko huge faster than other feeders due the protein rate. I noticed that several times.
I had some geckos growing 13-15g / month until 90-100g. If you are rotating feeders youre doing a perfect routine, good job.

Post a picture, we will help sexing!
All the best,