I’ve been wanting a tarantula for a while, and I’m feeling like I’m in a good place to pull that trigger within the next month or two. I had a Mexican Red-Knee as a kid (honestly not sure of the exact species, most likely a B. hamorii), and briefly kept a couple specimens of our local wild species as a kid before my parents made me release them (rightly so), so it wouldn’t technically be my first tarantula, but it’s been well over 20 years since those childhood experiences, so for all intents and purposes, I’m a newbie to the tarantula hobby. I’ve been heavily researching good beginner species and have narrowed it down to a few potential selections that I like. I’d love to hear from some more experienced folks who have kept one or more of these and get some feedback to compare and contrast them. Also feel free to suggest any other species not on this list you think I should consider. I’m looking for something New World that’s relatively easy to care for and generally docile (with the understanding that temperment varies between individuals and no species guarantees docility). I have no real plans to handle my T, I’d just prefer for rehousing to not be too nerve-wracking. I’d most likely be getting a sling or juvenile.

The contenders are:
-Some sort of Avicularia species (I understand their care is more or less the same across the genus)
-C. versicolor
-G. pulchripes
-B. albiceps
-E. campestratus

Eventually I’d like to have all those (and many more), the question is just which one I get first. I’m currently leaning towards the G. pulchripes due to their ease of care, availability, and beautiful adult appearance, but the faster growth rate and pretty slings of the Avicularia and C. versicolor are also appealing. And I really like all the others as well. It’s so hard to choose!

I’m a huge fan of the Versicolor. If I had to choose only one that’d be it. But a close second is the Arizona blond. I am not a fan of spiders. But those are the 2 I own and I love watching them 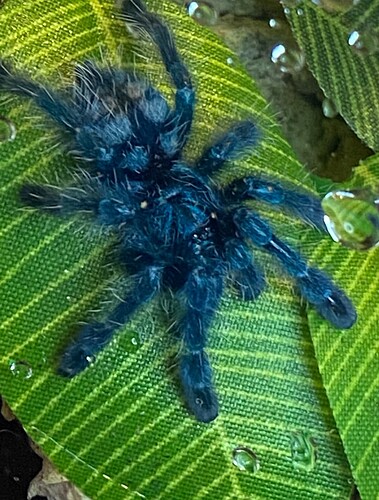 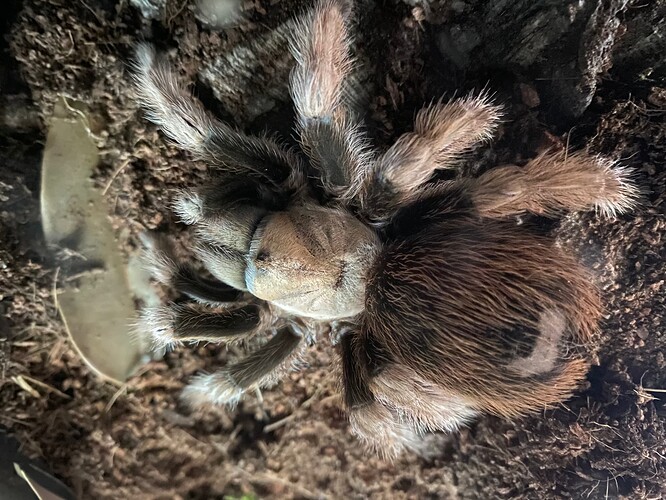 These are the best starter species on the list in my opinion. They are hardy, easy to care for, not lightning fast and generally non-aggressive.

Yeah, I love how gorgeous the versicolor slings are! That’s definitely a big selling point for me, since it would be so fun to get something tiny and pretty and watch it grow into something bigger and pretty. Plus I love how fluffy they look as adults. A. chalcodes is one of those that I really like, but didn’t quite make the final cut for totally arbitrary reasons (there are quite a few of those, I just had to narrow it down somehow). I think the main reason I didn’t include them is just that most of the sites/sellers I was looking at seemed to be sold out of slings and juveniles.

G. pulchripes seems more readily available, although when I have found B. albiceps slings in stock, they’re still pretty affordable (pricier than the G. pulchripes, but not to a ridiculous degree). B. albiceps has such striking colouration. I love how chunky and fluffy they look as adults. Definitely my favourite Brachypelma species that I’ve seen.

Aphonopelma chalcodes is the top of my beginner tarantulas, followed by most of the other Aphonopelma species. But I agree with the above recommendations as well.

Several easy New Worlds like: Brachypelma boehmei, the Mexican Fire Leg tarantula (terrestrial); Or Chromatopelma cyaneopubescens, the Green Bottle Blue tarantula (semi-arboreal/terrestrial, heavy webber); Or finally Avicularia avicularia, the Pinktoe tarantula (arboreal), and my personal favorite being the M6 variety, any of these would be excellent for beginners. They all require slightly different enclosures and care based on the types of tarantulas they are (arboreal, terrestrial, fossorial), and where they are naturally found. The Avic M6 requires more of a higher humidity setting, whereas the other two are desert and arid bushland species. Brachypelma sp., for example, are notorious for filling water dishes with substrate til dry, and do not require as close of monitoring for humidity conditions below 50% externally.

They absolutely are, and this species is also well known for taking the males down after mating… Note the extra legs in the photos, she was extremely well fed and instigated mating the entire time, before she finally went for him. 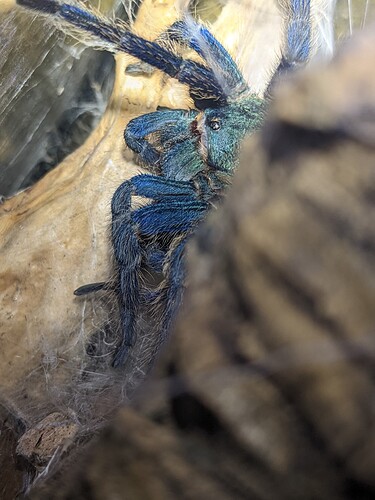 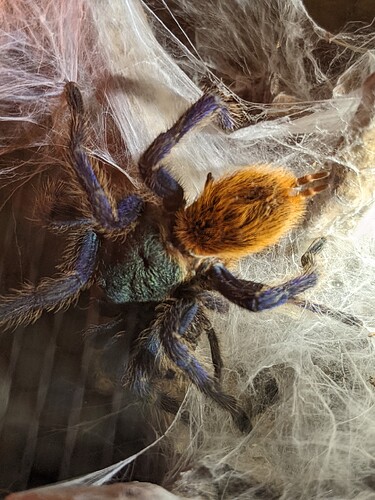 Well now I am deep intrigued by them. And you said that they can be a good one. Who knows I might get one after some research on care and stuff.

Another vote for these. I’m not great at keeping spiders but these are so easy I feel like a pro

My Brazilian Giant Blonde isn’t any harder to care for but until they mature you never see them. Even then, mine is pretty skittish.

Aren’t most of the Brachypelma really slow growers?

They grow slowly, and females can live 40+ years.

Yeah, super slow growers, and the females are very long-lived. The Grammostola genus is similar in that respect.

So guys, I’ve found two attractive options currently available for purchase, and am seriously considering going for one of them. One is a seller with some pretty reasonably-priced A. chalcodes juveniles that are drumroll sexed females! I’ve also found some G. pulchripes 2-inch slings (unsexed) that are very reasonably-priced. Both options are captive-bred. I really like the idea of being able to get something that’s not too itty bitty, especially if it’s a slow-grower. It’ll be fun to watch it grow, but it’d be nice if I could start seeing some adult colours before my hair goes grey.

I really like both species, and know they’re both ideal for beginners. Mostly now I’m just trying to decide how much a sexed female is worth to me, as the sexed female A. chalcodes are obviously more expensive. (I’ve also heard some stories about sexed “females” that turn out to be male…the seller in question is very reputable, but mistakes still happen.)

I’ve just ordered some enclosures and other supplies, so once those arrive, I’ll see how I’m feeling (and what’s still available) regarding my final decision.

You’ve got quite the beautiful femme fatale there!

I considered the GBB, but have heard they have a tendency to be a little more bolty and hair-kicky than some other options. I definitely want one at some point, but I’m thinking I should maybe start with a species that’s known for being a little more docile.

I want them because of that color and the super heavy webbing!

I love their colours too, though I actually prefer the look of Dolichothele diamantinensis (Brazilian Blue Dwarf Beauty). Their colouring is very similar to the GBB, but their body type is a little less leggy with a proportionally plumper abdomen, and their abdomen is less solid orange and more blue with red/orange highlights, which I find exceptionally beautiful. They still have the bright blue legs and metallic green carapace like the GBB. They’re also supposed to be pretty heavy webbers, though maybe not quite to the degree of the GBB. They’re also known for being pretty quick and bolty, so generally aren’t considered a good beginner species, but they’re on my must-have list once I get a little experience under my belt.

This is probably going to be my first tarantula when I get one.

I want them because of that color and the super heavy webbing!

This is exactly why I want one, I just think they would be a super neat species to have.

Also, in my opinion, they’re one of the best species to watch grow and change colors. If you’re like me, you don’t handle your invertebrates unless it’s absolutely necessary, such as during an escape, so worries about speed and defenses like venom or urticating hairs are low priority for my choices in what I keep and work with, this is the ONLY species I’ve ever been “haired” by, and it was by a male I was working on pairing up who didn’t want out of his enclosure (He had every reason to, he didn’t get away from her in the end, poor guy), and as far as C. cyaneopubescens goes, it’s not any worse than working with insulation, again in my opinion, and just as short lived an experience, as far as how long the discomfort lasts.