Help with figuring out gender!

I need some help as I don’t know what to do or think, I went to a shop to get my (Banana) ball python probed as I was having doubts about him being a male due to his growth, he’s just over a year and I can’t probe. When they probed him they said he was a female. So I accepted that, whilst I was there I saw a ball python that caught my eye (Opal Diamond) and asked if it was a male or a female, so they probed “him” and said it was a male. I then learnt how to “pop” a ball python about a month later, so I practised on the banana and he popped as Male, so it made me wonder, so I popped the opal diamond and it came out as female… so I thought I’ll go to a different shop and get the opal probed, they said looking at the tail its a Male they then probed “him” and said he’s probing as a female!

The opal diamond is 5 years old.

Just to say I popped my Male pied and he’s 4 years old and is definitely a male. I only say that as they say older ball pythons are harder to pop, which is true. Not saying I’m an expert At popping but thought it might help with this.
Thank you for the help in advance!

I’ll fully admit I’m woefully inexperienced at this myself. I probably should have been practicing all along but all of my first purchases I took over to have verified by a trusted friend/mentor in the hobby so…I have a lot of catching up to do before next year when I have my first clutches

Yeah I need to learn to probe as then I can have piece of mind, it’s all set me back for breeding this year, which is annoying. I had one guy I trusted but he’s starting to seem a little dodgy with certain things.

I’ve learned how to pop my snakes, so I pop all of my babies as soon as they come out of the egg, and then again after they all shed so I have the records right when I set them up in their individual tubs

I’ve also popped snakes I’ve purchased to verify that I got what I purchased! Older males will also have the hemipenap castings, so you don’t necessarily have to evert the hemipenes to know it’s a male if those pop out instead.

Okay, would you be able to describe the casting or do you just know? As I didn’t pop the pies out fully but I could see that they were there.

just make sure i am understanding correctly, you were questions the sex because of the rate of growth?

sex of the animal doesn’t have any affect on the growth rate in ball pythons. they each grow at their own pace.
Probing and popping each can be problematic in there own ways. Females can sometimes probe deeper than what is considered to be the norm so always keep that in mind.

describe the casting or do you just know

Hemipenal casting look like creamy colored crusty plugs that come out with just a little bit of pressure.

Yeah, he just got big in a matter of months and I explained to the dude in the shop and he said bring him in to check hence the doubts but I now have an understanding that it doesn’t have an affect now and realise the guy at the shop didn’t know what he was talking about either. With the probing a female thank you for that, I did wonder if they could probing deeper than usual.

Yeah, the casting is a waxy substance, kind of like a string. Can either be yellowish or cream colored! I’ll have to get pics if I can get some out of my males

@jai75 here you go, this is an example of casting. i hope this kind of helps (not my pic) 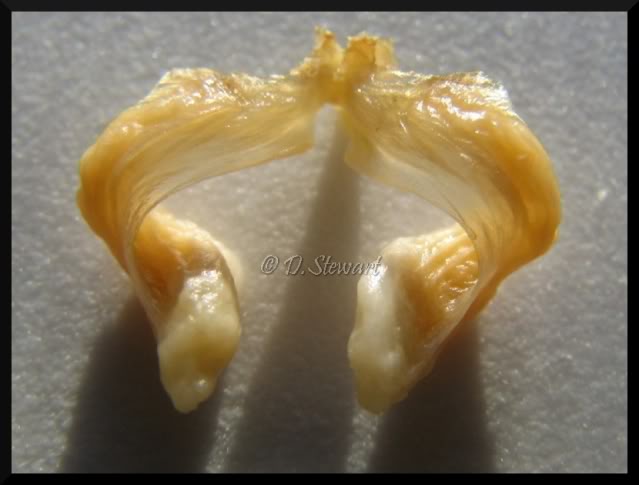