Hey Everyone! I was hoping to get some advice from you guys about my gravid Mojave ball python. She ovulated back in March and had a pre lay shed exactly 21 days or so after that. Since then it has been 34 days and I have not gotten any eggs yet. Her behavior has become very weird as well she is constantly moving all day long outside of her hide. At night she sometimes pushes all the substrate out of her hide and lays and the bare glass which scares the crap out of me cuz I don’t want her to get any burns. Here are some pictures of her in her 40 gal enclosure. Not I removed the cool side hide and foliage to spray down her tank. The have since been replaced. 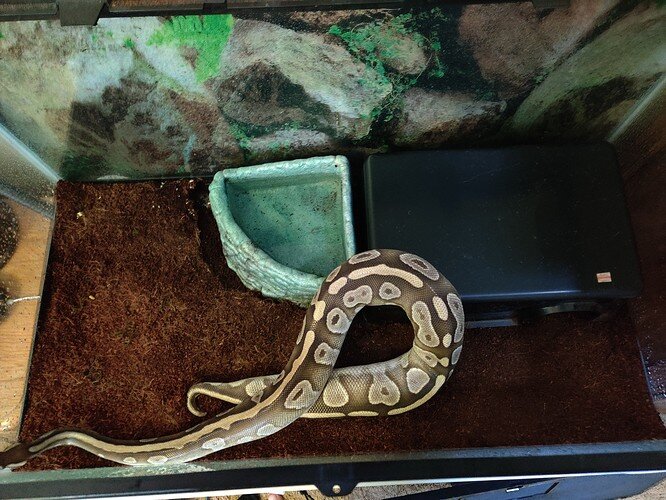 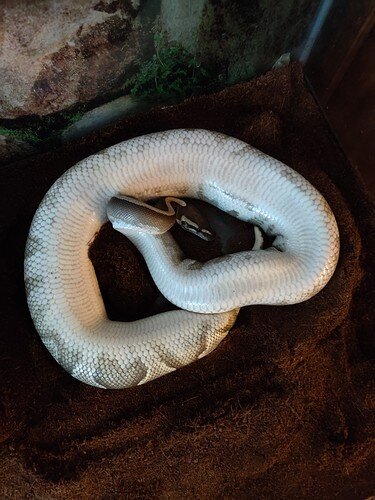 I can’t say for sure, because I’ve only had 2 gravid ball pythons so far and can only go off what I’ve personally observed, but it sounds and looks like she’s nesting. They’ll push all the bedding and moss away from the heat and around them where they’ll curl up and eventually lay (for mine at least).

With my most recent girl, she got very active about a week before she actually laid as well. I believe that might be the behavior you’re seeing? I’d definitely leave her alone though because it looks like she’s getting close judging by that last picture. Hopefully someone more seasoned can chime in, but that’s what it seems like to me.

Thanks for the input

I would cover the tank with a towel and make it dark and leave Her to lay her eggs. She looks stressed out. I agree with nmarcellus.

Our girl totally destroyed her enclosure ornaments, she was looking for a warm humid place to lay, she started acting weird a few days prior to laying.

I’d suggest leaving her be, the more left alone, the less stressed. Then she might lay.

I would take everything out of there doesn’t look like she has much space to lay. And I would leave her alone. Ball python females are not robots she will lay when she is ready. When she is nesting she will make a visible circle in the bedding.