Help with identification and ideas on future pairings

I am looking for some help identifying a ball python i acquired last year.
I will include some back story into him for those who are interested, if not, please skip to images

) and just had to get him because he looked so nice. The guy i bought him off had no clue as to what morph he is, as he got him from a friend… who also had no clue…
Although he said the reason for his sale was so “he could focus on breeding Boas” i suspect it was because he was a fussy eater… i was told he ate rat wieners fine. To me he looked a tad underweight and after a month or so of trying to offer rats of varied sizes he only took one on about week 6/7, after id scented it with gerbil bedding… tried again next feed and back to refusing

He always showed interest but never wanted, aaaaaaaanyway fast forward to now and it turns out he’s a mouser and has a bottomless appetite and drive for mice

Stressful for a while but great now, happy healthy snake

SO… i challenge you guys to try identify my male ball python Udon, he is roughly 4 years old

I was leaning towards him being a Crystal Mojave? But after a bit of research it seems Crystals have blue eyes?

He has so many subtle colours going on, pure white belly and really nice silver blue patches either side of his neck. 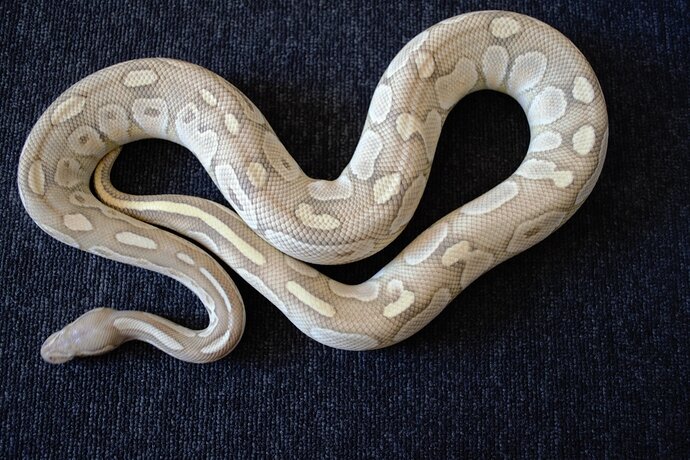 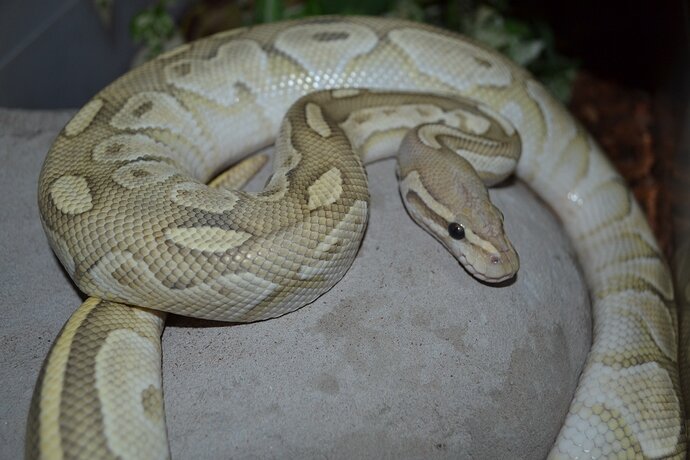 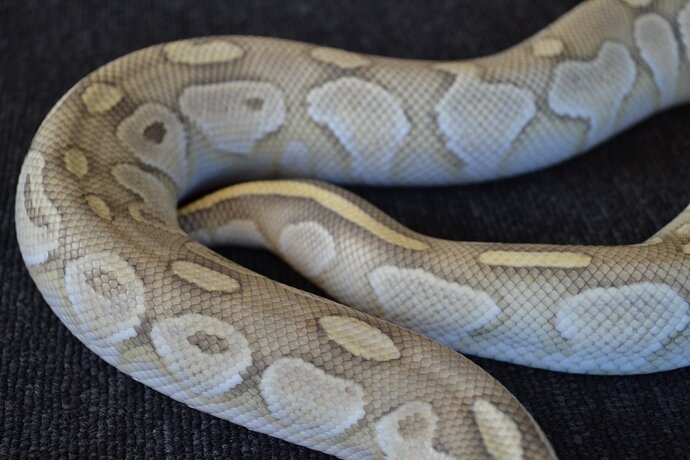 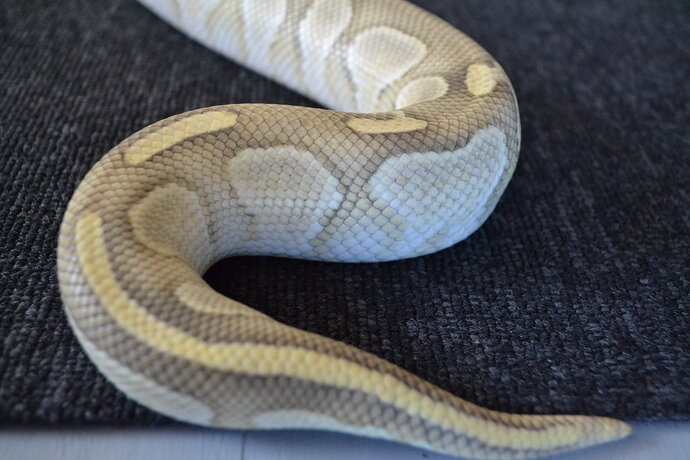 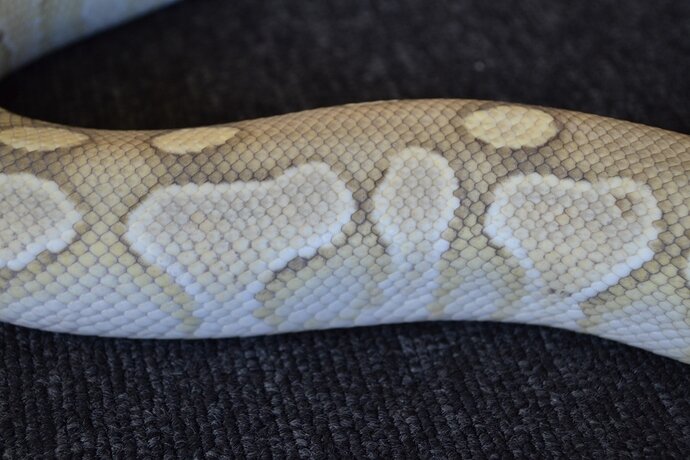 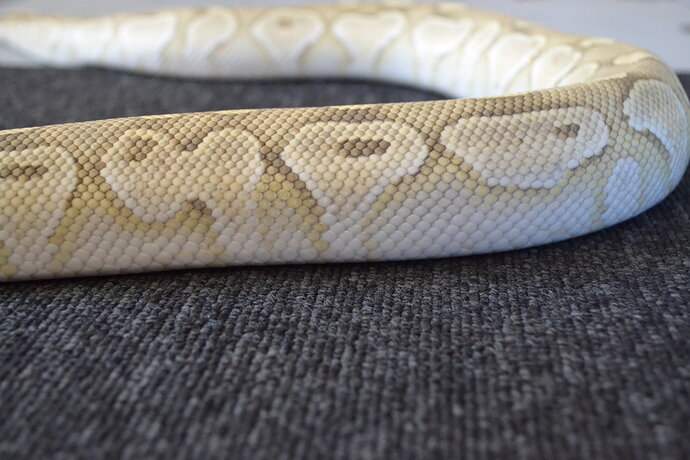 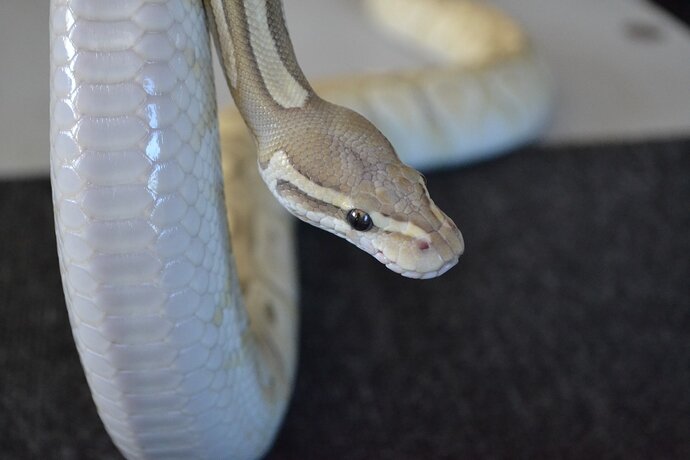 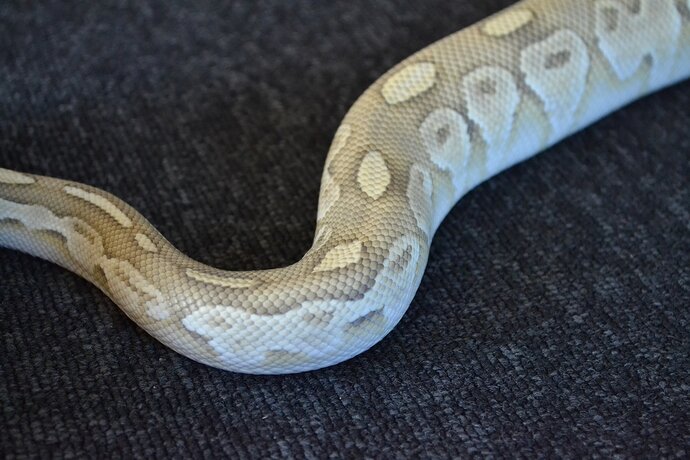 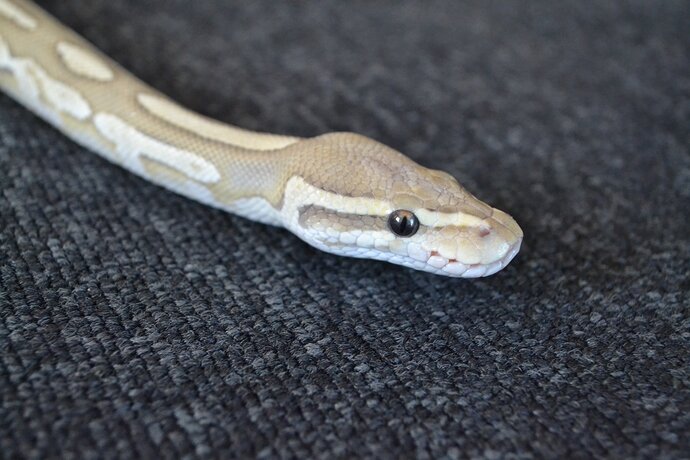 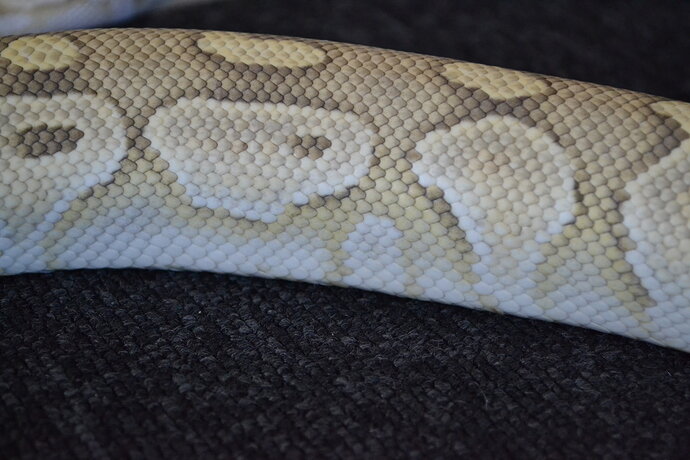 I am curious about breeding him to find out his genes or maybe even recreate him if that’s possible?

Am i right in thinking normally you would breed him to a normal to see what offspring was produced? What other pairing would people want to try?

Anyway, thanks for taking the time to read

A crystal is the combo of special and mojave. Here is a link to one;
https://www.morphmarket.com/us/c/reptiles/pythons/ball-pythons/164349
They are very yellow when they are adults, so this guy isn’t one.
I don’t think he has mojave at all, as he looks like some sort of lesser/butter(they are the same mutation) combo. I will have to search around for some that look like him later, as I have to sleep right now lol.

Its really hard to tell as most morph pictures online are of babies and juveniles and there seems to be a fair few variations.
But if they yellow with age like you said he’s probably not a Crystal then…the most “yellow” markings are his dorsal marking, more stronger yellow towards the tail.

Thanks for your input

You need to look at the pattern as well. Mojave have smaller, more circular “alien heads” with large keyholes. Lesser has some small holes but generally has larger markings without them like your snake does. The only one that looks sightly like it is the first one, and that is just because of the color. That is a hatchling crystal and they look way different than the adults.
Tell me, does your snake have clear sheds with no pattern to them when held up to light? That will help me narrow down morphs.

Basically, I agree with @ashleyraeanne that what you have is a Lesser/Butter, though the lighting isn’t the best.

As for pairing, I would personally try and get a recessive morph to pair with, then at least any normals that are produced have at least some selling or future breeding value by being “hets”.

I am going to say he is probably a lesser pastel hypo/ghost then. With those colors he should have a pattern to his shed, but since he doesn’t that means he probably has hypo. He is too light to just be lesser hypo, so pastel makes sense.

Only way to prove the hypo out is to breed him to a hypo. I am pretty sure there are different types of hypo though, so others will have to chime in and give their thoughts on the morph as well.

This is him in direct sunlight if that’s any better?.. 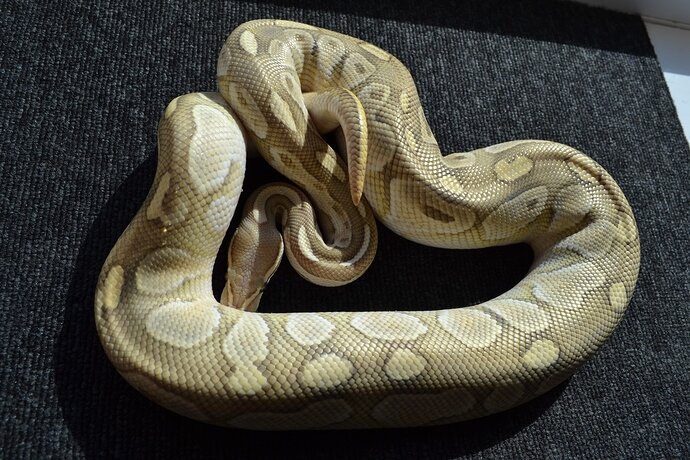 I don’t think he is a crystal, the pattern is wrong. I think he’s a hypo lesser, maybe with pastel. I’d recommend breeding to a female hypo with at least one other gene, such as a hypo black pastel or hypo pinstripe. Ideally, more than one additional gene, depending on what you can afford. You could also breed him to a different recessive to create double hets, such as clown or axanthic.

This is my 0.1 butter 3k gram roughly for a comparison 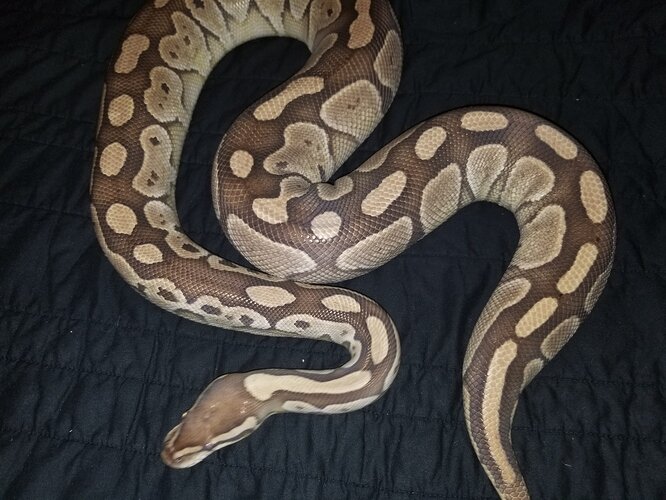 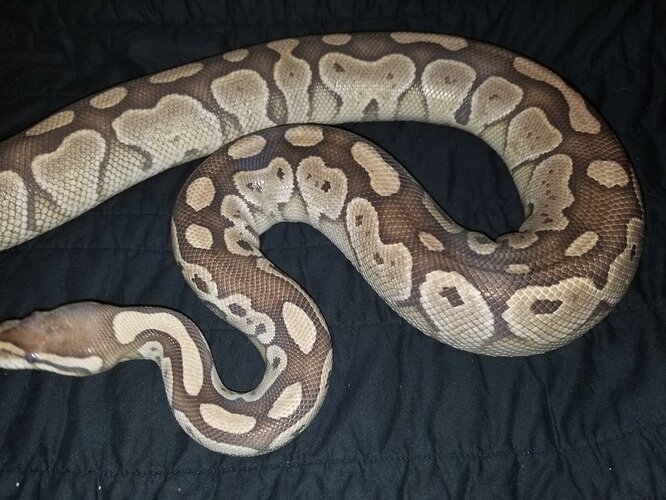 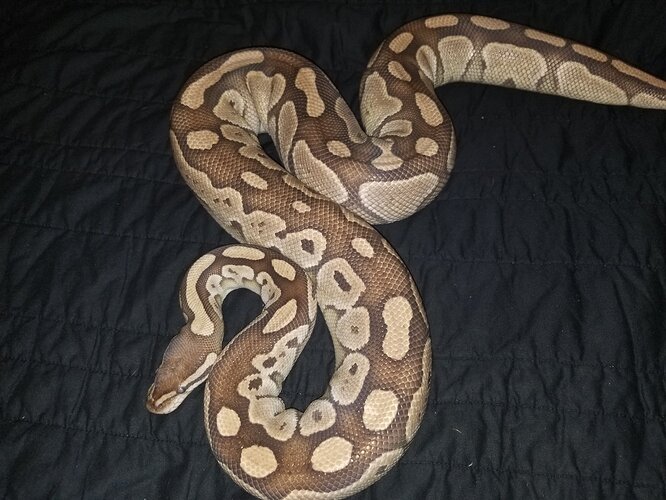 I can’t say definitively, but I looked on morph market compared and contrast it could be a banana Citrus pastel with something else perhaps fire? The colors were just not quite there for the other morphs and the patterns seemed a bit off. This being said I could be barking up the wrong tree but it looked solid

It doesn’t have banana, not citrus either and not light enough to be fire. Lesser hypo possible pastel. The adults look a good bit different than the babies as they tend to fade with age.

I mean I wouldn’t just write the gene off I saw some banana combos that came close. Plus hypo looks like it could be in the mix but from the ones I saw in MM it does not look like an absolute either. Overall the suggestions of pairing to a hypo to prove it out is a good one

I guess the only way to know for sure is to prove him/her out. Beautiful snake either way

There is too much brown in this snake for it to be banana. Too dark of brown at the tail especially. Citrus pastel is a rather uncommon gene that you usually don’t see, so the chances of it being that is also unlikely.

Unlikely but not impossible

no one knows what genes are there so it could be anything why not keep ones mind open.

Without knowing the pairing, it’s going to be a guessing game. Looks like it has lesser in it to me though.

If you end up breeding him, you can breed him with a recessive gene of your choosing and all the offspring will be het for that gene on top of what ever else might be in him, and there won’t be to much influence on the unidentified genes.

I am still rather new on the breeding side of things, learning daily

Thanks for all the input guys