I’ve been waiting forever to pair these 2!
I haven’t seen many forums regarding banana female maker to a banana female, so if my math is right, I should expect 2/3 chance of female bananas and banana pieds and supers should be all female. With the ratio of non bananas being flipped.
Pairing is a banana het pied female maker X banana pied. Either way, this pairing is my most anticipated and im really excited to see the results when the time comes. 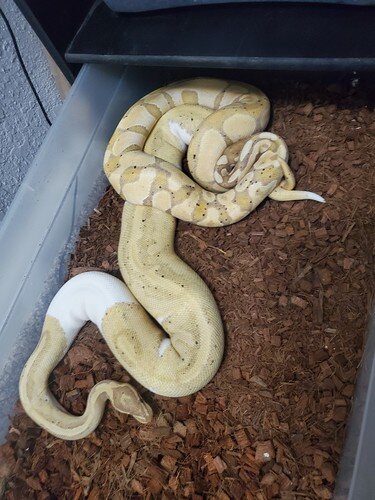 All of them will be possible female makers also. You can calculate that into the calculator too.

I was specifying the bananas specifically with the gender ratios not the regular het pieds and pieds.

I was talking about the gender ratios of the banana outcomes. Not the genetic outcome of the pairing.

As specified in my other comments, my post wasn’t about the genetic outcome. It was the gender ratios of the banana combos that can be produced from this pairing.

My post may not have been clear enough.
However I already know genetically what to expect with this pairing. My interest is more in the gender ratios with the bananas and super bananas specifically because I don’t see many threads or posts about gender outcomes from banana X banana pairings. Only pairings with one banana. And i havent seen anyone really break down the results they’ve gotten.
My thought process being… if the male does prove to be a female maker, and females can produce either male or female, then there’s a 2/3 chance of female bananas and 1/3 chance of male banana female makers. With supers likely being female. The pied and het pieds, im curious to see if there’s a 2/3 male and 1/3 female ratio for the same reason stated above.
I chose the male specifically because he is a female maker in holes of having higher chances of female banana combos in particular.