How long is to long w/o eating

I have a female super snow RADAR who was eating fine until she started ovulating. She has not been with a male. She hasn’t eaten in about a month and is looking pretty thin. I believe she reabsorbed the eggs the first time. Then later she laid one egg, and a week later laid another, which I though was kind of odd. I’ve seen her out walking around a few times since laying and she seems okay other then looking skinny. I’ve offered everything I have access too. Meal worms, super worms, wax worms, crickets, calci worms, and roaches. I dont see more eggs forming in her. At what point should I consider trying to force feed her? Or is it normal for them to go off food for this long during breeding season?

How thin are we talking? May I have a picture? What kind of set up does she have? - my females refuse to eat until they lay and even then, they may refuse for a couple of days until working up their appetite. What do you use for heat?

Shes in a tub set up with reptimat and an under tank heater on a thermostat set at 86. She has a regular hide and a moist hide with moss. I leave a dish of mealworms in at all times but she hasn’t touched them. 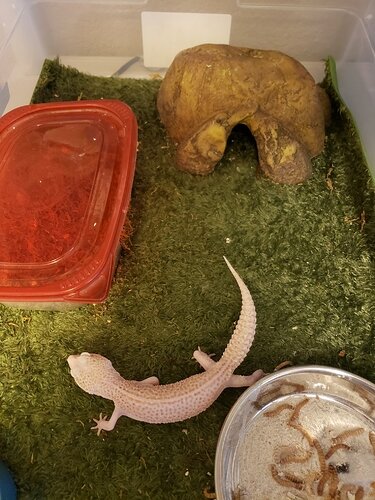 Do you have a temp gun to check the surface temps in the tank? They need a hotspot of 90°F (some say even as high as 95°F is good, but I am not positive of that). That mat/plastic will block some of the heat, so it is likely way too cold for her to even digest anything. Also, mealworms are just crispy bits of fat with no real nutrition. Silkworms, small hornworms, dubia roaches, and black soldier fly larvae are better and will let your gecko live a lot longer life.

I dont have a temp gun. I live in Alaska and dont have access to silkworms. I’ve tried roaches, mealworms, superworms, wax worms, calci worms (aka black soldier fly larvae) and roaches which she showed no interest in. I have all my geckos set up the same way and none of the others have ever refused feeding. I’ll try increasing her temps though

A temp gun is a necessary tool to have when keeping any reptile. Especially if you need a hotspot/any sort of heating equipment managed by a thermostat. You have no way of knowing what the actual temps in the enclosure are, given the fact thermostats can stop working at any moment. It can take some work to get geckos that prefer mealworms off of them, but it is worth the work. Also, don’t feed wax worms, as they are even worse for your gecko and notoriously addictive. Superworms are mostly just chitin and not very good either. Crickets are another option as well, but are a bit higher in chitin that dubias.

I would suggest switching to paper towels or a thinner mat for her. Those carpets are thick and I don’t think she’s getting the right amount of heat she needs. I have had to tong feed most of my leopard geckos - especially when they become stubborn during this season. Do you tong feed? I always suggest if its an option to see an exotic get - I know not everyone can afford it but if you can I strongly suggest it. It may be something else - if you happen to adjust the suggest things and she does not show improvement I would definitely take her.

Also - is that calcium powder in with the meal worms or something else?

I’ll switch her to paper towels tonight. I do have a thermometer probe under the mat. And I do tong feed most of my geckos. I know meal worms and wax worms are not Ideal, I’m simply trying to get her to eat anything right now. And yes that is calcium powder

Thank you guys so much! Simply switching her to paper towels made a huge difference! She ate two wax worms and two decent sized horn worms. I didn’t want to give her to much, so I’m going to try some roaches tomorrow. I’ll be removing the mats from the rest of my Leo’s enclosures as well. I didnt realize how much heat they lose from those.