How old is Blenny?

Can you tell me roughly how old my Veiled Chameleon, Blenny, is?? (The grey pic isn’t his actual colors there is a filter on the photo he wasn’t stressed or anything. Green pic is actual colors) 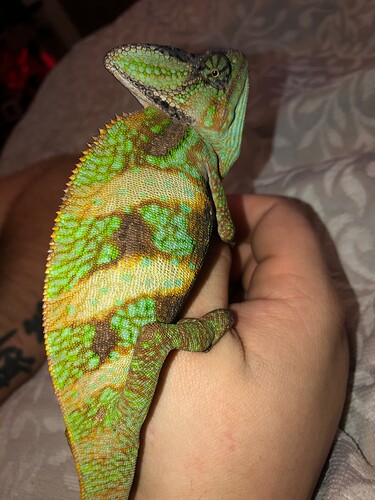 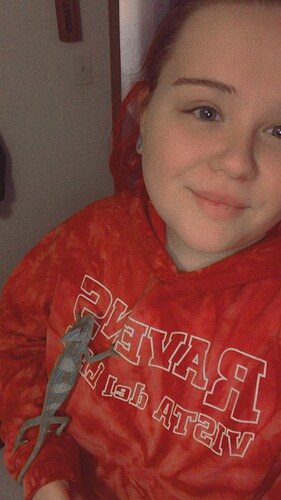 I mean, We can’t tell you how old he is, appears to be nearly an adult and that’s as far as it goes

Looks like he has more growing to do as they do get bigger… Or he could be small and be 5? We can’t tell you an age I’m afraid… As we don’t know is he’s just a smaller one.
Is there a reason you don’t know?

I got him from my local exotic pet shop they said he was a few months old, but was unsure exactly how old he is haha I just wanted to get a rough estimate to celebrate his birthday lol They also had told me he was a girl (clear indicators that he is a boy) so I didn’t know whether to take their word for age or not

A few months??
Yeah no…
He’s older than that, at least 1 I would say judging by the size of him…

Another thing, any pics of back feet? I don’t see any spurs?

If none then he is Infact a she… 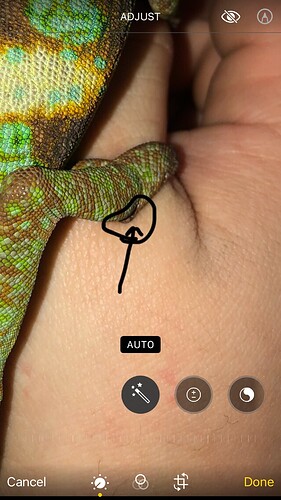 Dang they got it very wrong haha

Right! Lol that’s why I was so unsure if I should have went off of what they said as far as age went as well lol

I’m no expert, but I’m inclined to agree. Granted, “a few months” is pretty vague. It could mean 3 months, or it could mean 9 months.

My roommate’s veiled is probably about 3-4 months old (we rescued her when she was teeny tiny, smaller than my thumb, and have had her about 3 months), and she’s a good deal smaller than your boy there. A year, give or take a couple months, sounds about right based on my (admittedly imperfect) understanding of their growth rates.

He’s a very pretty boy! Chams are such cool critters.

Okay awesome thank you so much!! They’re so fascinating aren’t they?!

Chams are amazing.
We had panthers, passed now. But I’d love another one day!

They are indeed. I especially love watching them hunt and eat insects. So freaking cool!

I’m mostly into snakes these days, but if/when I get back into keeping lizards, I’d love to have one or two species of chameleons in my collection.