How to cover reptibreeze mesh

Following because I’m curious. I haven’t seen a lot of Chameleon love on here. I’m sure it exists, maybe the chameleon gang just checks in more sporadically lol. I joined another unnamed chameleon forum for chameleon specific inquiries.

Over the weekend I got my first chameleon. A beautiful Jackson’s named Bubba. 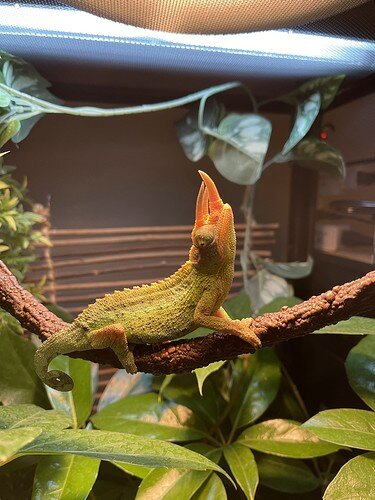 Chameleon academy has answers for that. I listened to hours of the podcasts to learn stuff. They recommended great stuff pond and stone to customize your foam background. He also suggest a bunch of options for liners to keep humidity in. 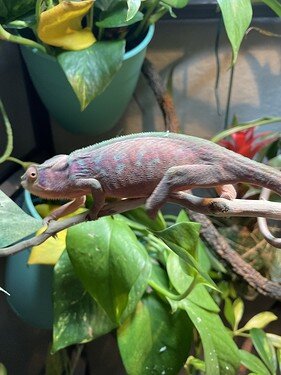 This is my wife’s female ambilobe. We don’t have humidity issues luckily down south

We don’t have humidity issues luckily down south

Nope we don’t, relative room humidity is 75% where I am at in south Florida.

I personally was all set with not getting a chameleon. We had talked about it, but settled on not getting one. They are beautiful animals, but I prefer snakes. My girlfriend prefers lizards.

My girlfriend and I went to a chain pet store for some stuff for our fur babies and like every reptile enthusiast we had to look at what they had available. There was our Bubba with his perfect little horns and greenish teal colors. I was so taken with him that we left and got everything we needed for him and went back later that day to take him home. Blew all the money we had saved up for a local expo but it was worth it.

We have a vet appointment set up for him later this weekend like we do for all of our new intakes. Good thing too because from what I’ve read on the chameleon academy site is true, thanks @ggjr, he is displaying signs of an RI. He’s doing it in the photo I posted. I thought he was just doing a majestic bask in the heat, but they said that if they have their head lifted up like that it is a sign of an RI and being a pet store lizard I’m not risking it.

Also, shame on chain pet stores for selling animals that they have ZERO of the appropriate equipment to care for that animal. I hate seeing it and it is everywhere where I’m from. No screened cages, no thermostats, no hygrometers. What a cluster f. As if that wasn’t bad enough they were keeping 2 Jackson’s, a male and a female, in a low, long enclosure. The female was covered in stuck shed. She looked like she was covered in scabs. It sucks. I wish with all of the regulations they love to push in NY that they would further regulate the sale of live animals in pet stores.

i absolutly hate that , i built a custom enclosure for mine out of old screen doors so its 3x3x5 and I’m working on doing a background for it

That sounds really cool. I’d love to see some pics of the set up if you’re willing to share. I love DIY stuff like that. I go to a local flea market and they always have high quality older furniture. This summer I am going to buy a few pieces, refurbish them and convert them into terrariums.

This type of stuff. This isn’t mine, but kind of what I am going for. See if there is a market for it around me and try to start a small side hustle. 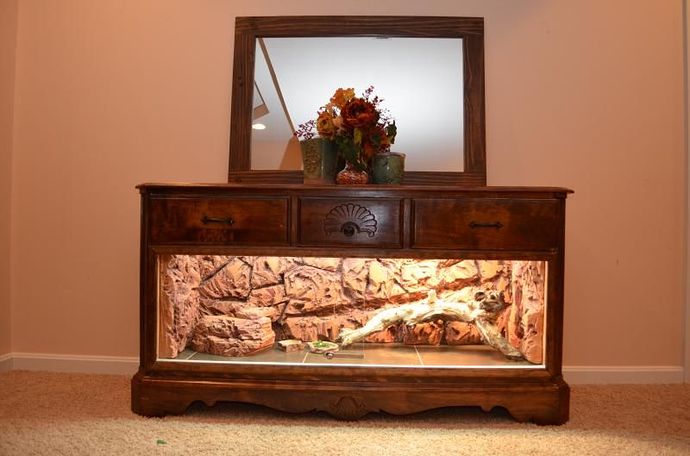 totally will share pics once im done , I’ve just recently converted an old tv hutch like that into a terrarium for my leopard gecko and i lovee it

Those of you who have built these… Where do you get the hardware? Do you need to temper* the glass?