How would you like having this guy as a neighbor?

Are you living next door to the world's biggest Burmese python?

Are you Hexxie's neighbour? The 110kg python could be the biggest Burmese python in the world - and she lives in a three-bed terraced house in Tewkesbury. The snake can eat a whole deer in one go and has a mouth full of hundreds of pin-shaped teeth...

The 110kg python could be the biggest Burmese python in the world - and she lives in a three-bed terraced house in Tewkesbury.

The snake can eat a whole deer in one go and has a mouth full of hundreds of pin-shaped teeth like fish hooks.

Owner Marcus Hobbs bought Hexxie nearly eight years ago as a small house pet, but the last time he measured her she had grown to an incredible 18ft long.

The current record for the longest Burmese python is 18ft10in, but Marcus is adamant that Hexxie has grown since he least measured her, and could have broken that record.

A local reptile expert claims she is the biggest he’s ever seen.

Most snakes aren’t measured until they die so experts say it is hard to find out if Hexxie is officially the world’s biggest. 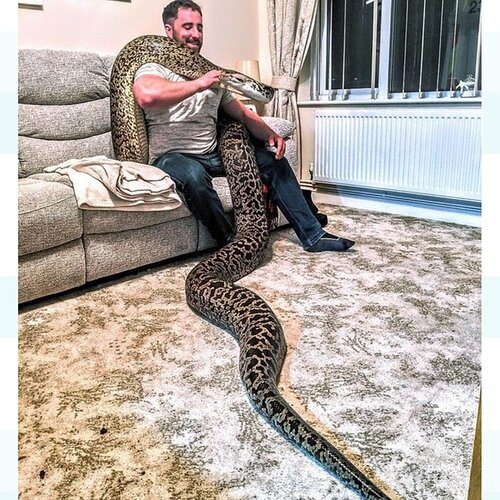 Marcus says the reptiles have to be treated with respect by an experienced handler, and the nearest he came to be being attacked by Hexxie was when when she stood up in strike mode as he tried to apply iodene to her skin infection.

“She went for me,” he said. “Not properly, more of a back off, get away type of thing. She’s nipped but she’s never latched on".

That’s a nope from me

I love burms, granite morphs in particular. (had many about 18 years ago) but they are so cost prohibitive I won’t keep them again (for now at least)… Now that said, I’d love to have a neighbor with a big beauty like that I could help with on occasion.

though she is beautiful and healthy. So long as she never escaped l would be fine with living next to em.

So would you call this a mega danger noodle?

Lol. Noodle alone makes me cringe every time mega danger noodle is too much for me.

Id love it. Im only 4’11" also, but I would be over there daily asking to interact with that beautiful girl

Probably worse than anything you have ever seen.

It would be the stuff of nightmares haha

I’d love it. We would most likely become really good friends. I’d even offer to petsit for him.