I have a few questions about Hypomelanistic Kenyan Sand Boas. I have done some research and am having some trouble finding information specific to Kenyans. It is a co-dominant trait correct? How does it typically express itself visually? Two of my Kenyans, Normal DH Paradox Snow, are much more yellow or blonde and chocolate than my other two. Both of which are much closer to the traditional black and orange markings. Is this an expression of hypo or just part of the color variations with KSBs? I will upload a pic of my two females, Blondie and Piper. They are both starting to enter shed so the contrast may not pop in the pics the way it does with the naked eye. 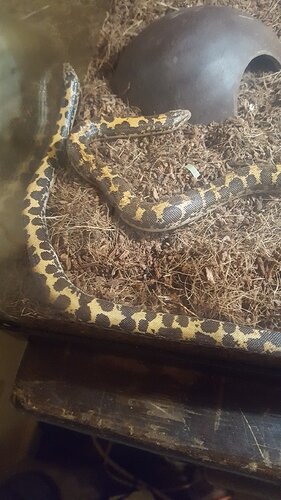 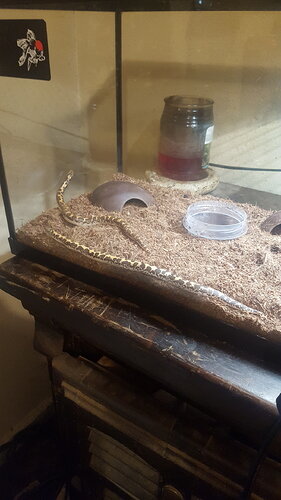 So finding info on hypo in East African sandboas (kenyans) seems to be super difficult. The Sandboa Book by Warren Treacher says it’s a recessive gene. But it literally only has a paragraph in the book about it and doesn’t state much other than it being supposedly recessive.

I have a sibling pair of hypos that I purchased from reptile collective. So I’ve gotten to watch their colors develop up close which is nice. The male is lighter than the female. I will attach a picture of him. His background color has almost faded to white. Pictures don’t quite capture it, but they are definitely different than normal East African sandboas.

I bred the male to a lighter colored flame last year for the first time and out of a litter of nine, three of the babies have started to visually look like hypos. I won’t call them that. I’ll just call the whole litter het for hypo, but it is very intriguing! I think I have more questions than answers now. This year I’m breeding the paint and Rufescens genes with hypo.

The two snakes you posted are just normals. East African sandboas can range so dramatically in color, even in the same litter, it’s easy to think something else might be at play. I’ve seen way too many labeled as hypo when they are definitely not. Mislabeling is one of my biggest pet peeves. And I see way too much of it.

I would love to hear from other people that are working with the hypo gene! Opinions on whether it really is recessive or co-dominate? 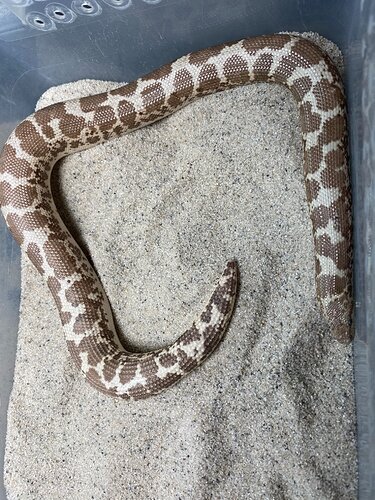 Thank you very much for your reply. Im waiting on my copy to arrive and cant wait until it does. Ive several examples of hypos that look similar as well as identical to the blondes that I have. I became curious when seeing that they were labeled or listed as hypo. I love how deep the brown is on yours, almost like a chocolate anrey IMO. Id also love to learn much more about these morphs and breeding projects.