In 2 minds whether to keep or not

Hi, every time I look at her I’m in 2 minds if I should keep her or not. Would you keep or not and what would you put with her? I’m thinking maybe putting some clown through her. 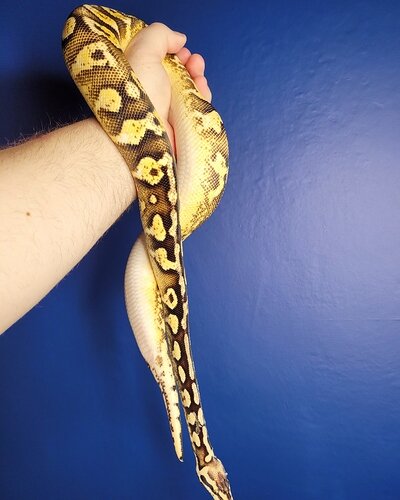 What morph is she?

At that size, you’ve done the work of raising her, if I were you I would breed her at least once. Sugar goes great with almost everything.

I agree with @westridge if you have raised her that long you should at least get a clutch off her.

Just look at the orange dream sugar/calicos. You’ll have all your answers in 1 mind once you see some of these beauties.

I’m in agreeance, if you’ve done all of the work to get her grown why not get a clutch from her! I personally think adding enchi in there would be stunning. Anything else on top of that is just icing on the cake.

I’m thinking maybe putting some clown through her.

Since clown is a recessive trait, unless she is het clown, you would not see any visual clowns from the offspring.

I’m fully aware that clown is a recessive trait thanks.

Thanks for the advice guys!

I am going to break from what everyone is telling you.

Just because you have raised her up is not reason enough to breed her. I have raised a fair number of animals to breeding age/size and never bred them because when the time came I looked at them and asked myself the very serious question of “What benefit do I bring to my collection if I breed this girl?” And when I looked at the projects I had and the goals I wanted to reach I would realize that I had kept the animals not because they were good for my projects but because they were novel or pretty or unique.

Do not breed just for the sake of breeding, there is already too much of that in the hobby. Breed to build your projects. Breed to make the things that you want to take your collection forward, not for the things you think you can sell to make money (unless your goal is to be a seller first and a keeper second)

Thanks for that great post. I’ll think on everything that’s been said.

Not wanting to spam the board with another post: I put this boy in with a fire girl and she seems to have bitten him quite badly. I’ve kept snakes for decades but this is my first year of trying to breed and indeed this was my first pairing so it’s kinda put a dampener on things. Is this a common thing or bad luck? I’ve treated the wound and separated them again obviously. 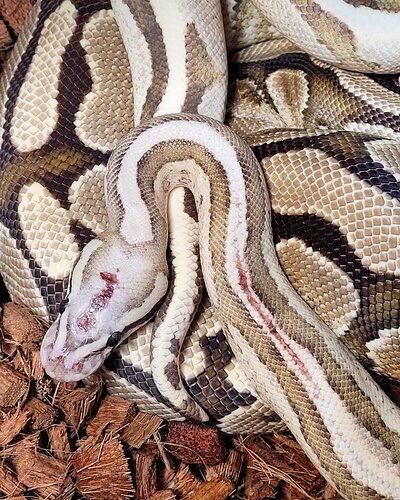 That doesn’t look like a bite at all, that looks like the male scraped up against something sharp. There’s a red line on his neck too, which also looks like it was scraped.

Is there anything sharp in the enclosure?

Nothing at all. It’s a plastic tub with cocoblox substrate. The line on his neck was blood, it washed off.

What the heck?! How could their teeth even make a wound like that? Basically one big tooth mark on top of the head and nothing around the sides from the other teeth?
I would have sworn it had to be some sort of scrape as well. Lid?

It’s clearly a scrape type wound, look 2 spots, can see it happened “front to back” because there are a couple of the scraped off sales at the end of the wound.

I just have no idea if it’s possible she latched on to his head from the side and he bolted forward, thus scraping off a couple scales but breaking free? I would gently pry her mouth open, Check for any trace of blood on the teeth of her top jaw.

Any trace of a wound on the underside of his head or jaw as well which would line up with her bottom teeth if she grabbed him?

Just seems so unlikely because if she grabbed his head suddenly you would expect him to pull “back” not bolt forward to get out. Really looks like he did that himself somehow on the lid, something sharp on the “ceiling?” Etc…I guess nothing is impossible I just don’t see how it happened. Mystery for sure let us know if you find anything else out.

Never heard of such a thing. If my first attempt at a pairing after 2 years of work ends in a domestic violence case I’m gonna be so sad

Yeah, I really don’t think it would be from a bite. There’d be several puncture wounds, both on the top and bottom of the head.

Not to mention I don’t think it’s all that common at all for a female to attack a male in general. The most I’ve had my females do is tail wag and drag their scent glands all over their tubs. And poop and pee everywhere while they’re at it

If there’s any way he can push his head against the top of the tub, he may have scraped off his skin that way. I had several hatchlings do that in a rack that wasn’t built securely. 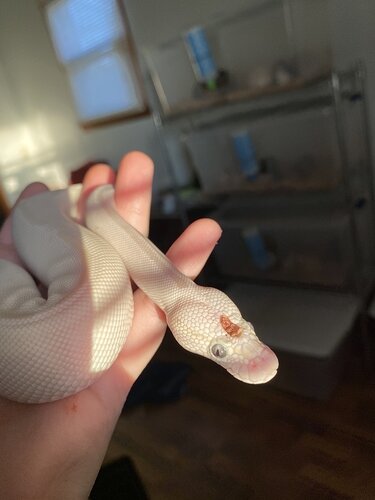 It’s a little more healed over now as of this photo but this was one of the hatchlings that hurt themselves in their escape attempt.

Thanks for your replies guys. They’re in a rack with vented metal between layers so I just take it for granted that it is well finished and safe. I’ll pull all the tubs out and have a feel for sharp edges.